Is Bernie the New George McGovern?

by Michel A. Genovese

Michael A. Genovese is President of the Global Policy Institute at Loyola Marymount University. The author of 50 books, he appears frequently as a political commentator on television and on radio. 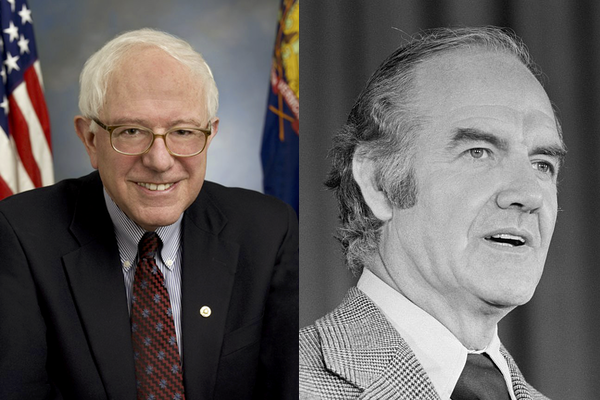 It was close, too close to call in the problem-filled Iowa caucus, but Bernie Sanders and Pete Buttigieg were in a virtual tie for the lead. A week later, Sanders barely won the New Hampshire primary.  He will have some serious problems when the Democrats vote in South Carolina where Joe Biden is struggling but still strong, but as of now, Bernie Sanders, Independent, Socialist, far-left Bernie Sanders is the Democratic frontrunner.

One can see close parallels between the 1972 presidential contest and that of 2020. Those parallels do not bode well for Bernie Sanders or the Democrats.

In 1972, incumbent Republican President Richard Nixon entered the general election touting detente with the Soviet Union, the opening of doors to China, and the prospect of an end to the war in Vietnam. It was a strong record on which to run. But Nixon, always in fear that he might lose, decided to engage in a smear campaign against the Democratic candidates who were running to capture the nomination and face him in the general election. Nixon’s goal was to so damage the frontrunners that the Democrats would end up nominating a sure-loser in the general election. He thus ordered his campaign team to engage is a series of dirty tricks and illegal acts aimed at wounding the Democratic frontrunners.  First he targeted Maine Senator Ed Muskie, and having wounded him, went down the list of other top Democrats such as Henry M. “Scoop” Jackson, leaving a trail of blood along the way, knocking one Democrat after another out of the way. Finally, the Democrats chose George McGovern, Senator from South Dakota as their nominee, the weakest opponent in the bunch.

McGovern was the most radically leftist of the field of Democrats, and Nixon was confident that he would turn off moderate Democrats, thereby giving Nixon his much hungered-for victory. And indeed that is exactly what happened.  Nixon won in a landslide, with McGovern willing only Massachusetts and the District of Columbia. McGovern couldn’t even win his home state of South Dakota.  The final popular vote was 60.7% for Nixon, 37.5% for McGovern. Nixon got what he wanted, and more.

Jump ahead to 2020, and we can see Donald J. Trump taking a page from Richard Nixon’s playbook. Concerned that his top rival at the time Joe Biden might be a formidable foe, Trump engaged in a dirty trick campaign to damage Biden. The facts of the case are too fresh to bear repeating except to say that Trump pressured a weak nation, Ukraine, to begin a corruption investigation into Biden and his son, while withholding much-needed funds to fight a war against our and their adversary, Russia. The goal was not to uncover corruption by Biden or his son Hunter – virtually all who have studied this say there was nothing illegal going on - but to create the impression that Biden was so corrupt that even a small nation like Ukraine was concerned – and of course, so should we!  For this, President Trump was impeached, and the Republican-controlled Senate saved him from conviction.

But did Trump also damage Biden so severely that he virtually eliminated Biden as a viable candidate thereby paving the way for Bernie Sanders to win the Democratic nomination?  Is this not the candidate against whom Trump would most like to run? And as a recent essay in The Atlantic by McKay Coppins reveals, the Trump campaign has plans for a billion-dollar disinformation campaign, to be unleashed against the Democratic nominee during the 2020 race. Could Sanders and the Democrats survive such an all-out offensive?

And the President’s defenders before the Senate – in true Nixon-like fashion – defended Trump with an old Nixonian defense: “When the President does it, that means it is not illegal.”  We had thought that this imperial doctrine had been totally discredited with the downfall of Nixon, but apparently not.  Alan Dershowitz dusted off this old utterly discredited view and pressed the Republican Senators to argue – incorrectly – that the president had to have committed a crime to be impeached, and further, that any public official who “believes that his election is in the public interest” has a right to go beyond the law to promote his election bid.  As Dershowitz said (with a straight face no less!), “if a President did something that he believes will help him get elected, in the public interest, that cannot be the kind of quid pro quo that results in impeachment.” Let us be clear, that places a president or candidate above the law. Surely that is not what the Framers intended, nor is it what common sense dictates.

Have we really come to this? Both Nixon and Trump illegally undermined the democratic process to tip the electoral scales in their favor.  And will President Trump get away with it?  His best hope is that he runs against a weak Democratic opponent; someone too far from the mainstream to pose a great threat to the President’s re-election hopes. Nixon got his preferred campaign rival in George McGovern. Will Trump get to run against his chosen rival Bernie Sanders?  2020 looks eerily familiar to 1972. And, as one might suggest, we’ve seen that movie before, and it does not end well.