Frank Palmeri is Professor of English and Cooper Fellow in the Humanities at the University of Miami (FL). He is the author of State of Nature, Stages of Society:
Enlightenment Conjectural History and Modern Social Discourse (Columbia University Press, 2016) 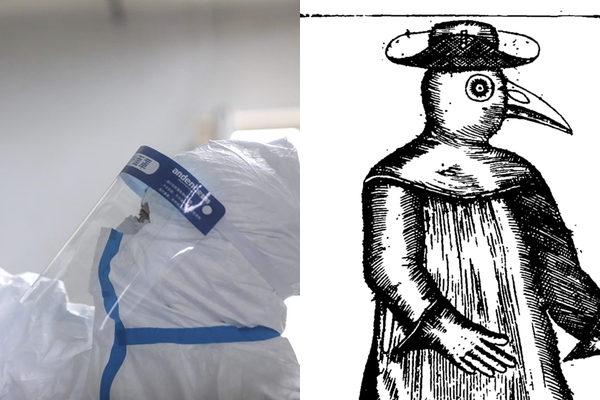 Almost three hundred years ago, in 1722, shortly after he published Robinson Crusoe, Daniel Defoe wrote a similarly fact-based fictional narrative—A Journal of the Plague Year—to warn of what to expect if the bubonic plague were to afflict England as it had with horrific effects in 1665. Reports reached London in 1720 and 1721 that the plague had already killed tens of thousands in Marseilles, and the laws for quarantining ships from foreign ports had been tightened. As it happened, England fortunately did not suffer from a visitation of the plague in the 1720s or indeed in later times. Nevertheless, Defoe’s Journal contains many elements that resonate with the circumstances surrounding the current Covid-19 epidemic—especially concerning the behavior of public officials, the persistent role of misinformation and rumor, and the psychological stress of living in a time of such anxiety.

Defoe was only 5 years old in 1665, but he had an uncle, Henry Foe (Daniel added the prefix “De-” to the family name when he was an adult), who may have been a model for the narrator of the Journal. Henry would have been in his mid-thirties at the time of the plague; the narrator says his family came from Northamptonshire, as the Foes did, and the book concludes with the initials “H.F.” as a signature. Defoe probably did not base his account on a journal by his uncle, but he may well have drawn on the memories and experiences of that uncle and other family members. We know that he also performed historical research, reading numerous books and pamphlets about the plague as he wrote the Journal. Some of what he wrote comes from his imagination, but his vividly imagined anecdotes, characters, and details could, he believed, bring out important truths about the experience of the plague.

Although I want to examine some echoes of the plague in the experience of the corona virus in the US, certain contrasts must be stressed. First, the plague was much more deadly and dramatic. From one-fifth to one quarter of the population of London died from the disease—upward of 100,000 people, proportionally the equivalent of more than 65,000,000 people in the US. The worst-case scenarios advanced so far anticipate that at the upper limit there might be 2.2 million deaths in this county before a vaccine or treatment is developed—a very high number, but a small percentage of what London and other cities of England suffered in the seventeenth century. Secondly, the plague caused a particularly gruesome kind of suffering and death. Those afflicted experienced painful swellings of the lymph glands (buboes), accompanied by high fever, severe chills and body aches, and frequently vomiting of blood and delirium.

One common factor between the two afflictions is that there was no treatment for the plague in 1665, just as there is none for the corona virus in spring 2020. But the most noteworthy parallels can be found in the social and political responses to each. Defoe’s H.F. reports, consistent with historical events, that as soon as the plague appeared in early June 1665, the king fled London and sought shelter with his court in rural Oxford, where he did nothing to help his subjects. After noting this abdication of his responsibilities, H.F. barely mentions the king again in the Journal.

Instead, in a continuing refrain, he gives credit to the Lord Mayor, aldermen and councilmen of London, their sheriffs, and other officers for remaining at their posts as they conscientiously and tirelessly managed the city’s response. They personally oversaw the distribution of supplies from the countryside that prevented food shortages; they maintained the system of justices of the peace that prosecuted criminals, including charlatans and frauds; they organized the system of enquirers and watchers to enforce quarantine orders for those with the disease; and they oversaw those who collected the bodies of the victims for burial. They issued orders that were clear and consistent, and they made themselves visible and available to hear complaints and requests from those who remained in the city. Because these local officers carried out their duties, London did not descend into chaos; however hellish the atmosphere, H.F. reports that there was never a time when the city could not bury its dead.

It is not difficult to see the parallel. As the king and his court proved themselves to be incompetent, cowardly, and callous, the Lord Mayor and his officers stepped into the vacuum and managed the response to the 1665 plague. Similarly, faced with the fecklessness, delusion, and inaction of the highest authorities in the federal government, many mayors, governors, and city councils have stepped up, taking difficult and effective measures to mitigate the effects of the Covid-19 pandemic.

Of course, it was the rich, like the royals and aristocrats, who were able to escape London; the poor who had to stay were afflicted most severely by the effects of the plague, including unemployment. They often had to take jobs as watchers of houses, nurses of the afflicted, or carters of the dead: H.F. reports that dozens of watchers were killed by residents breaking out of quarantines, and that carters fell down dead of the plague as they pulled their load toward the burial grounds. Although H.F. is usually sympathetic to the trials of the poor and of those who cared for the sick, at one point he takes a position similar to that put forward recently, that some of the vulnerable may need to die if economic activity is to be restored. H.F. suggests that it might have been fortunate that tens of thousands of the poor died at the height of the plague, because that way they did not need to be provided for and there was enough food for the rest of the population. However, he elsewhere states that in fact private citizens provided huge amounts for the financial support of the poor and that the city experienced no shortage of food during the plague. In fact, despite this one dismissal of mass deaths among the poor, H.F. seems to recognize that regular business activity cannot be re-established until the population recovers its physical health.

H.F. notes the numerous charlatans, quacks, frauds, fortune-tellers, and dreamers of false dreams who tried to sell the credulous unproven nostrums, hopeful astrological predictions, or useless practices. They join other purveyors of false claims, unrealistic optimism, misinformation, rumors, and unsubstantiated tales. Through H.F., Defoe takes pains to debunk exaggerations, and to express strong skepticism about tales of ghosts, supernatural signs, and divine interventions. In this way, H.F. acts not only as the writer of a journal but as a responsible journalist, attempting to report facts to the degree that he observed or can verify them. At least in this way, those who endured the plague were in a better situation than those going through the corona virus pandemic: although the king and his court fled the scene and abdicated responsibility, at least they did not actively spread disinformation and conspiracy theories or promote untested remedies and delusive hopes, as the leadership in the US has done since the beginning of the crisis.

Defoe’s work thus musters the resources of various genres—combining a journal or memoir with a journalistic report and a policy document. It cites from the official Bills of Mortality the number of the dead for many weeks from the most affected parishes (these reports resemble the current graphs showing the increases in the number of cases in various states and countries). On a policy matter, the Journal questions the value and practicability of the enforced quarantining ofwhole families once one member of the household is afflicted. In addition, it sounds a warning to the people of England to be prepared because they may face another infestation within the year. But it is also a work of history and of fiction. And paradoxically, its accomplishment as a work of history lies not so much in the accuracy of its numbers or facts as in its power as a work of fiction, in the observing eye and skeptical intelligence of H.F., and in the stories he tells, which convey through common language and the details of common life what it was like to live through the plague.

In the middle of his account, H.F. inserts a narrative of two brothers, a soldier and a sailor, who along with their friend a carpenter decide to leave the city after the plague has arrived. They are not wealthy, but through their skills, intelligence, and ingenuity, combining with others like themselves, they overcome the suspicion and opposition of those outside the city and establish a small, functioning, healthy community in the countryside until the plague passes. This self-contained short story is like a breath of clean air in the grim and claustrophobic narrative.

When the Journal ends, it is with a sense of a sudden lifting and relief. This too has passed, Defoe seems to say. In our own day, we need to be clear-eyed and sensible like H.F., not irresponsible or deluded like some leaders of his time and ours. The new virus presents a serious challenge, but it can be resisted and delayed, and it is not as deadly as the bubonic plague. Researchers will find a treatment and a vaccine, not tomorrow or next week, but eventually. Let us be mindful of our responsibilities to each other. This too shall pass.