The Cure May Be Deadlier Than the Disease. Much Deadlier.

Jonathan Rose is William R. Kenan Professor of History at Drew University. His books include Readers’ Liberation, The Literary Churchill: Author, Reader, Actor, and The Intellectual Life of the British Working Classes. 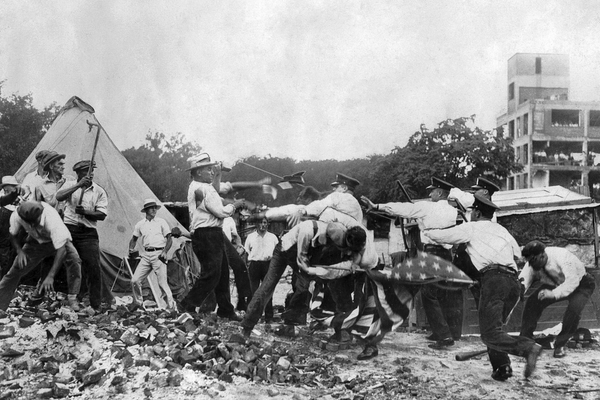 In the midst of the COVID-19 epidemic, we are being urged by governments and the media to “trust the experts” – that is, public health officials. It sounds straightforward and obvious, but historians are experts too. Of course our expertise is different, but what it tells us, and what we should communicate to the public, is that “trusting the experts” isn’t nearly as simple as it may seem.

By definition, experts know much more about a given subject than the rest of us: that’s their great strength. But experts can also suffer from tunnel vision: though they know  their own specialties, they may fail to look left or right and see the larger contexts, consequences, or costs of their actions. (One antidote to tunnel vision is a liberal education that introduces students to a broad range of disciplinary perspectives, but liberal education is now very much in retreat, as humanities enrollments plummet and vocational classes are filled to capacity.) The single-minded mission of a public health expert is to stop the spread of disease, which is of course an important priority. But if he is not trained in history or economics, he may not realize how relevant these bodies of knowledge are to the general health of society, and he may not appreciate the full costs of drastic public health measures.

The current measures against coronavirus are bringing our economy to a frightening halt. Following the crash of 1929, it took more than three years for the US economy to hit rock bottom: now we are on track to reach that nadir in a matter of weeks.  Never in history has an economic catastrophe descended so swiftly.  “The speed and magnitude of the labor market’s decline is unprecedented,” warned Constance Hunter, head economist at the accounting firm KPMG. “We didn’t see this in the global financial crisis. We didn’t see this in the Great Depression. There’s been a total decimation of consumption,” which, she concluded, would soon destroy 20 million jobs. That prediction was published on April 2: by April 16, 22 million Americans had filed unemployment claims.

Dartmouth economist David Blanchflower, a policymaker for the Bank of England during the 2008 crash, now calculates that unemployment will swiftly rise to 21 percent in the UK and 32 percent in the US. (The respective numbers during the Great Depression were 15.4 and 24.9 percent.) The World Trade Organization predicts that global trade may shrink by almost a third, roughly equivalent to the contraction of 1929-1932 but far more rapid. Even relatively short lockdowns could have disastrous consequences. Austria now plans to reopen most shops by May 2, but by then 30 percent of them will be out of business, according to Barbara Kolm, vice president of the Austrian National Bank. We tell ourselves that Prohibition was an intolerable infringement of personal freedom, though we only gave up the right to a Merlot with dinner. We now acquiesce to vastly more oppressive restrictions that are causing far more economic damage.

Bill Gates (who is no public health expert) and Dr. Anthony Fauci (who obviously is a public health expert, but neither a historian nor an economist) have brushed aside the prospect of another depression. Dr. Fauci dismisses the loss of 10 million jobs as merely “inconvenient”, and says “I just don’t understand” why all 50 states are not locking down their citizens -- perhaps because he does not understand how terrible the last depression was. Today it is surrounded by rosy memories: FDR reassuring the nation with his Fireside Chats, the WPA putting people back to work, and some terrific Hollywood movies. But we tend to overlook the darker side of the New Deal. To take just one example which isn’t much taught in our classes, the US government deported as many as 1.8 million Mexican-Americans to Mexico, though the majority were US citizens. The exact numbers are debated, but in any case they were far greater than the Japanese-Americans interned during the Second World War (120,000) or the American Indians removed from their land by Andrew Jackson (80,000). Begun under the Hoover administration, the deportations continued under Roosevelt, with the aim of saving jobs for Americans (as long as they weren’t Mexican-Americans).

Historically, economic prosperity tends to make human beings tolerant and peace-loving, whereas sharp economic reverses impel us to grab resources from others, persecute scapegoats, surrender to despots, and wage war. The economic turmoil that engulfed Italy after the First World War led directly to the triumph of fascism, an ideology that Benito Mussolini had invented just three years earlier. Under the New Economic Policy, Soviet Russia enjoyed a partial economic recovery and relative peace, but when industrial expansion stalled and food shortages developed in the cities, Stalin ruthlessly collectivized the land, killing millions in manmade famines. In the 1928 German election, the last one before the Depression struck, the Nazis won just 2.6 percent of the vote, far less than what the right-wing Alternative für Deutschland polls today; by 1933 Hitler had secured absolute power.

The Great Depression gave rise to tyranny, aggression, and mass murder throughout the world. Democracy was snuffed out in central and eastern Europe. Under severe economic stress, the Axis powers pursued a common solution: the brutal conquest of territory to establish self-sufficient economic spheres. Japan invaded China and Southeast Asia, Mussolini coveted North African colonies. As Adam Tooze has shown in The Wages of Destruction, Nazi leaders planned to carve out a vast empire in Eastern Europe and Russia, plundering resources and food supplies – and that, they calculated, would require the elimination of 30 million mouths to feed. Exterminating the Jews would get them only part way to that number, so they would also have to kill off millions of Poles, Russians, and Ukrainians. In fact the actual casualties of the Second World War were still greater: 70 to 85 million dead, two-thirds of them civilians, most if not all of them ultimately the result of the Great Depression. Without that trigger, there would have probably been no global war and no Holocaust (whom did the Nazis blame for the Depression?), and Hitler would have remained the obscure leader of a tiny fringe group.

M. Harvey Brenner – a public health expert who was also trained in history, economics, and sociology – recognized that even mild recessions can kill. Drawing on American health statistics from 1940 to 1973, he calculated that a one percent rise in unemployment over six years produced 36,887 excess deaths, mainly from cardiovascular disease, suicide, homicide, and cirrhosis. His projections were confirmed by separate studies of Britain, Japan, Australia, and New Zealand. Extrapolating from Brenner’s estimates, political scientist Toby Rogers calculates that even a 5 percent increase in unemployment over 5 years (the Great Depression lasted more than a decade) would kill nearly 300,000 Americans. If unemployment reaches 20 percent, as some economists are predicting, the result would be almost a million deaths in the United States alone, far more than any plausible estimate of COVID casualties. But whereas COVID deaths are highly publicized, these “deaths of despair” would be invisible: the coroners’ certificates would identify the causes as heart disease, murder, suicide, and so on, not economic collapse.

If you question whether the measures taken against coronavirus today will kill democracy, the answer is that they are already killing democracy.  Recently Viktor Orban, the Hungarian prime minister, used the crisis to win emergency powers to rule by degree, send parliament home, cancel elections, and jail individuals for up to five years for spreading “fake news” (which might, of course, be interpreted to mean criticizing Viktor Orban). Similar arbitrary powers have been granted to President Rodrigo Duterte of the Philippines, Bolivia has postponed elections, Thailand has cracked down on journalists critical of the government, lockdowns everywhere effectively ban protest demonstrations, and even the Western democracies are creating intrusive surveillance machinery. In Britain, the home of Magna Carta and George Orwell, neighbors are reporting neighbors to the police for jogging and hiking, which violate lockdown restrictions.

In Africa, government security forces have been brutalizing and in some cases killing citizens to enforce lockdowns. Throughout the Third World there are hundreds of millions living on a subsistence level, and for them lockdowns can mean starvation: they cannot stop working or work from home. Oxfam International estimates that more than 500,000,000 people worldwide could be submerged below the poverty line. “I would rather risk being beaten by policemen,” says a Kampala taxi driver, “I can’t stay home and just watch my hungry children crying.” The Institute for Security Studies in South Africa has warned that “the risks posed by continued, illegitimate state violence…could be as great as those brought by the pandemic.” You may argue that these are temporary measures justified by a health emergency, but history suggests that “emergency” restrictions have a way of becoming permanent.

Even in the United States, we have accepted repressive measures which in many ways go farther than any totalitarian regime in history: the closure of schools, universities, theaters, libraries, restaurants, workplaces, churches, parks, all public meetings, and all “nonessential” businesses. In my state of New Jersey, public parks are closed but liquor stores have been deemed “essential”, though we know that alcohol abuse reduces resistance to disease and is a major cause of domestic violence – and indeed, from around the world, reports of domestic violence are surging under the pressure of lockdowns.

Experts are also prone to rigidity and groupthink. After all, if they change their minds, or if they publicly disagree with each other, they make plain that they are not infallible. Lockdowns now look increasingly like an epidemiological Maginot Line, a flatfooted static defense that rules out more aggressive and innovative tactics. Doctors fighting the virus in the trenches report that they are using unconventional treatments such as hydroxychloroquine with some success. Anthony Fauci is skeptical, noting that the effectiveness of these drugs has not been proven. Granted, but the effectiveness and safety of extended lockdowns, which Dr. Fauci promotes, have not been proven by the same standards of evidence that he applies to antivirals. What we do know for certain is that hydroxychloroquine is reasonably safe and very inexpensive; it won’t wreck the economy or place most Americans under house arrest .

Of course every serious medical treatment should be administered with the informed consent of the patient and supervised by a physician who monitors possible side-effects and carefully avoids overdosing. But lockdowns are being imposed by panicky, dictatorial politicians in extreme dosages that may well prove fatal to the global economy.

Given the enormous potential damage, we may want to consider as an alternative the far less restrictive policies of Sweden. There compliance with social distancing is mostly voluntary. Many schools and restaurants remain open. Some Swedes work at home, but others continue to report to their workplaces. The streets of Stockholm are less crowded, but certainly not as desolate as New York City. In short, life goes on in a free country.  The Swedes will no doubt suffer a few more COVID deaths than their neighbors, at least in the short run. But if we transform our society into an impoverished prison, we will pay an incalculable price in the not very long run.