John Howard is Emeritus Professor of Arts and Humanities, King’s College London. He is the author of Men Like That: A Southern Queer History, editor of Carryin’ On in the Lesbian and Gay South, and executive producer of The Joneses. 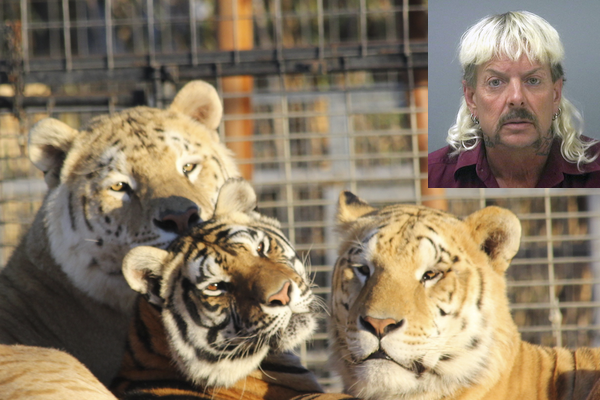 With nifty alliteration, hit docuseries Tiger King delivers on its promise of murder, mayhem and madness. With triple entendre, The Guardian suggests hunting, meth and big cats set Joe apart from the “anodyne” metrosexual throwbacks of Will & Grace. Doubtless, something should be learned from an out-and-proud male trouple [a romantic triad--ed.] in Oklahoma. However, my quarter-century of scholarship in Southern LGBT history suggests the analytic triads most germane to the topic might be poverty, disability, and discrimination, as they intersect with race, religion, and rural space. Less sexy, to be sure. But potentially more enlightening. Watch again, as Netflix urges, and you’ll figure out the unique challenges of queer life in the countryside.

With staggering reach—dubbed into French, German, Italian, Portuguese, Spanish (both Castilian and “Latin American”), Turkish, and more—Joe Exotic regularly appears among the top five Wikipedia searches. So, can Tiger King complicate traditional notions of queerness in the Bible Belt? Maybe. But armed gays should come as no surprise in the context of American gun culture, stoked by weapons manufacturers and the NRA. Around the world LGBTI people face greatly increased risks of bullying, intimidation, assault and murder, necessitating self-defence. Down South and out West, gun ownership is a widely accepted method, if a highly flawed one, as demonstrated in the series’ harrowing fifth instalment.

Below the Mason-Dixon line, is Joe’s loud-and-proud bravado unusual? Without question. Whereas Joe financially can afford to fly the rainbow flag, most LGBTI Southerners are more discreet for fear of job discrimination: loss of livelihood, if not loss of life. They pursue the path of quiet accommodation, as John Marszalek’s bold new study confirms. So-called right-to-work laws in the South are in fact union-busting, right-to-fire-without-cause laws. By no means a model employer, Joe exploits this dynamic, recruiting desperate ex-cons and a trans veteran of color to his deadly dangerous workplace.

Over seven episodes, how many on-the-job accidents can you count? By contrast, how often do we hear the phrase “workers compensation”? Why don’t we learn more about double amputee John’s elliptical zip-line accident? Why is war vet Saff encouraged to self-blame after another horrific mishap at work? Why at series’s end does he still lack a prosthesis? National healthcare, anyone? Occupational safety?

Into his polyamorous home life, Joe invites young men who have sex with men (MSM) but do not identify as gay. The series gives us rare glimpses into the lives of two such men—who unfortunately are caricatured as toothless tattooed John (Baby Doll meets Deliverance) and wayward pothead Travis (Midnight Cowboy meets Ridgemont High). Instead, their difficult decision-making processes should be understood in light of pernicious Southern poverty rates, which reach unconscionable levels in rural Oklahoma. Suffice to say, when an aspiring Presidential-cum-gubernatorial candidate is both your husband and your boss, things get complicated.

Precisely because antigay job bias is rampant—in hiring, training, promoting, and firing—down-low (DL) cultures are widespread in the South. Queer activists identified the problem long ago, with giant Southern chains like Cracker Barrel flip-flopping on commitments to end discrimination over the years. Principled civil rights leaders like Rep. John Lewis of Georgia have recognized the issue since at least the mid-seventies. But in a grim annual ritual, Congress repeatedly rejects ENDA—the Employment Non-Discrimination Act, even though a majority of Americans support it, as do a slight majority of Southerners. (Of greater significance to producers is the Big Cat Safety Act, which—the final titles note—“has not passed.”)

Until 2003, consensual homosexual relations were criminalized across the South, giving legal sanction to other forms of anti-LGBTI discrimination, from which we’ve yet to recover. Bias persists in public accommodations and particularly housing, for both young and old. Really, who would choose to live in one of Joe’s trailers? Given his iniquitous pay scale, wouldn’t you too rummage through expired packaged meats?

Since working-class queer Southerners like Joe’s team seem trapped—with long shifts, few options, and limited mobility—solutions might be found not in a major metropolis, but rather just up the road. As Michael Bibler shows in his insightful analysis of podcast S-Town, small Southern towns can be “deceptively portray[ed] as excessively rural and remote[,] perpetuating a longstanding stereotype of the whole South as generally disconnected from the modern world, culturally and geographically.” Just as Woodstock, Alabama, is within quick reach of thriving queer communities in Tuscaloosa and Birmingham, so too is Wynnewood an easy drive from Norman and Oklahoma City, which hosts LGBT 12-step meetings three times a day.

If Joe Exotic has overtaken John B. McLemore as “the most recognized queer person from the South in our time,” let’s look beyond his dubious example to better forms of queer kinship and affiliation. Where Southern queer cultures remain gay-male dominated, useful historical antecedents can be found among the lesbian literary cultures, bookstore habitués, and political figures so well assessed by Jaime Harker in The Lesbian South. Where Southern LGBTI communities remain white dominated, the strategies of resourceful African American forerunners can be compared across E. Patrick Johnson’s powerful volumes Sweet Tea andHoneypot. When queer histories get stuck in big cities such as Atlanta, Dallas, and Houston, broader terrain can be explored in Colin R. Johnson’s brilliant Just Queer Folks. When lengthy series such as S-Town and Tiger King somehow fail to grasp the continuing importance of Protestant Christianity in the lives of most LGBTI Southerners, the worship rituals and queer customs of The Joneses might be consulted.

Given capitalist fast economies from fashion to streaming, much cultural energy currently is expended upon casting a potential adaptation: Rob Lowe as Joe? Matthew McConaughey as zoo manager John? Billy Bob Thornton as reality director Rick? Instead, I would urge producers to reflect carefully upon Joe Exotic’s destructive legacy and to envision future changes they could facilitate.

Mindful of the hardships Joe’s employees endured, any new series should seek to forge alliances with union locals and churches, disability campaigners and trans activists, communities of color and economic empowerment initiatives, especially among Chickasaws and Choctaws. Not only should national associations such as GLAAD and PETA be consulted, but also regional LGBTI organizers in south Oklahoma and north Texas, along with Joe’s current husband Dillon.

As for us languid lockdown spectators of these latest Southern grotesques, we might best join forces with any of these agencies to become better-informed advocates for economic justice across the queer South and beyond.