"Western Civ" Was Not a Late Invention

Stanley Kurtz is a senior fellow at the Ethics and Public Policy Center in Washington DC. He holds a doctorate in social anthropology from Harvard University. For the past two decades he has published on a wide range of policy issues at venues including The Washington Post, The Wall Street Journal, National Review, The Weekly Standard, The Claremont Review of Books, and Policy Review. Mr. Kurtz has a special interest in issues pertaining to K-12 and higher education. His latest book, The Lost History of Western Civilization, has been published by the National Association of Scholars and is accessible as a free .pdf here. 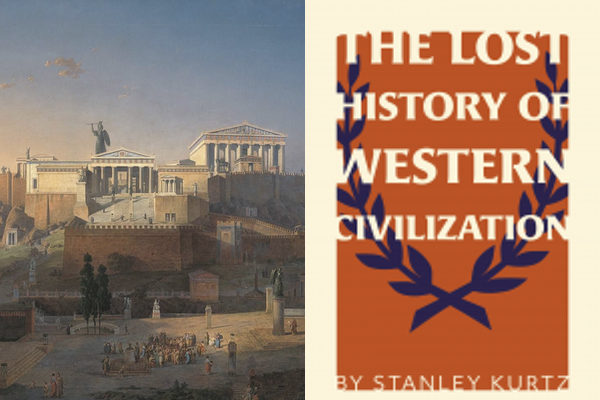 The claim that “Western civilization” as a concept and a course of study was invented during World War I is mistaken. That claim has been in heavy circulation among academic historians for nearly four decades, and has often been used as a culture war weapon against those who uphold traditionalist views of the West’s cultural continuity. First offered in 1982 by University of New Brunswick historian Gilbert Allardyce, this model specimen of historical deconstruction was widely cited amidst national controversy in 1987-88 by scholars who favored replacing Stanford’s Western Culture requirement with a multicultural alternative. Allardyce later helped found what he dubbed the “world history movement,” and his take-down of Western Civ is invoked by historians generally, and partisans of world history in particular, to this day.

Allardyce’s deconstruction of Western Civ was further developed by historian Lawrence Levine in his 1996 brief for multiculturalism, The Opening of the American Mind. As Levine put it, “The Western Civ curriculum, portrayed by conservative critics of the university in our time as apolitical and of extremely long duration, was in fact neither. It was a 20th century phenomenon which had its origins in a wartime government initiative, and its heyday lasted scarcely fifty years.”

Yet the Allardyce-Levine thesis is false, and dramatically so. Under only slightly different names, Western Civ has been taught since colonial times, appealing across the political spectrum until the late 1960s. While it takes a bit of digging to rebut Allardyce and Levine, any historian even moderately skeptical of their thesis could have exposed its gaping holes long ago. That nothing of the sort has happened suggests that contemporary historians’ hostility to America’s “dominant narrative” has hamstrung the discipline’s ability to self-correct. I lay out a refutation of the Allardyce-Levine thesis and explore the weaknesses of history’s post-1960s disciplinary orthodoxies in The Lost History of Western Civilization, a book-length report for the National Association of Scholars, a portion of which is summarized here.

Montesquieu offered the first systematic comparative study of world civilizations in The Spirit of the Laws. Singling out liberty as Europe’s unique civilizational marker, Montesquieu explained it by referencing the character of Christianity, the social effects of commerce, the relative separation of religion and state, and the rule of law. In short, Montesquieu developed the core themes of a 20th century Western Civilization course in 1748. His notion of a “spirit” informing a given society’s laws came close to what we mean today by “civilization.” Indeed, a French disciple of Montesquieu’s coined that term in 1757. Montesquieu’s conviction that Europe’s uniquely dispersed and conflicting power-centers explain its penchant for liberty was later taken up by the civilizational histories that shaped American higher education through the 18th and 19th centuries, histories ignored by Allardyce and Levine.

One of these was Adam Ferguson’s 1767 Essay on the History of Civil Society, the first known English-language publication to use the word “civilization.” Even more influential than Ferguson’s Essay was another product of the Scottish Enlightenment, William Robertson’s 1769 History of the Reign of the Emperor Charles V. The book-length introduction to that work, A View of the Progress of Society in Europe, from the subversion of the Roman Empire to the beginning of the sixteenth century, gained fame in its day as the first great narrative account of the development of European civilization. Robertson’s View of the Progress of Society in Europe was a sensation in America on the eve of the Revolution, popular with Patriots and Tories alike.

Levine points to the absence of “modern” (i.e. post-ancient) history in the early American curriculum, yet this misses the significance of the “informal curriculum.” In colonial times, Harvard and Princeton were modest provincial institutions, unable to afford the specialized faculty increasingly common in England and Scotland. The solution was to make the latest specialized scholarly works available at the library, then develop lists of books approved for student use. Robertson, Montesquieu, and Ferguson were all on Harvard’s “common use” list of 1773, and were very heavily borrowed in the years leading up to the Revolution. In fact, Robertson’s Charles V was the library book most widely borrowed by Harvard students from 1773-1776. It appears that on the eve of the Revolution, Harvard students were studying Western Civ. In fact, it seems to have been the most popular subject.

Levine claims that, given their fears of foreign cultural influence, John Adams and Thomas Jefferson would have frowned on the study of America’s European civilizational roots. Yet Adams’ was one of Robertson’s great advocates, while Jefferson put Charles V—along with plenty of other post-ancient European history—on the curriculum of his newly-founded University of Virginia in 1825. By 1783, Montesquieu had been incorporated into Harvard’s formal curriculum, as was Robertson View of the Progress of Society in Europe by the early 19th century.

Yet it was Francois Guizot’s 1828 lecture series, The History of Civilization in Europe that was to become the most widely-used college history textbook of the 19th century, its popularity in America running from about 1839 through 1890. Like Robertson, Guizot followed Montesquieu in arguing that Europe’s tradition of liberty grew out of the unresolved clash between its diverse power centers. Guizot’s thesis had a formative influence on Tocqueville, Mill, and Marx, the leading political thinkers of the era.  In contrast to Allardyce and Levine, scholars who actually lived through the mid-20th century efflorescence of Western Civ courses saw them not as unprecedented innovations, but as a return to civilizational themes explored during the era of Guizot.

Even during the heyday of the “elective revolution” (1870-1916), prior to the rise of “general education”—of which Western Civ was the leading edge—de facto Western Civilization courses emerged to ease the transition from the older mandatory curriculum. Allardyce massages the historical record to disguise this fact.

Instead of seeking out pre-20th century equivalents of Western civilization, like “the spirit of Europe’s laws” or “European civilization,” deconstructionist historians preferred to seize on a minor linguistic innovation in hopes of exposing the West as an “invented tradition.” This method led Allardyce and Levine to err, suggesting that the preference of contemporary historians for deconstructive disruption has become at least as much of a blinding orthodoxy as earlier historians’ bias toward continuity.

Pitzer College anthropologist Daniel Segal did offer a modest corrective in 2000, pointing out, contra Allardyce that Columbia University’s 1919 “War Issues Course” was not in fact “a sweeping survey of the West’s civilizational lineage.” Yet Segal took this as an argument for moving the date of Western civilization’s supposed invention further forward to the 1920s and 1930s.

The truth is that traditionalist critics of the post-1960s university have been right all along. The Allardyce-Levine thesis itself is an invention. America’s colleges taught Western civilization for centuries before the curricular disruptions of the 1960s, and the topic’s appeal was trans-partisan. That Allardyce and Levine could have prevailed uncorrected for decades when ample evidence to refute them was ready to hand should prompt reflection on the disciplinary orthodoxies of our day.