James D. Zirin is a former Assistant U.S. Attorney for the Southern District of New York and an author, most recently of Plaintiff in Chief: A Portrait of Trump in 3,500 Lawsuits (All Points Books). 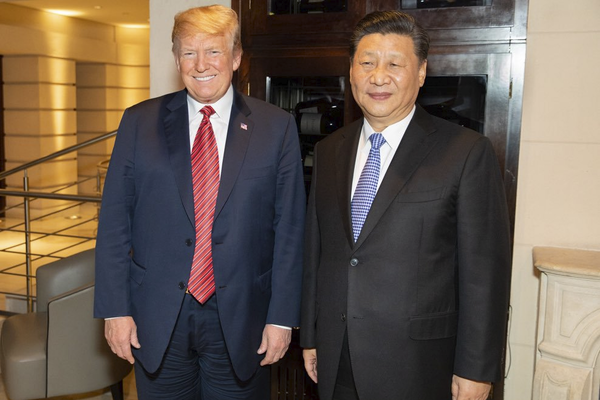 Trump has now officially blamed China for the coronavirus. This should not be surprising. Trump’s business and political history has been riddled with xenophobia—a pathological fear or hatred of foreigners. This is nothing new. He has historically used paranoid fear of foreigners to obtain business or political advantage.

In 1993, he appeared on the Don Imus radio show. Asked what he thought about an Indian tribe’s plans to open a casino in New Jersey that would compete with his Atlantic City casino business, he thundered: “A lot of these reservations are being, in some people’s opinion, at least to a certain extent, run by organized crime elements. There’s no protection. There’s no anything. And it’s become a joke.”

Imus mentioned the Mashantucket Pequot Tribal Nation, which had opened the successful Foxwoods Resorts Casino in Mashantucket, Connecticut, in 1991. “I think if you’ve ever been there,” said Trump, “you would truly say that these are not Indians. One of them was telling me his name is Chief Running Water Sitting Bull, and I said, ‘That’s a long name.’ He said, ‘Well, just call me Ricky Sanders.’” The tribe termed Trump’s comments disrespectful and racist, and filed a complaint against him.

Later in 1993, Trump would testify before Congress that organized crime “is rampant—I don’t mean a little bit—is rampant on Indian reservations.” Later in 1993, he delivered the offensive line he would repeat on television again and again. He said that the Mashantucket Pequots did not look like real native Americans. “They don’t look like Indians to me,” he testified. “They don’t look like Indians to Indians.” Trump’s remarks about organized crime among the Indians of course had no foundation.

Coming down the escalator of Trump Tower in June 2015 to kick off his presidential candidacy, he complained that Mexicans were not “sending us their best people.” He did not claim the Mexicans were diseased, but rather that they were criminals. “They’re bringing drugs. They’re bringing crime. They’re rapists.” The speech on the escalator was the harbinger of “truth decay” in our political discourse. By “truth decay,” I mean the willingness smear  any person or any group or to lie about any any event, to obtain political advantage.

Before the virus hit, Trump’s re-election seemed assured. He had the better part of the economic argument with unemployment at its lowest for half a century, the stock market soaring to record highs, the economy at a boil, and his probable opponent a self-avowed Socialist. Then, the ground shifted pretty quickly, which is what is so fascinating about politics. Biden became the opponent. Tough to call him Socialist.  More than 1.6 million Americans have now been infected with coronavirus, nearly 95,000 have died, and more than 38.6 million people in the last nine weeks were part of a new wave of unemployment—the highest levels since the Great Depression. Trump had to quickly resurrect a campaign that was on a ventilator. The solution, the darling of his nursery: xenophobia.

Trump is a day trader. In March, Trump called Covid-19 the “Chinese virus,” because he saw political advantage in it. Then, he  dialed it back, praising Xi Jin Ping for his handling of the pandemic. Most recently, he claimed he had evidence for the unsubstantiated theory that the virus arose out of a lab accident in China. Secretary of State Pompeo claims there is “enormous evidence” supporting the lab accident theory.

Trump’s virus policy has become xenophobic without even the virtue of consistency. It is about short-term politics, not policy. In a late-night tweet, he said that he would “temporarily suspend immigration into America,” a variant of “last one in, close the door.” With Trump, there is often space between the cup and the lip. His executive order that followed was full of loopholes possibly  reflecting concerns of the business community about the obviously essential nature of immigrant labor to the economy. Trump clearly plans to feature in his presidential campaign the falsity that China is responsible for the virus to deflect attention from his mismanagement of the problem as “Doctor in Chief,” painting “Beijing Biden” as soft on China where he has been the true hardliner.

Strange that we identify diseases with foreigners. Hurricanes and typhoons are named after men and women in alphabetical order, not after the country where the storm system arose. Famines in history have been largely unnamed even though two of the most egregious famines of the 20th century were the products of man’s inhumanity to man, the Nazis’ starvation of the Warsaw ghetto, and their 900-day blockade of St. Petersburg.

Trump knows that xenophobia plays well with his political base. Throughout history people have conflated foreigners and disease. In the modern world, there is a kernel of truth to the idea. “International mobility is central to the globalization of infectious and chronic diseases,” reported the World Health Organization in 2007. Pandemics and globalization go together like a horse and carriage with foreign policy waiting in the wings. No one doubts that international travel can spread disease, but why must it be assumed that it is “foreigners” infecting us, and not home-grown Americans returning from abroad?

When the Bubonic Plague infected Europe in the mid 1300s, there was no CDC or FDA. There was no science to test the population or to race for a cure. There was no Dr. Fauci to recommend quarantining the population either. But there was plenty of fear and hatred of foreigners to go around, just as there is today. The society at the time blamed foreigners, beggars, lepers, gypsies and Jews for the 200 million who died in the scourge.

Blame went so far as to stigmatize peoples identified with the origin of pandemics. And those stigmatized were invariably others, foreigners, ethnics, them, people not like us.

And so, syphilis was called the “French disease.” The first written records of an outbreak occurred in 15th century Naples, following a French invasion during the Italian War of 1494-98. But the sting of the stigma was that syphilis implicated sexual promiscuity for which the French were (and are still are) supposedly notorious.

People blamed the Yellow Fever epidemic of 1793, which decimated Philadelphia, on immigrants arriving on ships. It took only two months for the epidemic to kill 5,000 of the city’s 21,000 inhabitants. According to publisher Matthew Carey, Philadelphians practiced social distancing, and refused to shake hands with their neighbors. A century later, scientists established that the infection was spread not by immigrants but by mosquito bites.

There followed the Cholera pandemic of 1832, blamed on unsanitary conditions in Asia, the “Russian” flu of 1889; the “Spanish” flu of 1918 (the first recorded cases of which were ironically in Kansas), which killed 675,000 Americans, and even infected President Wilson (he survived); the “Asian flu” of 1957; the Hong Kong flu of 1968; the “West Nile” virus discovered in Uganda in 1937; the Ebola virus of 1976 (named for a river in the Congo; it was to have been named the Yambuku virus after the village where it first surfaced, but scientists named it after the nearby river to avoid stigmatizing the village); and now the “Wuhan virus,” the pejorative coined by our Secretary of State, who is commissioned with promoting stable relations with foreign countries.

Trump has become the inflection point of our national anxieties, which is exactly what he wants. No one wants to die of this deadly virus, and the president, along with the governors and mayors should keep the public fully informed with honest answers, not political tropes.

But blaming China and threatening reprisals is not going to save any lives. It won’t open up the country any sooner. It won’t create a single job. But it might just get Trump re-elected. Despite a 45% approval rating. At least he thinks so, and that’s what our politics is sadly all about.