George Washington Would Have So Worn a Mask

George Washington Would Have So Worn a Mask 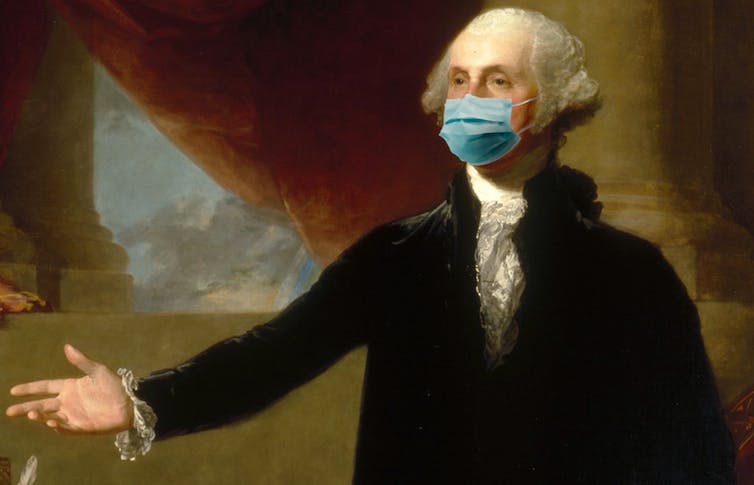 The genre “What would X do?” – where X stands for a noted figure in history, say Jesus or Dolly Parton – is silly. And yet, as a scholar writing a new biography of George Washington, I can’t help making a bold declaration: The Father of His Country would wear his mask in public.

Face masks have become something of a political statement in the U.S. They are seen by some as a line in the sand between “effeminate” Democrats and “masculine” Republicans.

Opponents see them as a symbol of tyranny. More than a few men have a problem with wearing masks. To them, these face coverings are for the weak and sick and communicate insecurity.

Pundits on the right claim that George Washington would have also refused to wear his mask, and that such a decision would be the correct one.

Public perceptions matter, of course. Those of a no-leader-should-wear-a-mask mentality argue that presidents should display strength – a masculine, slightly defiant, unapologetic type of strength. And no president could effectively do that behind a mask, of course.

The argument is predicated upon a precise image of what a “real” man and, even more, a “real” president should be: unapologetically masculine. And isn’t that what Washington was?

Famous descriptions of the man conjure him as full of braggadocio, a challenger. He would toss stones, or silver dollars, across the Rappahannock River and over the Natural Bridge; he would cast iron bars at great distances just for the sake of outdoing lesser males; and he would humiliate any wrestler who dared to confront him.

But, guess what, those myths were crafted during the 19th century, when ideals about “real” men had changed dramatically.

Portraits of Washington as a reckless “he-man” were the outcome of the long aftermath of the War of 1812. A new rampant nationalism and its corresponding rampant masculinity infused the Jacksonian era, carried over into the expansionist agenda of the Polk administration, and fueled the territorial ambitions behind the Mexican War.

The real Washington was different.

To begin with, his daily life was already enmeshed in brutality. He had managed to survive two vicious wars. He had fought and killed other men, up close. He had experienced adventures and misadventures that are hard for anyone today to imagine. He would never forget what he saw, “the dead, the dying, the groans, lamentations, and cries along the Road of the wounded for help.”

These scenes “were enough to pierce a heart of adamant.”

Throughout it all he continued to profit from the violent institution of slavery. Washington didn’t feel he had to prove anything. He was not a stand-up macho. 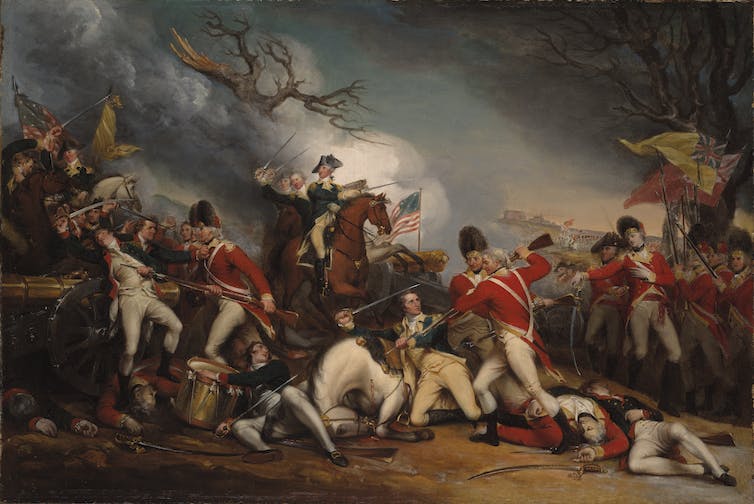 Washington – top center, on horse – didn’t feel he had to prove anything, including his courage or manliness. Wikipedia, John Trumbull, painter

A self-aware man, Washington tried his best to step out of this world of violence.

A leader with an exquisite sense of theater, he always presented himself as respectful of civic customs. He was happy to be a team player and he made sure everyone grasped the message, that his ideal world was the one in which civilization would prevail.

Washington didn’t like gratuitous exhibitions of strength and was not driven by testosterone. His daring actions at the crucial Battle of Princeton in 1777, for example, were carefully planned, with all pros and cons considered. At the time, he was wearing something more burdensome than a mask: the responsibility of being the commander in chief of the rebellious 13 colonies.

During an exceptionally harsh moment, he chose a spectacular way to lead his men by example. At one point, he was only about 30 yards from the British line. The enemy’s muskets could have easily got him. He was heard to say to his troops, “Parade with me my fine fellows, we will have them soon!”

But that was war. Washington’s tenet was that no real man should ever put up shows of strength, risk his life wantonly or, worse, put people’s lives in jeopardy.

When a young Marquis de Lafayette, the fervent supporter of American independence, arrived in America to join the revolutionary forces, he brashly challenged a leading British representative in the colonies to a duel.

Washington, predictably, reacted with irony and taught him a lesson about manliness in America.

“The generous Spirit of Chivalry,” he pointed out, was no evidence of manhood, let alone of leadership. It didn’t project strength. It was simply outdated, ludicrous and dangerous. “I would not therefore have your life, by the remotest possibility, exposed, when it may be reserved for so many greater occasions.” 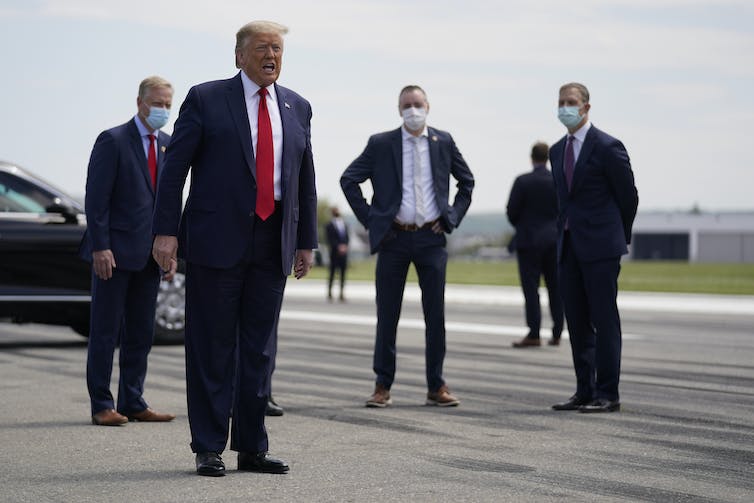 On May 14, 2020, while those around him wore masks, President Donald Trump did not. AP Photo/Evan Vucci

The 18th century was an age of paradoxes, for sure, but also of high republican standards and even higher humanitarian goals.

Males themselves embraced high ideals. A humble, self-effacing, forgiving, cooperative, magnanimous, benevolent and “feminine” man would have been immediately deciphered as both successful and strong, back then. Especially a public leader. Especially a president.

Those who wear masks project strength. They show self-awareness, self-control, patience, perseverance and many other Washingtonian virtues.

[You need to understand the coronavirus pandemic, and we can help. Read The Conversation’s newsletter.]