Of Steamboats and Fireworks: The Great Mississippi River Race of 1870

Dr. Eric Simanek is the Robert A. Welch Chair of Chemistry at Texas Christian University in Fort Worth, Texas where he teaches a course on the science and history of whiskey. 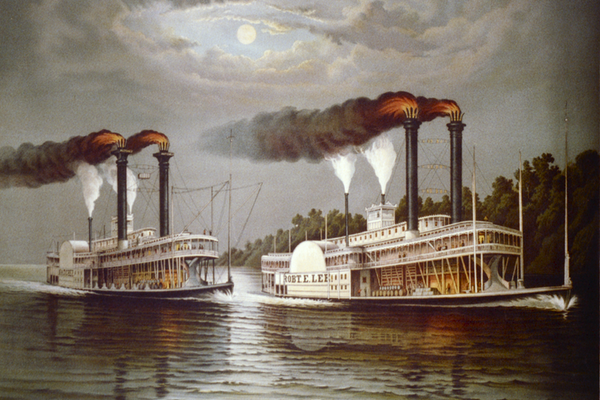 The 4th of July of 2020 will be different than those of the past. Masks will be worn. Distances will be kept. Crowds will be smaller. Hand sanitizer will be shared in abundance. The situation will likely lead to nostalgia and a desire for some form of distraction. An event that occurred exactly 150 years ago to the day stands out and could serve this purpose.

On the 4th of July of 1870, a 1,200 mile race between two steamboats on the Mississippi River was decided. The race attracted global interest. Reporters wrote about it. Gamblers wagered on it. People gathered and cheered for it. Currier & Ives immortalized it.

The race tested both man and machine. The captains were considered the best on the river. They also enjoyed a long-standing feud. Captain Tom Leathers of the Natchez knew the river well. The trip from New Orleans to St. Louis was his run. Captain John Cannon of the Robert E. Lee ran from New Orleans to Louisville. The stretch of the Mississippi River north of its confluence with the Ohio was unknown to him.

The two steamboats were of similar dimensions and build—long and narrow. Either would stretch from goal line to goal line on a football field, but at less than 50 feet in width, at least four steamboats would be required to cover the entire playing surface.

Each steamboat had four decks, and were of similar design. Cargo and engine works lay closest to the water. The tiny pilot house was perched on the top. The passenger suites and salons were on the second deck. The smaller crew quarters comprised the third deck. A pair of smokestacks on each stretched upwards of 100 feet into the air belching black smoke and embers. Each had two paddle wheels set about 3/4 of the way back from the bow and stood four stories high.

The Natchez was newer and was engineered for speed. The Robert E. Lee was akin to a floating luxury hotel. It would seem logical that the Natchez should win with both design and experience on its side.

Still, the Robert E. Lee arrived in St. Louis first. A crowd of 75,000 people was waiting. Its trip upriver was a record-setting 3 days, 18 hours and 14 minutes. The Natchez crossed the finish line 6 hours later.

While the gap seems substantial, the Robert E. Lee did not catapult ahead until the vessels were within 200 miles of St. Louis. Indeed, they were about 30 minutes apart when a heavy fog fell onto the river. Thirty minutes was nothing when one considered the delays that were imposed by the mechanical failures—which happened with regularity—and the likelihood that the vessels would get caught on the shifting sandbars of the river.

The Robert E. Lee continued slowly and cleared the fog in the early hours of July 4th. In contrast, Captain Leathers ordered the Natchez to be tied up until the fog cleared. He probably assumed Captain Cannon had ordered the same. By the time the fog cleared 6 hours later, the race was all but over.

There would be no rematch. The heyday of steamboats was drawing to a close as the network of railroads criss-crossed the country. One coal-fired, steam-powered engineering marvel gave way to another.

Jack Rudolph offers a compelling play-by-play of the events in an article entitled “Going for the Horns” which appeared in American Heritage in 1980. The account makes for an excellent story for those stretched out on blankets awaiting the arrival of darkness and looking for some distraction on the 150th anniversary of this great race.