Marika Plater is a PhD candidate at Rutgers University who studies the history of parks in New York City. 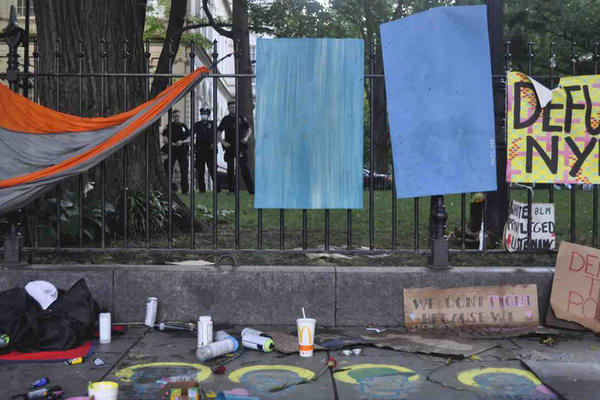 The gates to the park that surrounds New York’s City Hall are locked. Visible through the iron bars are the colors green, from the lush vegetation, and blue, from the uniforms of the New York Police Department. Officers look out at crowds of protesters demonstrating and camping with colorful umbrellas to protect them from rain and sun, an array of rainbow-hued signs and banners, and portraits of George Floyd and Breonna Taylor. Activists have created this “Abolition Plaza” or “Abolition Park,” formerly “Occupy City Hall,” to demand divestment from policing and reinvestment in services for communities. The history of parks and protests in nineteenth-century New York reveals why this powerful action is unfolding outside the gates of City Hall Park, rather than within.

This spot has been a center of political expression since before there was a park, a City Hall, or even a United States of America. Likely the site of a Lenape village before European colonizers arrived in the seventeenth century, this land became “the Common” or “the Fields” for residents of the Dutch and then English settlement at the island’s tip. Aside from grazing animals, foraging for building materials and fuel, and celebrating holidays there, people also used this shared land on the outskirts of town as a place of protest. During the Revolution, the Sons of Liberty called the Common “the most publick place.” It was there that these rebels protested against the Stamp Act by hanging an effigy of the Loyalist mayor, erected Liberty Poles, and sparred with British soldiers who cut the poles down. Alexander Hamilton gave his first speech at the Common and in 1776, revolutionaries read the Declaration of Independence there. 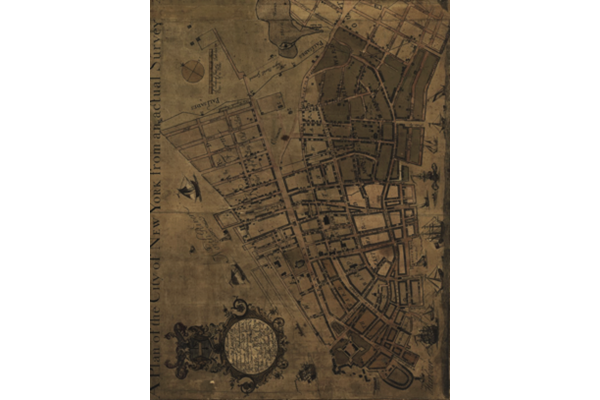 Francis W. Maerschalck and G Duyckinck,“A plan of the city of New York from an actual survey,”

When the Common became a park in the late nineteenth century, the future of this site of political expression was uncertain. The elite New Yorkers who drove the process of creating the park envisioned a natural landscape for quiet leisure, not activism. When unemployed seamen planned a rally in the park to demand government aid in 1808, the mayor circulated handbills announcing that he “decidedly disapproves” of this action. But New Yorkers refused to stop protesting there, especially after City Hall was completed in 1812 and demonstrations were sure to catch the attention of municipal leaders. The strong iron fence built around the park between 1818 and 1821, though, signaled that protesters could not expect to come and go as freely as they once had.

Still, when historian Henry B. Dawson reflected in 1855 on the Common’s role in the Revolution, he insisted “the Park [at City Hall] is still the refuge of the people when their own, their party’s, or their country’s grievances demand a hearing. Here they freely assemble and discuss their rights and their wrongs.” A spectrum of activists demonstrated in the Park, expressing a range of views that sometimes clashed, and made this spot the political center of a diverse and divided populace.

The Park at City Hall was an especially important political space for Black New Yorkers. Few could vote, thanks to explicitly racist restrictions on suffrage that passed at the same time as all white men gained access to the ballot in 1821. Protests in the park forced authorities, who were likely to overlook the concerns of the Black community, to listen. The most frequent demonstrations mobilized against kidnappers who captured Black people on the city’s streets and attempted to enslave or re-enslave them. These protests began as early as 1826 and multiplied in the era between the abolition of slavery in New York State in 1827 and nationwide emancipation. Crowds of Black women and men gathered to support captured community members during their trials in City Hall and sometimes attacked the kidnappers, the police officers who escorted them, or the judges who were generally inclined to rule against freedom. Most whites, even those who opposed slavery, as well as some Black leaders condemned the protests as disorderly and disruptive. But the throngs in the park signaled a threat of riot that could make a difference in the fates of captured people and even contributed to the mayor’s decision to stop enforcing the Fugitive Slave Act of 1850 within a year of its passage. Park protests were effective tactics in the struggle against slavery. 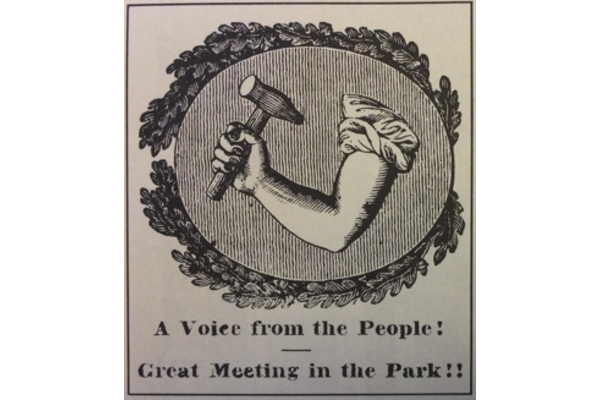 The Park at City Hall was also a crucial site of labor organizing for white men. When nine workers were arrested for engaging in the then-illegal practice of striking in 1836, the newspaper of the General Trades Union announced a “Great Meeting in the Park!!!” An accompanying image showed a light-skinned arm, with a mallet in fist, encircled by oak leaves. This was a fitting logo for a demonstration amidst the trees, where white men united across the trades but excluded workers of color and immigrants from the fight for better wages and working conditions. In the following decades, the labor movement expanded to welcome immigrants with roots in Europe, while white working-class animosity towards people of African descent continued to rise in the lead up to the Civil War. In antebellum New York, the Park at City Hall was a battleground over competing notions of justice, with Black New Yorkers envisioning full social equality and freedom from slavery while white workingmen fought for better wages and conditions just for themselves.

Authorities used policing, the military, and legislation to constrain the long tradition of protesting in the Park at City Hall. Officers chased Black New Yorkers from the park in 1826, but these protesters returned carrying bricks to defend themselves with. Those arrested in the fray that followed were sentenced to three years of hard labor, which was an extremely harsh punishment for the time. Responding to labor rallies at the park in the 1830s, municipal authorities called on the National Guard to seize the public space and perform military drills there that might scare workers into submission. But the labor struggle continued, growing more militant over time. By the 1870s, white workers organized in unprecedented numbers, marching for an eight-hour workday and striking for higher wages. In 1872, city leaders tried to suppress this activism by requiring permits for public meetings and processions. New York was the first city in the nation to limit the freedoms of assembly and speech in this way. To demonstrate in the Park at City Hall, activists now needed permits from the Department of Public Parks. Not only was this bureaucratic process burdensome, but park commissioners often refused to sanction meetings with a radical bent.

Today, the permitting process can take up to a month and carries a fee, effectively restricting the political possibilities of these public spaces. Facing arrest when protesting in parks without permission, activists have gone elsewhere. In 2011,Occupy Wall Street took place at Zuccotti Park, a privately owned plaza required to be open to the public 24 hours each day. The current protest takes place on the broad sidewalk outside the gates of City Hall Park. Still, police officers have handed out fliers noting that camping in parks is illegal. Requiring permits to protest in parks creates grey areas, confusion, and risks.

Most of all, the permitting process strangles freedom of expression in this city. This summer, it has been heartening to see protesters enter parks without seeking authorization. The next step is to open the gates of City Hall Park, restoring this land to its historical role as the city’s political center. Our democracy will be healthier if our constitutional rights to assemble and speak freely can flourish in public parks that belong to us all.