Examining Christian End Times Rhetoric in the Time of COVID

Andrew Joseph Pegoda (@AJP_PhD) holds a Ph.D. in History and teaches women’s, gender, and sexuality studies; religious studies; and English at the University of Houston. Previous articles can be found in The Conversation, History News Network, The Houston Chronicle, Time, and The Washington Post, among others. 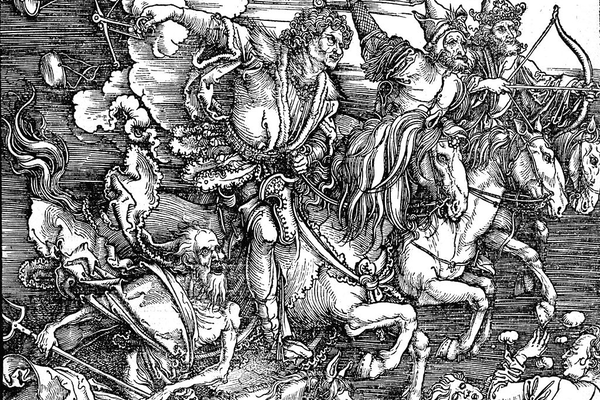 Since the coronavirus pandemic brought its initial wrath to the United States in March, I have seen constant posts from Christians on social media warning that end times have fully arrived.

A Twitter search for “end times” or “end of the world” brings up hundreds of recent posts, with more appearing every second. For example, Twitter user “Warrior For Christ” conducted a poll and found that 89 percent of responders believe that the Earth is in end times. Additionally, based on GoogleTrends data, there were significantly more searches for “end times” in March 2020 than in any other month since Google began collecting such data in January 2004.

Some fundamentalist Christians regard COVID-19 as a fulfillment of prophecies in the Bible’s fantastical Book of Revelation. They see the coronavirus as the first of seven plagues brought by avenging angels to envelop the world. The swarms of locusts in East Africa and the Australian wildfires are somehow meshed into all of this. Personally, my bet is on science and the saving angels in the persons of the researchers speedily developing a vaccine….We’ll eventually get through this coronavirus business, so don’t let it get you down. It’s not the end of the world.

My purpose in this article is to provide broader evidence-based perspective as to how privilege and historical illiteracy explain why a growing number of Christians, although not Catholics, see our current historical moments as indicators that Christ’s return is nearing. My purpose is not to confirm or debunk Christian theism or any other theism: I look to the past to offer broader perspective on today’s discussion of the end times.

Before going forward, we should take a second to remember that humans across time, place, and theism have long predicted and worried about the end of the world.

Most contemporary worldviews about the Christian apocalypse and about its God, Yahweh, are largely unique to the United States, and many are even rooted in fiction, most notably the Left Behind series. Signs of end times often include more and worse earthquakes and violent storms; increased cultural pluralism (especially when it comes to queer individuals and non-Christians); the rise of dictators, false prophets, and political radicals; decreased religiosity; and wide-spread death from disease, famine, and war.

From all available evidence, COVID-19 is certainly unprecedented and deadly. And those who survive can have permanent damage to their bodies.

So, why shouldn’t COVID-19 and its attendant famine and death be seen as part of end times? A look at causality points to human, not divine, agency at work.

It should be acknowledged that while not fully preventable, the worst of COVID-19 could have been avoided if the federal government in the United States had heeded initial warnings in December 2019. And COVID-19 is currently affecting the United States more than almost any other country because of the illusion held by some that “liberty” is in danger when they are asked to change everyday routines.

People can’t honestly use COVID-19 as an indication that the Second Coming will soon happen when COVID-19 is affecting the geopolitical area called the United States worse than other places on Earth because of its own arrogant, callous decisions. Near total allegiance among evangelicals to the Republican Party prevents many of them from seeing the COVID-19 crisis as a failure of their elected officials.

Distinct historical ignorance also obscures the frequency of mass death in the past—often on much larger scales.

In terms of disease, the 14th century European Plague (unfortunately, better known as the “Black Death”) killed somewhere between 50 and 75 million people, up to 200 million by some estimates. And the 1918 Flu epidemic, claimed 50 million. In terms of war, World War II alone took at least 100 million lives: 10 million in the Holocaust, 20 million in Russian Gulags, with millions and millions of soldier and civilian deaths.

If people had internalized historical knowledge of how frequently millions of people die in one historical moment, the smaller number of deaths brought about by COVID-19 wouldn’t seem unprecedented and wouldn’t seem like a sudden warning of the end times outlined in the rhetoric of Christian theism.

Moreover, people in the United States have largely been psychologically and physically shielded from the worst of recent world challenges and tragedies in part due to the nation’s superiority complex, and in part due to its longtime (now fading) status as the world leader. Dictators are and have been the norm across time and place. Not many countries voluntarily elect wanna-be dictators like in the United States, as is happening because some voters think it will accelerate the end. Famine and disease, due to lack of clean water, safe food and medication, are still extremely common throughout the world, based on decades of data collected by Our World in Data, the United Nations, The World Bank, World Health Organization, and other credible organizations.

Even in the United States, widespread disease and hunger have long been pervasive for those without the requisite connections and money—in other words, privilege. Because of the ever-popular prosperity gospel and because of systemic oppression perpetuated by the Imperialist White Supremacist Capitalist (Heteronormative Ableist Theistic) Patriarchy, disease and hunger (when acknowledged) have been seen as failures of personal faith and responsibility, not as end-times signs.

In other words, prosperity theology with its emphasis on the connection between moral—pious—behavior and then material comfort and good health encourages people to abandon any feelings of social responsibility toward one another (forget all notions of a social contract), and it encourages generally being blind to the plight of others. COVID-19, however, is new and infects even the faithful, hard-working folks and so it’s seen as a precursor of the end.

And none of this is to say that things aren’t getting rough around the world or in the United States. They are. But, unlike the apocalypse, we have choices.

It’s not only COVID-19 that we had (and still have, albeit with great limitations) control over: Almost all of the known or predicted issues that face the world now and in coming decades are preventable. Preventable if, as a global village, we encourage more responsible human behavior, we prioritize education, we listen to experts, and we guarantee food, water, and medicine to all—no exceptions, no conditions.

Indeed, many of the signs U.S.-based Christian theism uses to indicate end times are needlessly essentialist and point toward a worldview lacking in human free will, which is otherwise extremely popular among present-day Christians and United Statesians.

Consider the following examples: in contrast to Biblical signs that say famine is inevitable and something humans cannot control as time nears its end, due to abundance made possible by technology, hunger today only exists because too many humans choose to be selfish. Because of greed and poor planning—completely solvable problems—food waste is common across the world, with the United States discarding half of its food. And compared to recent decades, major storms might be or seem to be growing more violent: Specifically because of how humans carelessly overuse and abuse the Earth. Perhaps lessons in ecological theology would be beneficial for people.

More responsible human behavior would indeed eliminate many signs of end times (if such happened, would theologians develop new signs of end times to account for new social problems that they would rather ignore or use to scapegoat others?).

In terms of earthquakes, according to Robin Andrews, the U.S. Geological Survey, and the British Geological Survey, the occurrence of earthquakes has not really been increasing. A growing number of earthquakes are now detected simply because of more sophisticated technology. Humans now even cause earthquakes with fracking. And it occurs to me that everytime an earthquake of any significant degree occurs, social media sites are filled with coverage, creating an illusion that they occur more often.

And, in a nod to Big History, I must mention that countless earthquakes with strength larger than all modern earthquakes combined occurred during the planet’s past Hadean, Archean, and Proterozoic eras, especially as the Earth’s plates were taking shape and as it re-developed after major asteroid strikes. And this matters in our current discussion, as some Christians reject models of a 4,000-year-old Earth in favor of what’s called theistic evolution and a creation story with origins 4.5 billion years ago.

Other phenomena are taken for signs because of narrow, specific, yet vague theological interpretations in some sects of Christianity or even because of bigotry and a fear of the Other. Many Christians often don’t know (or don’t acknowledge) that queer theology exists, for instance. The “Christian Left” is also often ignored and written off as mere political radicalism rather than another valid denomination.

Historical amnesia and everyday privilege are what make it seem to some Christians that end prophecies are actively in progress.