Belligerent Patriotism, or Why Donald Trump Cannot Mourn the Dead

John Bodnar is Distinguished Professor Emeritus of History at Indiana University and author of Divided by Terror: Patriotism in Post-9-11 America (Univ. of North Carolina Press, 2021). 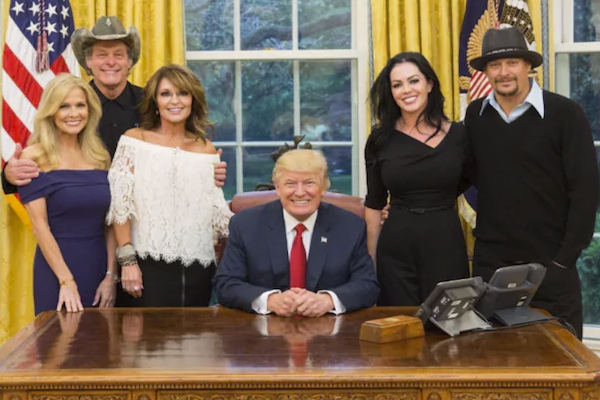 Belligerent Patriots have been on the march since 9/11. Loyal Americans who love their country more than many of the people in it have been pledging their allegiance through outbursts of anger and bigotry. In their aggressive worldview myths prevail; painful truths are ignored. They cast the nation itself in a glow of grandeur in order to avoid coming to terms with its most pressing problems. Intolerance and violence become weapons deployed by forceful loyalists intent upon inflicting their will on national and international life. Americans have certainly been lured into such parades before. Eruptions like the revival of the Ku Klux Klan in the 1920s or the McCarthy "witch hunts" of the early 1950s demonstrated clearly that citizens could be drawn to a vision of the nation imbued with hostility and devoid of liberal ideals like justice for all. In our times Donald Trump has taken up this mantle of belligerence, but George W. Bush had already handed him this menacing baton.

The archenemies of belligerent loyalists are empathic patriots able to see something of themselves in others and be mindful of their needs. They view with skepticism the central claim of belligerent patriots that the troubling realities of the nation's past and present--unjust wars, racial violence, sexual abuse--can be overlooked or swept away by tales of American virtue and greatness. These compassionate citizens choose to look at the real world as witnesses to the violence and suffering that plagues it even when things seem to be going well.

In the aftermath of 9/11, Bush rode a hot-tempered wave of Americanism that rose from the ashes of terror attacks to initiate a global war. Enemies were hunted down. Even the civil rights of many who lived in America were trampled simply because they looked like the men who flew the planes on 9/11. Bush did make a public appeal to his fellow citizens to respect the rights and safety of Arabs and Muslims in America in a moment when they were vulnerable to reprisals, but his rhetoric was not matched by deeds. Emboldened by legislation called the "Patriot Act," the Bush administration aggressively rounded-up and jailed without cause thousands of Arab, Muslim, and South Asian citizens and cast them in detention centers, often forgetting to inform their families of their whereabouts. John Ashcroft, Bush's attorney general, launched "Operation Tips," essentially a program based on racial profiling, that tasked Americans with looking for suspicious people in their neighborhoods that might be capable of terrorist acts. Bush also instigated a highly questionable invasion of Iraq--a nation with no direct connection to the 9/11 attacks--that resulted in the deaths of not only 4,491 American soldiers but untold numbers of innocent Iraqis as well.

Inevitably Bush's war triggered a strong critique of the human carnage and suffering it produced, much to the consternation of belligerent patriots. In Lafayette, California some local citizens began putting white crosses into the ground to make visible the growing body count of American soldiers in Iraq, an action that produced a fierce debate among the local population. Cindy Sheehan and other Gold Star Parents, who mourned the death of their offspring in Iraq, mounted an encampment near Bush's ranch in Crawford, Texas to protest the war. Sheehan's supporters also put up crosses with the names of dead American soldiers. Incensed by this challenge to the glorious view of the nation and the nobility of its military campaign, aggressive patriots struck back. One local man drove his pick-up truck over the crosses and destroyed many of them in an effort to banish the public expression of sorrow and grief. Soon buses arrived at the site carrying pro-war Americans who saw the assertion of a tragic view of the war as an insult to both the president and the soldiers who fought. Soon they were chanting "Cindy Go Home." Conservative media outlets took up their cause and heaped scorn on the mourners. A Fox News report called Sheehan a "crackpot." Television commentator Bill O'Reilly told his audience that Sheehan's protests were simply directed by "far left elements." When television newsman Ted Koppel decided to read the names of Americans lost in Iraq on his nightly program, some stations (owned by the Sinclair Broadcasting Company) prevented their viewers from watching.

Americans also sought to discredit the harsh reality of trauma in their times by removing makeshift memorials that had been erected after the emotional shock of the 9/11 attacks themselves. These commemorations were notable not only for their eclectic nature--often composed of items like teddy bears, baseball caps, photographs of the dead, and rosary beads--but for an aesthetic that resisted formal efforts to contain or remove traces of tragedy. Public memorial projects at Ground Zero in New York, Washington, and Shanksville, Pennsylvania did ultimately retain the names of those who died but were marked by the appearance of new structures and aesthetics that severely muted the gruesomeness of the sites on 9/11 and reduced their ability to convey anguish and any critique of American policies that might have led to the attacks in the first place.

By the time Donald Trump took office in 2017, the vast project of belligerent patriots to sidestep the trauma of the recent past and promote a brand of loyalty neglectful of the needs and rights of others was well underway. Trump, of course, made his love for America and his antagonism toward foreign arrivals central to his presidential campaign, and issued executive orders on immigration that amounted to a ban on Muslims once in office. At a meeting of the Conservative Political Action Conference in 2019, he famously hugged the flag while mouthing the words "I love you," much to the delight of his adoring audience. In the aftermath of a riot over white supremacy in Charlottesville, Virginia in 2017 he refused to take an unequivocal stand against “alt-right” extremists who fostered racist beliefs. When George Floyd, an African-American man, died after his air supply was cut off by the force of a policeman's knee, Trump gassed protestors who called for racial justice. Senator Tom Cotton, a belligerent colleague who had fought in Afghanistan and Iraq, called for a "show of force" against demonstrators who pleaded for a more tolerant America. When the nation was hit by a horrific pandemic in 2020, Trump was completely unable to sympathize with the health needs of millions of his fellow citizens now threatened with serious illness or death.

Pundits have noted Trump's hostile attitudes toward minorities and his inability to commiserate with those who suffered during the pandemic. Most have attributed his behavior to personal traits such as a fear of appearing weak or not in control of a situation. Certainly he has taken an aggressive stand against immigrants and protestors calling for justice and has been hesitant to admit the tragic dimensions of the pandemic at all because he senses that such positions will enhance his prospects for reelection. Yet the behavior of belligerent patriots in our times has made it clear that the type of allegiance they value most--and their image of America--leaves little room for an ethic of mutualism or compassion. When Trump stood in front of Mount Rushmore in July of 2020 and claimed that America was "the most magnificent country in the history of the world" he was actually denying the possibility that "we are all in this together."

The bane of belligerent patriots is not really enemies--and there are many--but ghastly truths and painful realities that promise to tarnish their visions of grandeur. Public displays of grief and mourning remind them and us of our dependency upon one another. Why else would we mourn if we did not care? They also endorse the point that the dead should not die in vain and that corrective actions like greater measures of tolerance or health care need to be taken so that the future will be better than the past. This is why belligerent patriots have expended so much effort to airbrush traces of trauma from our past and present. Trump has certainly refrained from the curative language Abraham Lincoln offered in the face of tragedy. Standing in a field of death at Gettysburg he insisted that the living could only honor the sacrifice of the soldiers by taking up the "unfinished work" of sustaining the idea of a government of the people, by the people, and for the people. Suffering had to lead to a more democratic America. Franklin Roosevelt made the same connection in his state of the union address to Congress in 1941 when he warned that war and death were on the horizon and that they could only be justified if Americans renewed their commitment to "four essential human freedoms" for all. Lincoln and Roosevelt could never take comfort in glorious triumphs or assertions of national greatness alone if belligerence did not ultimately give way to a more compassionate and just society.