Kevin Mattson is the Connor Study Professor of Contemporary History at Ohio University.  He is author most recently of We’re Not Here to Entertain: Punk Rock, Ronald Reagan, and the Real Culture War of 1980s America. 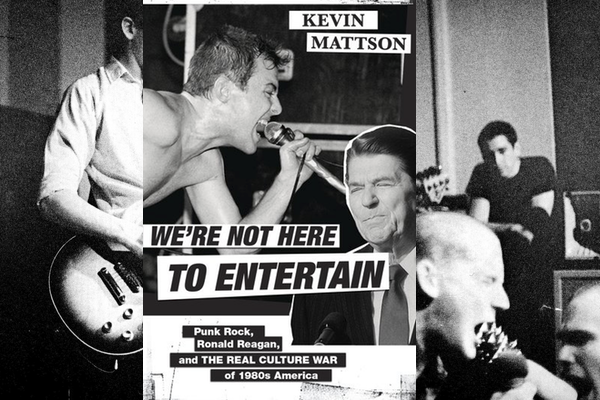 When most people hear the word “punk,” they think of drug addled, nasty behavior.  Like Sid Vicious of the Sex Pistols high on heroin, slashing himself with a broken bottle and wearing a t-shirt with a swastika on it.  Stupid and nihilistic both.

But if you push beyond the year the Sex Pistols imploded and when Sid Vicious died (1978-1979), you might be surprised to meet a punk who would tell you how he rejected drugs, alcohol, and sex – often labeling himself “straight edge” – but who still believed Johnny Rotten was right when the Sex Pistols singer called “anger” an “energy.”  Usually a suburban resident, this punk rocker would tell you how big corporate music CEOs kept releasing albums that sucked. Maybe our ideal type punk of the 1980s had realized that the music industry’s sales were tanking in 1980.  This kid, usually a young white male, would explain how he rejected corporate music and went into his basement and formed a band that played at small and cheap venues (sometimes even just friends’ houses), or produced his own zine pasted together and xeroxed, or drew art that served as social commentary about the boredom of suburban life.  All of this centered around the idea of Do It Yourself (DIY), its own kind of ethic.

As local punk scenes started to gel across the country in the early 1980s, Ronald Reagan ascended to power as president.  While contemporary conservatives fawn over him today, many punk kids at the time perceived him as scary and mean, projecting a surface image much like the celebrities he admired (he invited Michael Jackson to the White House in 1984, not just because Jackson was a celebrity with a certain brand but also because he saved the music industry in 1983 by reinvigorating record sales and the bottom line).  Reagan exuded celebrity himself: from his days as a movie actor in Hollywood to his time shilling for General Electric Theater on television.  When elected, some called him the Entertainer in Chief.

And just as much as punks hated corporate music, they also hated celebrities who thought of themselves as standing above the masses who consumed their every manufactured creation.  The punk poet Dennis Cooper wrote about seeing Blondie, probably sometime in 1980 – a band that had grown out of the 1970s CBGB punk scene and then “sold out” and broke big with a disco hit, “Heart of Glass.”  Cooper yelled at the stage while recognizing the futility of his action.  Debbie Harry, singer of Blondie, was a star: “she doesn’t even see me, or deem to answer my call ‘cause she’s above me, far above.”  He explained poetically that “arena rock” performers faced “warm eyes gazing up at them in audience, lives blown like a wheatfield by their beauty, our wild applause – their jackpot.”  Punks rejected this sort of “arena rock,” where celebrity acts played mechanically to distant audiences.  When punk kids started to “slamdance”, they broke down the wall between performer and audience member, as kids would just crawl onto the stage, make quick contact with a band member before “stage diving” back onto the dance floor.  Punk refused to genuflect to celebrities, which also seemed not such a bad ethic (especially now that we know what we know about Michael Jackson, for instance).

What punks really hated about Reagan was his bellicosity; he seemed a man looking for war (he’d get that with the invasion of Grenada in 1983).  One of his first acts as president was to “flip flop,” as we call it today.  He had campaigned in 1980 against Jimmy Carter’s strengthening of the Selective Service System (which called for registering young men as a preparation for a potential future draft).  Reagan’s libertarianism drew back from such big government activity.  But once he learned how the Selective Service System would speed up any future military mobilization, he went back on his campaign promise.  Not only did he eerily declare Vietnam a “noble cause,” he cracked down on young men who had not registered with the Selective Service, prompting a punk band called Wasted Youth to sing “no one cares if we die, reinstate the draft and tell us lies” and True Sounds of Liberty (TSOL) to scream, “I won’t go!”  A zine out of San Jose, California, Ripper, counseled fellow punks how to resist the draft.  And Raymond Pettibon, an artist mostly associated with his brother’s band, Black Flag, drew an image of what appeared like Arlington Cemetery, with rows and rows of small white crosses over graves, along with the words: “You are necessary.”

Reagan’s meanness hit young people hard throughout his first term.  Most explicitly when it came to his huge tax cuts for the wealthy accompanied by an increase in military spending, all of which generated the need for cuts at home (and killing off any idea that the Republican Party worried about deficits).  This included slashing funds for school lunch programs and the declaration that “ketchup” could be deemed a “vegetable,” in order to make a thirty percent cut without scaring people about kids’ nutrition.  Facing criticism, Reagan, at first, figured the charge of caring more about the military than kids’ lunches came from bureaucrats in the Department of Agriculture who hoped to embarrass him (what the right today would call the “deep state”).  But it was actually just Reagan’s worldview, which favored the wealthy and the military over kids living in poverty.  At the same time the school lunch program crisis hit, Jello Biafra, lead singer of the Bay Area band Dead Kennedys, released a compilation album showcasing the proliferation of punk bands—and from places like Arizona and Texas as much as San Francisco and L.A.  Pondering titles, Biafra came up with Let Them Eat Jellybeans (jellybeans were purported to be Reagan’s favorite food).  It could just as easily been entitled Let Them Eat Ketchup.

Some punks were discovering that Reagan governed via entertainment, that he couldn’t separate the two things. Consider when, in 1983, the president celebrated the Congressional Medal of Honor.  He suddenly broke into his memory bank, such as it was, and announced a posthumous Medal of Honor for a “young ball-turret gunner” who had lost control over his plane (Reagan narrated his story with suspense).  His commander supposedly counseled the young gunner and said, “Never mind, son, we’ll ride it down together.”  An inquisitive journalist covering the event thought this sounded strange, for how could there be a record of what was said by two men killed in battle without surviving witnesses?  The journalist Lars Erik Nelson searched for the original story and figured it was a memory of something Reagan read in Reader’s Digest or perhaps the 1944 movie A Wing and a Prayer.  Whatever, it showed that Reagan liked to live in his imagination and “dreams,” as he called them.  When asked about the whole episode, Reagan’s White House spokesman, Larry Speakes offered this: “If you tell the same story five times, it’s true.”

Earlier in the year, one young female punk who called herself Nancy wrote a long critique of the 1980s ethos published in the leading punk publication, MAXIMUMROCKANDROLL (MRR).  She recoiled at unfair (and unproven) portraits of punks as violent and nihilistic on television shows – ChiPs and Quincy, the latter claiming that punk rock drove young kids to murder – and outlandish movies like Class of 1984, which depicted punk kids raping a pregnant woman.  For Nancy, these portrayals by the mainstream media showed off how the entertainment industry resorted to sensationalism and misrepresentation (her argument turned slightly conservative sounding here, the way “straight edge” and its rejection of sex and drugs sounded conservative to some).  She recollected how the music industry tanked in 1979-1980, and desperately searched for the next big thing.  For instance, for a short period of time music execs thought they found what they wanted in new wave, “skinny tie” bands, like the Knack, who, Nancy pointed out, celebrated underage sex with their 1979 hit song “Good Girls Don’t (But I Do),” which was about a “teenage sadness… you  know you can’t erase til she’s sitting on your face” (the band’s most famous song, “My Sharona,” had the line, “I always get it up, for the touch of the younger kind”).  Nancy intoned, “Now who would you say is corrupting the youth?”  As she saw it, anything and everything the entertainment industry offered was a quickie search for sensation and whatever satisfied the bottom line of music execs.  If there was nihilism anywhere, it was with those who sold whatever entertained.

So in reality, punk rock of the 1980s was not about nihilism or violence; it wasn’t just a bunch of Sid Vicious wannabes.  In part, it was a visceral hatred of a president who seemed old, mean, and not terribly smart (he gave very few press conferences and preferred campaign rallies for his speeches).  Who governed by celebrating whatever the music industry and Hollywood offered.  Who made things up and avoided follow-up questions.  Who was rightfully called the entertainer-in-chief.  Those punk kids, usually thought of as violent and nihilistic, were instead those who got angry with the musical fare offered and who went into their basements to create their own culture.  And who questioned a president who saw politics as a sales job.  Their voices and commiserations might just inform the times we’re living through now.