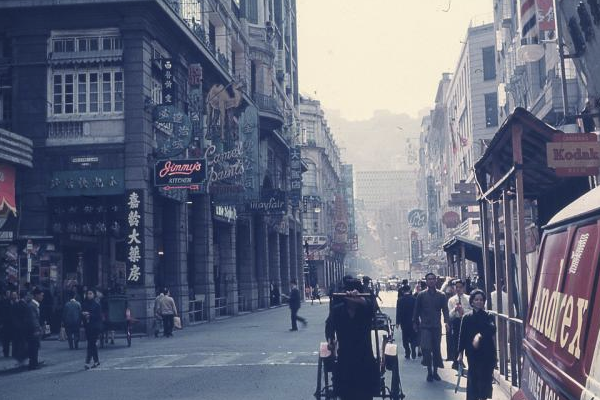 The flight from Tan Son Nhut Airport in Saigon to Kai Tak Airport in Hong Kong on Cathay Pacific Airlines was short but sometimes rough, and windy, especially when landing. After clearing customs, on leaving the airport I hailed a cab. With my luggage in hand,  "Jimmy's, please," I said to the driver who knew the way without me telling him. It was usually my first stop even before checking in at my hotel. I needed a Western style meal or even the semblance of one after almost two months in Vietnam without a break from the daily grind of the war. Weaving through traffic we were fast on our way to Jimmy's Kitchen, a European style restaurant and a Hong Kong staple, a respite for Western journalists, contractors, military men, entertainers and people with money from everywhere. NBC News' policy for Vietnam War staffers gave us ten days off every two months to catch our breath and refresh. More often than not, Hong Kong was my primary destination, a place I visited many times and then lived in 1966, 1967, 1968 and 1969.

Known simply as Jimmy's or, better yet, but rarely used, Jimmy's Kitchen, the restaurant sat on a darkened street in Kowloon down several concrete steps behind a dark wood door with only a single light at the entrance. Kowloon was far enough from the Central District of the city where most of the high-end shops, expensive restaurants, hotels and financial institutions were (and still are). Despite the huge demonstrations that are going on today, people tend to forget there were equally serious three-day demonstrations that turned into riots in 1966 over the price of a ferry ride. I was then in Saigon covering the Vietnam War when many people in Hong Kong protested the proposed rise of a few pennies, about 25 percent over the average cost of a daily ferry trip. With so many residents of Hong Kong on or near the poverty line, a few cents more for a ferry ride would seriously hurt their pocketbook. Because people were getting no response from the government, they demonstrated and ultimately rioted at the cost of one dead, almost 2,000 injured, and a like amount jailed. The riots lasted three days. The rioters lost and the ferry raised its rates. Quiet ensued. However the idea that demonstrations might work against government polices came into play. It is now apparent that those early protests were a precursor to today’s huge demonstrations in Hong Kong.

One year later in 1967, there were sudden and unexpected (for some) demonstrations in the name of freedom from the rule of the British, then the colonial masters of Hong Kong. Mao Zedong, China's cultish dictator, inspired the riots with his brand of brutal communist ideology outlined in his Little Red Book, the bible for his philosophy. I vividly recall witnessing a reasonably peaceful demonstration on a Hong Kong main street with hundreds of Chinese students wearing starched white shirts, dark trousers and plastic sandals, marching together as one, brandishing the famous red vinyl-covered book. It was late afternoon, the sun not yet down, and the end of the workday. Most of the people on the crowded street were passive and stood silently saying nothing while a few others punctuated the march with a smattering of orderly clapping hands.

The late 1960s was also a time of terror in Hong Kong when makeshift bombs went off in doorways and on the streets of the city. The Red Guard, a Mao creation formidable in its control of Mainland China, was looking to establish a foothold in Hong Kong and set off many bombs in the city in an effort to oust the British. Though people died and suffered injuries when some bombs went off, what the Red Guard did was disruptive and created corresponding fear more than serious destruction. It was enough to keep the city on edge. One day I was in a crowd of people at lunchtime as it surrounded a small suitcase in the middle of a crossroad. Traffic stopped. Police were everywhere. The growing crowd was quiet but tense as we shuffled our feet and waited for the police to disarm what everyone in the crowd believed was a bomb. To a collective sigh of relief, the bag was empty and everyone quietly dispersed. Dinner was waiting.

Today, with British colonialism long gone, ironically the many and continuing mass riots, mostly in the Central District and fomented by Hong Kong's younger generation, are for freedom from China in opposition to an increasingly repressive Mainland government. The riots regularly take place in the center of the city on the Hong Kong side of the island. Jimmy's, until it closed a few years ago, remained tucked away on a quiet street in Kowloon successfully serving its diverse patrons.

I do not want to overly extol Jimmy's virtues. In a big room with low lights and dark wood paneling, with wide space between tables covered in starched white tablecloths, waiters clad in pajama style uniforms moved silently and served with no fuss. The restaurant had the look and feel of an exclusive British Club in Mayfair, London. The drinks were lavish and large. The Hong Kong brewed San Miguel or Japanese Asahi beer was never cold enough, but that was how the British liked their favorite drink, so we adjusted. The food was good, not great. The steaks were well aged. Chicken Kiev was consistent. Beef Stroganoff always satisfied. The onion soup with a heavy dollop of cheese was chewy and delicious. It was more than a restaurant, though, that catered to mostly Westerners. Instead of designating us as American or French or British, we all fell under the easier term, European. In times of war we accepted the designation with good will.

The best part of the meal at Jimmy's was dessert, particularly its Baked Alaska, a treat to behold for its beauty and richness. I preferred the fried ice cream, an orb as big as a baseball consisting of freshly made vanilla ice cream wrapped in cake batter and quickly deep fried to create a sweet treat that I found nowhere else in Asia. It was always worth the trip.

Coming from Saigon as I did at least twice a year the lure of Jimmy's was, strange at it may seem, its sameness. Even now if I close my eyes, I see the British club it wanted to be and for a few hours a night for dinner, or at lunch, it had become a peaceful break from the reality of war in Vietnam. Today, all semblance of peace is gone as Hong Kong seethes in its struggle between authoritarianism and freedom.