Trump’s Comments on History Point Down a Stalinist Road

Walter G. Moss is a professor emeritus of history at Eastern Michigan University. He is the author of A History of Russia, Vol. I and Vol. II and is a Contributing Editor of HNN. For a list of his recent books and online publications, click here. 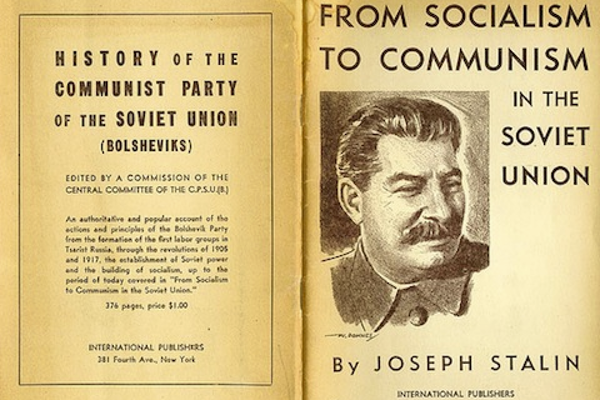 What President Trump said on September 17 at a White House Conference on American History was in keeping with his people-beyond-reproach view of our past. It also reminds me of Stalin's approach to Russian history. Like Stalin, Trump is trying to tell us to teach only his narrow version of “patriotic” history.

The president’s remarks (delivered in the National Archives Rotunda, the home of the Constitution) begin this way: “Our mission is to defend the legacy of America’s founding, the virtue of America’s heroes, and the nobility of the American character. . . . We want our sons and daughters to know that they are the citizens of the most exceptional nation in the history of the world.” He went on to specifically criticize the New York Times’ 1619 Project: “This project rewrites American history to teach our children that we were founded on the principle of oppression, not freedom.”

Historians have both praised and criticized this New York Times project, but as an article reposted on HNN indicated, Trump is “threatening to censor the way schools teach about the history of slavery and racism.” In emphasizing that history should teach American exceptionalism, “the virtue of America’s heroes, and the nobility of the American character,” and criticizing a project that stresses the centrality of slavery and racism to our history, Trump is starting down a Stalinist path.

During the 1930s, in the face of threats from Nazi Germany and an increasingly militant Japan, Stalin directed historians and schools to teach patriotism to help convince Soviet citizens that, like earlier Russian leaders such as Alexander Nevsky, Ivan the Terrible, and Peter the Great, he was defending Russian interests. In the 1920s, communist historians had generally been critical of such pre-Soviet rulers and indeed of much of tsarist Russia. But in the 1930s Stalin realized that history and patriotism could be more effective than appeals to communist ideas in uniting the country behind him. Two significant Sergei Eisenstein films of the period 1938-1944, both overseen by Stalin, Alexander Nevsky (1938) and Ivan the Terrible. Part 1 (1944), give some idea of how Stalin now wished earlier Russia’s past heroes to be portrayed. The first film ends with Nevsky’s just uttered words being shown in big letters on the screen: “He who comes to us with a sword, by the sword shall perish. On that our Russian land takes and will forever take its stand.”

With Ivan the Terrible, who ruled in the sixteenth century, Stalin felt a special affinity. Robert Tucker’s Stalin in Powertells us that Stalin said Ivan was a “great and wise ruler” and that he was “a role model” for Stalin’s “Great Purge” of the late 1930s.

Stalin’s dissatisfaction with Soviet historians’ depiction of the Russian past became evident in 1934 when he invited a group of them to the Kremlin, where he told them of his displeasure. Shortly thereafter he signed a decree mandating that new school history texts be prepared, and he later reviewed prospectuses for such texts. When a new text was approved and appeared in 1937, Tucker relates that Ivan the Terrible was depicted as “a hero of Russian history” and this view of Ivan now became “a part of the elementary education of every Soviet schoolchild.”

In 1938, Stalin went beyond telling others what history to write: he edited and partly wrote history himself in History of the All-Union Communist Party: Short Course. In his Soviet Civilization, Andrei Sinyavsky wrote that it “became required reading for any literate Soviet citizen . . . [and] the bible of Stalinism.” Before Stalin’s death in 1953, almost 43 million copies had appeared in 67 languages. Regarding the same Soviet period and the rewriting of history, historian Robert Conquest stated, “Accompanying falsifications took place, and on a barely credible scale, in every sphere. Real facts, real statistics, disappeared into the realm of fantasy. History . . . was rewritten. Unpersons disappeared from the official record. A new past, as well as new present, was imposed on the captive minds of the Soviet population.”

Both Stalin and Trump built upon the work of forerunners who approached history from an ideological position and attempted to buttress it with their version of the past. In the USSR it was the historians who adhered to Communist guidelines as determined by Lenin and Stalin. In the United States a “powerful tradition of educational conservatism has had a decisive role in shaping schools and culture” and influenced the teaching of history.

In affecting the writing and teaching of history, Trump, of course, has not gone as far as Stalin. As the title of this essay indicates, he has just “started down a Stalinist road.” How much farther he might go will depend largely on American voters. As I pointed out in an earlier HNN essay, in addition to the similarities of Trump and Stalin, there are many differences, including their operating in very different political cultures.

One difference not mentioned in the earlier essay was the two men’s interest and knowledge of history. Although I did mention Trump’s “deeply disturbing” lack of historical knowledge in a later essay, it did not mention Stalin. According to multiple sources, Stalin was both interested and knowledgeable about his country’s history.  Tucker, for example, has written that “he was prone . . . to see situations in terms of historical parallels,” that he was a “voracious reader,” and that he displayed a “keen interest” in Russian history. Contrast this with Trump, who seems to possess a “lethal aversion to reading.”

Thus Stalin’s problem was not (à la Trump) a lack of historical interest or knowledge, but his egoism and desire to skew history for his own sake. Unfortunately, though Trump knows little real history, he shares these traits.