Lawrence Baron is an emeritus professor of Modern Jewish History at San Diego State University. This column was originally published in the San Diego Jewish World. 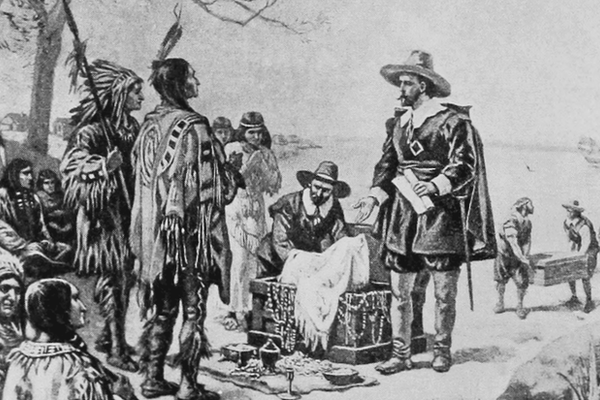 SAN DIEGO−President Trunk has decided to replace the current “crusade against American history” by setting up the 1776 Commission to teach students “about the miracle of American history.” Historians from Fox News have leaked advance outlines of the lesson plans for the different eras in the American past. Here’s the one for the colonial period.

1607: White Anglo-Saxon Protestants settled Jamestown. Since the indigenous inhabitants of the area hadn’t done anything to develop the land, the colonists claimed the area as their own promising to civilize it by building casinos, golf courses, and, most importantly, fast food restaurants. An Indian maiden named Pocahontas recognized how superior white people were and married one of them to improve the genes of her children. Since this went against natural selection, the name Pocahontas would connote a nasty woman in the future.

1619: The Virginia colony had a labor shortage so it advertised for workers from Africa and covered all their expenses to sail to America on spacious boats which had rowing machines for exercise. This arrangement worked out so well for both parties that millions more unemployed Africans chose to come to America in the next two centuries where they enjoyed free room and board as fringe benefits for the jobs toiling in the cotton fields.

1626: Peter Minuit, a Dutchman who was white and Protestant but not British−and two out of three isn’t bad−purchased Manhattan for $24. This was the first Manhattan real estate transaction and foreshadowed the great deals Donald Trump would make in the same market.

1692-1693: Witches fomented anarchy in Salem, Since the Republicans governed Salem, they executed twenty of them. In nearby towns with Democrat mayors, the Witches ruled and caroused with the devil in their suburbs.

1773: England had imposed taxes on the American colonies without letting the colonists vote on the matter. Voting would have been safe back then because the US Postal Service didn’t exist yet. The colonists protested by tossing imported tea into Boston Harbor. Many years later a political movement called the Tea Party would pave the way for Donald Trump to become president obliging him to lower taxes on big corporations.

1776: The colonies issue the Declaration of Independence. The original document was recently discovered and its opening paragraph differs from the one left-wing historians have foisted on unwitting American students for generations. “We hold these truths to be self-evident, that wealthy white men are created equal, that they are endowed by their Creator with certain rights; that among these are life for fetuses, liberty from masks, and the pursuit of gun ownership.”