Art historian Meredith Martin (NYU) and historian Gillian Weiss (Case Western Reserve University) are the authors of The Sun King at Sea: Maritime Art and Galley Slavery in Louis XIV’s France, forthcoming from Getty Research Institute Publications. Bonnie Siegler is a New-York based graphic designer and founder of the design studio Eight and a Half. 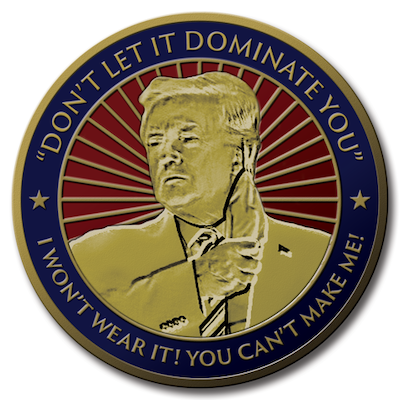 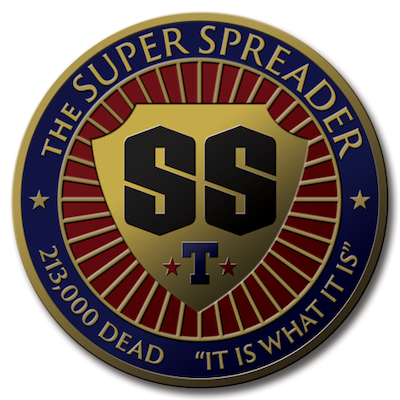 When Donald Trump left Walter Reed military hospital on October 6, he wanted to show his strength by channeling Clark Kent. But rather than rip off his shirt, he ripped off his mask. “Don’t let it dominate you,” he commanded on a day that the national death toll from COVID-19 reached 213,000.

Maybe our fearless leader got the Superman idea from the White House Gift Shop. Anthony Giannini, CEO and chief designer of this private entity based in Lititz, Pennsylvania, had just announced that a Superhero-themed medal celebrating Trump’s “historic” defeat of the evil coronavirus was in the works. Available for pre-order and priced at $100, it is scheduled to ship ten days after the election.

Honoring heads of state with medals is a time-honored custom embraced by Roman emperors as well as autocratic sovereigns like Louis XIV, France’s Sun King. In the U.S., the first Presidential medals were presented to Native American chiefs as a way to promote “peace and friendship” between First Nations and the federal government. Others, including so-called “challenge coins” gifted to military and law enforcement, commemorated the inaugurations and achievements of our country’s highest elected officials.

Trump has revived and expanded this tradition far beyond that of any previous White House occupant. His official challenge coin – bigger and glitzier than its predecessors – replaces the national motto, E pluribus unum (“out of many, one”), with his campaign slogan, “Make America Great Again.” Another coin touts Mar-a-Lago, his personal Versailles. Trump aides and acolytes have gotten in on the game, resulting, for instance, in a challenge coin commissioned by his private security detail that proclaims “Have Gun, Will Travel.”

Medals made by the White House Gift Shop also seek to puff up the President and spread his “l’état, c’est moi” message. Memorializing everything from “Genius Level Thinking” to summits with North Korea’s Kim Jong Un, they include an image of the impeached Trump gloating above the phrase “Acquitted for Life.” One example  – released on April 30, 2020, the day after Florida announced its reopening – depicts a coronavirus atom hovering villainously above a globe encircled by the words “Together We FOUGHT The UNSEEN Enemy/Everyday HEROES Suited Up.”

Trump has often been likened, by the outgoing French ambassador and others, to Louis XIV. Known for their mutual love of gold, big hair, and shameless self-promotion – one of Louis XIV’s medals portrayed him as the sun warming the earth beneath his motto Ne Pluribus Impar (“not unequal to many”) – the two leaders also share an appetite for newfangled medical treatments. Long before the President was given Regeneron, the “miracle” antibody cocktail with its own Superhero name, the Sun King underwent experimental surgery for an anal fistula, a painful ailment that his doctors had tried to treat with enemas and laxatives.

A medal heralding Louis XIV’s recovery shows him dressed as a Roman emperor, lifting his eyes heavenward below a Latin inscription that reads, “God the Protector of the Prince.” Other royal medals praise the Sun King’s “immortality” along with his persecution of Protestants, his crushing of European rivals, and his naval campaigns against North African Muslims.

All of this gilded propaganda made Louis XIV look like an invincible ruler with a glorious lineage. They also made him the butt of scathing scatological critique. Satirical medals produced by his European enemies condemned the king for his cruel despotism and mocked his capacity for self-destruction. Mimicking the royal medals they ridiculed, several fake designs were snuck into a pirated edition of the monarch’s official medal book. An especially “humiliating” example shows Louis XIV getting a rectal cleanse from the pope while vomiting coins into a basin held by the ruler of Algiers. On the reverse side, an exploding bomb foreshadows “The French Empire” imploding “of its own accord.”

Inspired by the Sun King’s detractors, the White House Gift Shop’s self-parodying statements, and Trump’s own Superman fantasies, we offer a medal honoring the Super Spreader. Unlike Louis XIV, who collected the coins that mocked him and apparently enjoyed viewing them with friends, the American leader has proven himself to be not only humorless but impervious to satire. Sorry, Mr. President. It is what it is.