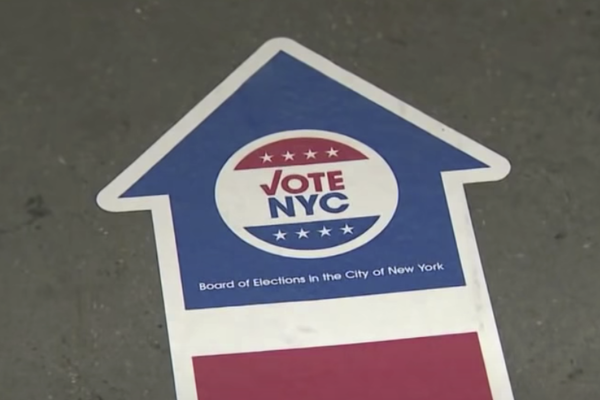 Before Election Day, more than eighty million people will have cast ballots through early voting. That is record breaking. It is an enormous number. It is already more than fifty percent of the entire turnout in 2016. With that figure, there are many stories waiting for the telling. This is one of them.

I marked the day: Saturday, October 24, 2020. My partner Eileen and I decided that we would vote early. We would get it out if the way and relax on Election Day knowing we had already made our choices. In New York City it was mild but crisp for the early fall. Jackets and sweaters required. We would be going to an outing the likes of which I had never seen or experienced. I was looking forward to what would come after we decided to vote early. We did not linger as we usually might for a Saturday. Soon we were out of the apartment after coffee and a light breakfast. It was a short walk to the designated polling place. We arrived before the polls opened. Good that we started early, though we probably should have started even earlier. Lines were already around the block. People with the same idea as we had were flooding the streets. A festive air prevailed. It was history in the making, quiet, with dignity, not flashy or explosive. Kids on bikes. Baby carriages. People walking dogs. That Saturday morning I would become a part of a massive change going on in America. We had already seen on televsion the long lines everywhere else in the country. That was all the inspiration we needed.

With Eileen and maybe a thousand other people we did not know, I stood in a line for more than four hours, something I would not normally do for anything. When I lived and worked in Asia and Europe, I sometimes paid people to stand in line for me, a common practice, to pay bills and buy tickets to various events. It showed how much I and other busy people did not like standing in line. That system does not exist in New York so I had to stand in line with everyone else. Patience was my new virtue. I gladly did it. In doing so, I interacted with people, many the same as me in income and education but who, I am sure, saw in early voting as a new way to express their belief in democracy. We talked. We commiserated. We joked. We commented. We sometimes sneered and snickered but we never lost faith in the opportunity afforded us because of early voting. We stood in front of each other, along side each other and behind each other. We attempted social distancing but that only partially worked in what had become a very long line and a very long wait for a serious purpose.

All of us shared the same purpose: the privilege of voting early, of engaging in something new, of being part of history. I covered elections for NBC News in Vietnam, South Korea, Great Britain, and Germany and, of course, in the United States. I produced stories in more primaries than I can count. I covered nine conventions and six general elections. Most elections seemed to be similar to a slog through endless mud. But not last Saturday. For me with this new way to vote, I enjoyed the change from the way I had always voted in previous years -- on Election Day.

And, though at times I was uncomfortable on legs that are no longer young -- my thighs and knees suffered the most -- I loved every minute of my long stay on a line that at times hardly moved. Everyone eventually got inside the polling place and voted. (I assume mostly without incident because all was quiet once we were inside.) Decorum was the mood of the day. At our polling station there was the line in and an exit for when a person finished voting. Early on the custodians of my polling place allowed the elderly and the disabled to enter first. Some slight grumbling ensued but quickly evaporated when we learned who had voted ahead of us. Good for them. It told me democracy was really at work. When they came out wearing their "I Voted Early!" stickers, people clapped. Later when we walked down the street proudly wearing our stickers people stopped us to ask how it went. Total strangers who felt like friends.

In the end, the huge number of early votes meant more participants in our system, thus more votes. Yes, a good thing. But, there is always a "but" and this is significant. The early turnout is important, but people should not have had to stand in line for as long as ten hours. That makes my four hour wait seem puny by comparison. Voter suppression should not rule. We must commend those who stood on line and stood up for democracy. That these people waited and then voted in spite of forced hardships is a testament to a belief in our constitution's long history. It means that as a people we are still on track in preserving the Republic and what we contend, despite attacks on its value, it still stands for.