Eisenhower’s Election Day Crisis Reminds Us What Presidents Must Do

William Lambers is the author of The Road to Peace and Ending World Hunger. 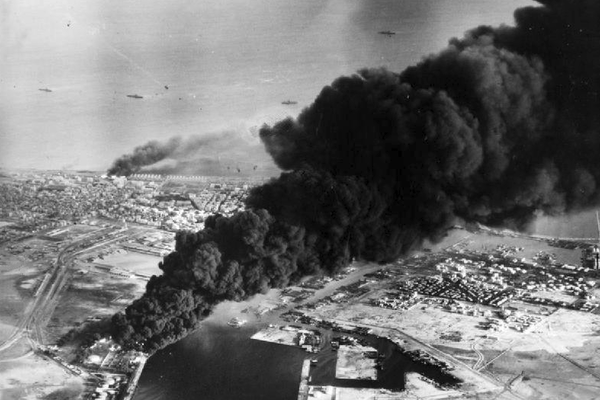 Dwight Eisenhower was worried on Election Day in 1956, but not about winning the presidency for the second time. “I don’t give a darn about the election,” he said that day.

Eisenhower was busy trying to avoid World War III. An invasion of Egypt launched days earlier by Israel, France and Great Britain threatened to spiral into a much wider conflict. The fighting had erupted over control of the Suez Canal, a valuable shipping waterway in Egypt connecting the Red Sea and the Mediterranean Sea.

Britain and France had owned the canal, but Egypt had seized and nationalized it that summer to help pay for a dam building project. The Suez crisis would turn violent at the end of October when Israel, France and Britain used military force to resolve the issue. Eisenhower was furious.

The Cold War rival Soviet Union warned it would come to the aid of Egypt and this prospect increased the dangers of a bigger war.

On Election Day morning (November 6, 1956) Eisenhower received intelligence briefings on the fighting and the possibility of Soviet intervention. Eisenhower told the CIA director Allen Dulles “If the Soviets should attack Britain and France directly, we would of course be in a major war.”

Adding to this frightful prospect was Admiral Arthur Radford’s intelligence briefing that the Soviets most feasible means of intervention included “long-range air strikes with nuclear weapons.” It was an unlikely but horrifying prospect nonetheless. Such was the danger of conflict in the age of nuclear weapons. This made peace an even greater imperative.

There was a way out, which Eisenhower had set in motion at the United Nations the previous week. A ceasefire resolution, presented by Secretary of State John Foster Dulles to the General Assembly, had passed overwhelmingly. The ceasefire called for the withdrawal of troops on all sides and a ban on arms shipments in the area. Canadian foreign minister Lester Pearson created the idea of a UN peacekeeping force to keep the canal safe and open for all.

As Eisenhower told the American people during a broadcast speech on the crisis "we do not accept the use of force as a wise or proper instrument for the settlement of international disputes.” The U.S. was not going to get involved in conflict nor enable it through arms or military support.

Israel accepted the resolution. Now Eisenhower was waiting on Britain and France and that was his big worry on Election Day.  Eisenhower eventually received word from British Prime Minister Anthony Eden that they would accept the ceasefire. The fighting ended.

After the ceasefire Eisenhower made it a priority to “provide to the area, wherever necessary, surplus foods, and so on, to prevent suffering.” All too often the hungry and poor victims of war are forgotten. Even when guns cease firing, hunger still remains on the assault. Eisenhower’s Food for Peace program would help feed the Suez war victims. Eisenhower also directed millions in food aid to Hungary to help victims of a brutal Soviet attack on civilians in the aftermath of an uprising against the Communist government there. The Hungarian crisis occurred right at the time as Suez causing major conflict on two fronts in the Cold War.

The Suez crisis reminds us that we need presidents who seek to avoid war. Military actions have awful consequences, which Eisenhower understood the depth of. Yet today we have so many wars ongoing and U.S involvement directly or indirectly.

President Trump has provided military support and arms sales to the Saudi coalition fighting in Yemen’s civil war. This has prolonged the conflict and hunger crisis and placed Yemen on the brink of famine. Save the Children says over 85,000 Yemeni kids have died from hunger and disease since the war began.

The World Food Program feeds over 12 million Yemenis a month with life-saving aid, and funding is difficult to obtain. Some areas are cut off from aid making the need for a nationwide ceasefire urgent.

The International Rescue Committee is calling for "a major push by the international community to use all diplomatic leverage to bring warring parties to the negotiating table to agree to a nationwide ceasefire and political settlement to the conflict. The US, UK, France, and others, knowing that they continue to authorize the use of their weapons in this conflict, must end all support to warring parties."

America should be bringing peace to Yemen, instead of enabling the combatants there. That is what we must expect of any president, to build peace and seek to avoid war.