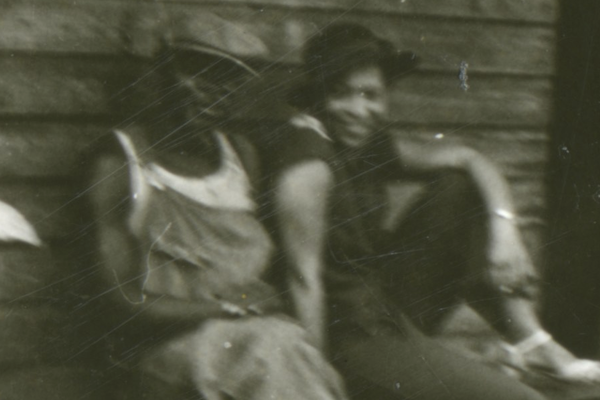 Zora Neale Hurston, photographed during anthropological field research in Florida, 1935.
Photo Library of Congress
Against the strong headwinds of racism and resistance against women’s rights, Zora Neale Hurston forged a life dedicated in her writing to exploring racism and also the lives of African American women. Nobel Prize winner Toni Morrison described her as “one of the greatest writers of our time.”
Hurston was one of the foremost writers of what was called the Harlem Renaissance, a period from 1918 to the mid-1930s, which has always fascinated me. The “war to end all wars” was over, our country launched into the great redemptive experiment of Prohibition, the 1920s roared in with the Charleston and jazz, and movies were no longer silent. On a personal level, this was the time when my father began tap-dancing and when Aunt Rose went rogue and cut her hair.
Harlem was the primarily African American community in northern Manhattan, New York City, where this “rebirth” was centered. Primed with a population which had re-located from the segregated South during the Great Migration, Harlem was the scene of a great flowering of art, literature, and music, giving artistic expression to the black yearning to breathe truly free and energizing African Americans to demand equality and respect as human beings and as artists.
Hurston was one of the writers that gained national prominence during this period along with others such as Jessie Fauset, Claude McKay, James Weldon Johnson, Alain Locke, Omar Al Amiri, Eric D. Walroud, and Langston Hughes. Their successes led to opportunities finally to publish with mainstream publishing houses.
Zora Neale Hurston—novelist, folklorist, and anthropologist—was born in Notasulga, Alabama, in 1891, and grew up in Eatonville, Florida, near Orlando. She attended Howard University, and then switched to Barnard College, the only black student there, graduating in 1927.
During her writing career, she penned four novels, two folklore books, an autobiography, and over 50 short stories, essays, and plays. Her novels were under-appreciated for decades until Alice Walker, the Pulitzer Prize winning author (The Color Purple) wrote about her in an article entitled “In Search of Zora Neale Hurston” in “Ms.” magazine in 1975.
I have read two of her books: her most popular novel, Their Eyes Were Watching God, and also the non-fiction book, Barracoon. Published in 1937, the novel tells the story of the struggles of a fair-skinned, independent-minded African American woman named Janie Crawford: three marriages, hardship, poverty, and ending with the horrible hurricane of 1928 and its aftermath. I found the book distinctive for the precision she took in expressing the common black vernacular, her description of the hurricane and the terror it inspired, her portrayal of the strong, female protagonist, and finally the dramatic ending.
In Barracoon: The Story of the Last Black Cargo, a work of non-fiction, Hurston relates the story of Cudjo Lewis (originally Oluale Kossula), the last known surviving slave from the last known slave ship, the Clotilda, which made the transatlantic voyage from Africa some 50 years after such trade was outlawed.
Writing in the late 1920s and early 1930s, Hurston relates in her Introduction: “Of all the millions transported from Africa to the Americas, only one man is left. He is called Cudjo Lewis and is living at present at Plateau, Alabama, a suburb of Mobile. This is the story of this Cudjo.”
The result of many interviews with Lewis over three months, the book gives insights into his life: his childhood in Africa, the attack by female warriors on his hometown, the trail of misery after being taken prisoner and being marched overland to the barracoons (“barracks” or holding structures) of Ouidah on the coast, the ordeal of the Middle Passage on the Clotilda, the years of slavery during the Civil War, and finally his role in founding Africatown in Alabama.
In February of this year, I had just finished her novel and found myself in Fort Pierce, FL. How surprised I was when I picked up the “Fort Pierce Magazine” and found her featured in it. She spent the last years of her life there as a freelance writer for newspapers and magazines. She also taught at Lincoln Park Academy, a segregated secondary school. Majorie Harrell, president emeritus of the Zora Neale Hurston Florida Education Foundation, related: “She was my teacher for 10th grade and part of 11th.  …she would give out an assignment and then be buried in her writing.”
Marvin Hobson, current president of the foundation, said: “It’s been over 50 years since her death [1960] and her work is still being released. She is part of who we are as African American people.”
In 1973, Alice Walker placed a headstone at her grave site bearing the words: “A GENIUS OF THE SOUTH.”
(Note: A brief version of this essay was originally published in the Newport Daily News on November 16, 2020.)
Contributing editor, Fred Zilian (zilianblog.com; Twitter: @FredZilian) is an adjunct professor of history and politics at Salve Regina University.
comments powered by Disqus