Reckoning With Slavery: What A Revolt’s Archives Tell Us About Who Owns The Past

Marjoleine Kars is Associate Professor of History at the University of Maryland, Baltimore County. 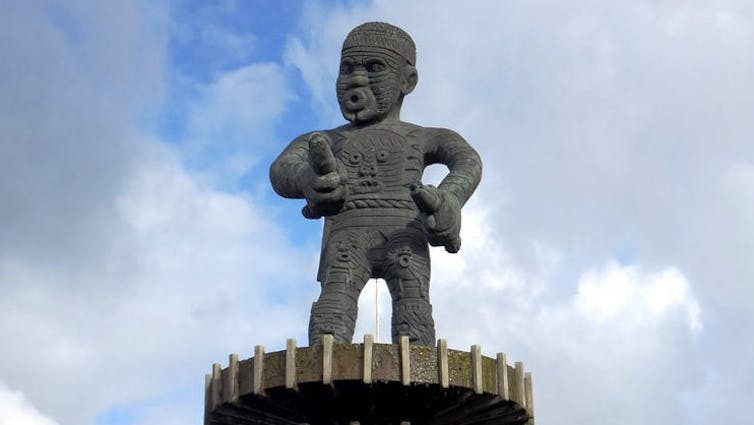 The consequences of 400 years of the Atlantic slave trade are still felt today. Untangling the power structures and systemic racism that came with slavery is ongoing, with police brutality, memorials to slave owners and reparations forming part of the discussion.

But as the United Nations marks Dec. 2 as the International Day for the Abolition of Slavery, a practice it notes “is not merely a historic relic,” modern society also has to reckon with another question: Who has access to the records about slavery’s past?

I was struck by this question recently as I gave a Zoom talk in Guyana on my new book Blood on the River: A Chronicle of Mutiny and Freedom on the Wild Coast about a slave rebellion in Berbice, now Guyana, that took place in 1763-1764.

During the revolt, former slaves organized a government and controlled most of the colony for almost a year. The Dutch either fled altogether or holed up on a well-fortified sugar plantation near the coast. A regiment of European soldiers sent from neighboring Suriname mutinied and joined the rebels they had come to defeat. But obligated by treaties, indigenous peoples such as Carib and Arawak fought on the side of the Dutch. The revolt ended when the rebels, out of food and arms, were overpowered by enemies who had received an infusion of men and supplies from the Dutch Republic.

The uprising, unusual among Atlantic slave rebellions for its length, size and near success, is barely known outside Guyana. But even African-descended Guyanese, it turns out, know less than they would like. Almost 13,000 people, intrigued by new information about a foundational chapter in their history, had tuned in to watch my presentation on Facebook and Zoom.

First colonized in 1627 to trade with Amerindians, Berbice passed into the hands of an investment company 100 years later that exploited the colony, which was growing coffee, cacao and sugar.

Berbice became British Guyana in the early 19th century and gained independence as the English-speaking Cooperative Republic of Guyana in 1966. Modern-day Guyanese view the slave rebellion as the origin of their republican inclinations.

Yet, all of the records related to the rebellion – in fact, most of the country’s historical records – are in archives in London and The Hague.

The sources for the uprising are extensive. There are the usual colonial records, such as the colonial governor’s daily journal, letters from officials and merchants and military reports. They are tainted by self-interest, Euro-centrism and racism.

More rare in the history of Atlantic slavery are letters sent by rebel leader Kofi to his Dutch counterpart. An African from the Gold Coast who had been forcibly taken to Berbice as a child, Kofi sought to end the military conflict through diplomacy.

And then there are the extraordinary testimonies of 900 suspected rebels and bystanders. They were taken as part of the Dutch kangaroo court to investigate guilt in the rebellion and condemn people to the rack, the pyre and the gallows.

These records, too, are problematic. The people on the stand feared for their lives. A Dutch clerk translated their answers from Creole into Dutch, summarized them, and put them in the third person. Using them requires, like most historical records, great care.

Still, the testimonies represent the voices of African-Guyanese ancestors. But the manuscripts have lain in the Dutch National Archives since the 19th century. They are in standard Dutch rather than the Creole language of Dutch Berbice likely more prevalent among the enslaved population at the time, and their existence was heretofore unknown in Guyana.

The copious records reveal not only the political course of the rebellion but how people felt about it. Many young men joined enthusiastically. Older people and Creoles (people born in the colony) had more to lose in terms of family and meager possessions and were more reluctant.

To remain on the sidelines, they lived quietly on their plantations, dodging anyone, whether Europeans, rebels or Amerindians, or by hiding in the savanna or rainforest until the coast was clear. They were motivated by a desire not only to survive but also to remain masterless and ungoverned. 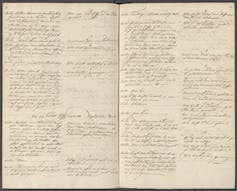 Page from investigation into Berbice revolt. National Archives of the Netherlands

In his letters to the Dutch, Kofi proposed dividing the colony in two. It seems likely that he intended to keep several sugar plantations in production, perhaps with forced labor, in order to participate in the world market. Some 30 years later, Haitian revolutionary Toussaint L’Ouverture, too, would force self-emancipated Haitians to work in the cane fields for similar reasons. Many ordinary Guyanese were not up for this.

Many revolt narratives would have us believe that people are eager to rebel, sharing a common vision of freedom. This is not always the case. It was not in the American Revolution, nor was it in Berbice.

An act of emancipation

At my Zoom lecture on Nov. 24, listeners asked many questions. But they were particularly interested in the court testimonies.

Why, some asked in the chat, were these records still housed in the National Archives in The Hague? Shouldn’t they have been gifted back, or better yet, transcribed and translated? That way, African-Guyanase would be able to interpret the records for themselves and tell their own stories.

As it happens, the Dutch National Archives recently put all of Berbice’s records online – but that does not solve the language problem. I was able to put my Guyanese host in touch with a staff member at the National Archives who seemed receptive to the idea of publishing a translation of the investigations in English.

Reckoning with slavery requires having access to the records of the past. After all, writing one’s own history, too, is an act of emancipation.