Cameron Addis is a history professor at Austin Community College. He’s written articles on the Whitman Massacre, the 1769 Transit of Venus, and jazz bassist Gene Ramey, along with authoring a free digital textbook, History Hub. He wrote Jefferson's Vision for Education (2003) and “God and Man at the University of Virginia” in The Founding of Thomas Jefferson’s University (2019). 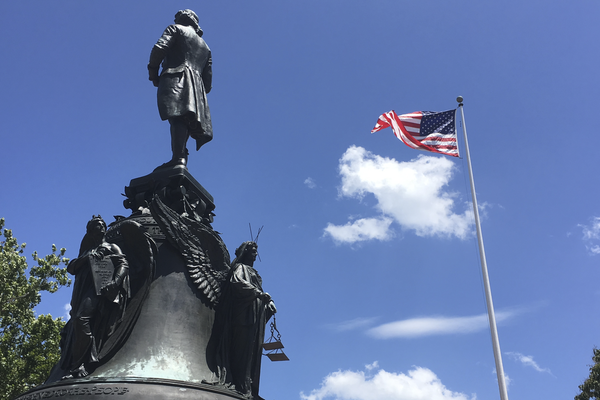 January 16th marks National Religious Freedom Day in the United States, commemorating Thomas Jefferson’s 1786 Virginia Statute for Religious Freedom. These are trying times for Jefferson’s reputation and it’s understandable that Americans frustrated with ongoing racism focus on his slaveholding legacy. Some of his descendants want his memorial in Washington removed, state Democratic parties have renamed their annual Jefferson-Jackson dinners, and his hometown of Charlottesville voted to discontinue celebrating his birthday, its mayor suggesting that Jefferson could celebrate in Hell. At the college he founded in retirement, the University of Virginia (UVA), protesters on the left and right reduce Jefferson to a white supremacist. At a 2020 Charlottesville anti-Confederate statue rally in the wake of George Floyd’s murder, one protester gestured toward Moses Ezekiel’s Jefferson monument at UVA’s Rotunda and said, “Speaking of statues we have to tear down, how about that one right there?” In 2016, 469 faculty and students petitioned UVA’s president not to quote Jefferson because his legacy undermined the school’s mission. The next year, UVA alum Jason Kessler “united the [alt] right” around Ezekiel’s statue, unwittingly underscoring progressive criticisms by laying claim to Jefferson. Among anti-racist protesters who shrouded the statue in black a month later, one shouted, “There’s only one side to this.”

But Ezekiel’s Rotunda statue also represents Jefferson’s commitment to religious freedom, and religious bigotry is only less pressing today than racial bigotry because of progress Jefferson helped bring about. On January 16th, Americans should remember his hard-fought crusade against the bigotry that fueled the Crusades, Religious Wars, Holocaust, and 9/11, just to name a few lowlights. Even now, Americans are witnessing attacks on churches, synagogues, and mosques, along with discrimination justified in the name of religious liberty. Religious intolerance and violent sectarianism draw from the same tribalistic wellspring as racism and the strands overlapped in the antisemitism that animated Kessler’s torch-lit march across UVA’s campus.

Ezekiel highlighted the 1786 Virginia law’s pioneering guarantee of full-blown freedom to people of all faiths. His detail includes four angels at the base. Brotherhood, facing west toward UVA’s non-denominational chapel, holds a scroll titled “Religious Freedom, 1786,” listing God-Jehovah, Brahma, Atma[n], Ra, Allah, and Zeus. The Jewish sculptor explained that “[all are] God -- and have no other meaning and have each an equal right and the protection of our just laws as Americans.” Granted, there weren’t many Muslims or Hindus in Revolutionary Virginia, but the law’s generous boundaries staked out safe ground when many mainline Protestant-led states were discriminating against Catholics, evangelicals, Deists, and non-believers. Jefferson’s bill also prohibited compulsory religious taxes. We slip into thinking that the Bill of Rights ended religious discrimination, but the establishment and free exercise clauses of the First Amendment weren’t incorporated against states until the 1940s.

In the meantime, UVA was a working model of how Jefferson and James Madison envisioned religious freedom. UVA embodied the Virginia Statute, forerunner to Madison’s First Amendment. Jefferson bucked prevailing trends to create an Enlightenment beacon in an era of evangelical revivals. Most colleges had started as seminaries and those that experimented with ecumenical administrations (Penn, Columbia, North Carolina, Transylvania) gave way to denominational control, as would’ve been the case in Virginia had Jefferson not managed to circumvent the will of the people -- ironically, given his republican commitment. The only other school that put the premium on science he sought was West Point, which Jefferson started as president in 1802. The university should stress how innovative his curriculum was when they contextualize Jefferson’s statue, as they plan to soon.

Non-denominational UVA had no divinity professors or compulsory worship. The Rotunda library, inspired by the Roman Pantheon, symbolically displaced a traditional gothic chapel at the heart of campus, with a spare room in its basement set aside for ecumenical worship and a proposed planetarium with the dome as its easel. Science and ethics courses supplanted orthodox indoctrination and they taught about religion so that students could think for themselves. Madison compiled a reading list of diverse theologians dating to antiquity. Said one Presbyterian: “[w]hen Satan promised all the kingdoms of the world to Christ he laid his thumb on Charlottesville and whispered, ‘Except this place, which I reserve for my own especial use.’” Whereas modern progressives protest Jefferson for owning enslaved workers, early UVA students opposed erecting their founder’s statue because he wasn’t Christian. Yet, within Protestantism at least, religion thrived at UVA precisely because it lacked sectarian control, similar to how Jefferson and Madison accurately predicted it would nationally under the First Amendment. Jefferson invited denominations to build seminaries around the campus periphery with complimentary UVA tuition for seminarians, but none accepted because, as he predicted, each wanted total control. Later, to placate criticism that UVA’s infidelity caused an 1829 typhoid outbreak, its board rotated an inter-Protestant chaplaincy. The school also set itself apart by hiring Jewish and Catholic professors, which was unheard of at the time in the Ivy League.

To see why Jefferson’s vision was win-win, compare UVA to Yale. In God and Man at Yale (1951), William Buckley, Jr. echoed UVA’s earlier critics, bemoaning that his school had strayed from orthodox indoctrination into voluntary chapel and merely teaching about religions. But Yale was originally Congregational. Had it maintained tradition, it wouldn’t have built the Catholic chapel where Buckley worshiped.

America wrongly puts stock in its Pilgrims to honor religious freedom, even though they had no more interest in others’ freedom than did the Anglicans from whom they fled. But pluralistic colonial America had true pioneers of religious liberty, like Baptist Roger Williams and Quaker William Penn, who envisioned people of different faiths co-existing without slitting each other’s throats. Jefferson and Madison overcame stiff resistance to cement that idea -- first in the Virginia Statute, then the First Amendment, with UVA as a microcosm.