How Can America Heal from the Trump Era? Lessons from Germany’s Transformation into a Prosperous Democracy after Nazi Rule 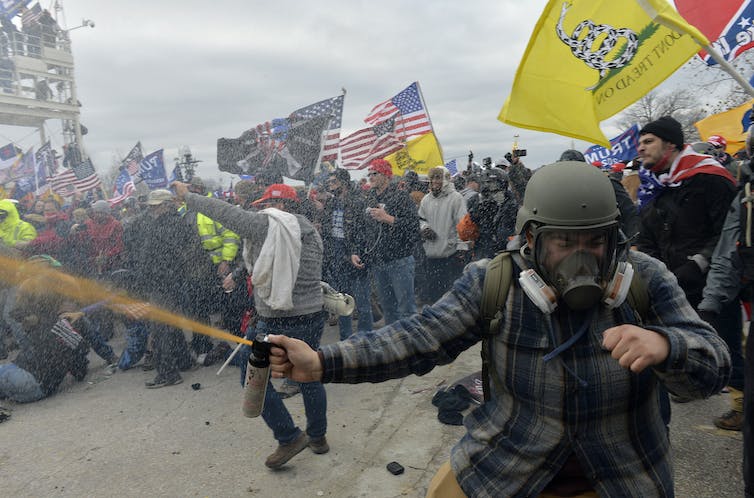 Comparisons between the United States under Trump and Germany during the Hitler era are once again being made following the storming of the U.S. Capitol on Jan. 6.

Even in the eyes of German history scholars like myself, who had earlier warned of the troubling nature of such analogies, Trump’s strategy to remain in power has undeniably proved that he has fascist traits. True to the fascist playbook, which includes hypernationalism, the glorification of violence and a fealty to anti-democratic leaders that is cultlike, Trump launched a conspiracy theory that the recent election was rigged and incited violence against democratically elected representatives of the American people.

This is not to say that Trump has suddenly emerged as a new Hitler. The German dictator’s lust for power was inextricably linked to his racist ideology, which unleashed a global, genocidal war. For Trump, the need to satisfy his own ego seems to be the major motivation of his politics.

But that doesn’t change the fact that Trump is just as much of a mortal danger to American democracy as Hitler was to the Weimar Republic. The first democracy on German soil did not survive the onslaught of the Nazis.

If America is to survive the attacks of Trump and his supporters, its citizens would do well to look to the fate of Germany and the lessons it offers Americans looking to save, heal and unite their republic.

From Nazi ideology to democracy

The Weimar Republic, the first democracy on German soil, was a short-lived one. Founded in 1918, it managed to survive the political turmoil of the early 1920s, but succumbed to the crisis brought about by the Great Depression. It is therefore not the history of the failed Weimar Republic but rather that of the Federal Republic, founded in 1949, that provides important clues.

Just like Weimar, the West German Federal Republic was founded in the aftermath of a devastating war, World War II. And, just like Weimar, the new German state found itself confronted with large numbers of citizens who were deeply anti-democratic. Even worse, many of them had been involved in the Holocaust and other heinous crimes against humanity.

During the first postwar decade, a majority of Germans still believed that Nazism had been a good idea, only badly put into practice. This was a sobering starting point, but Germany’s second democracy managed not just to survive but even to flourish, and it ultimately developed into one of the most stable democracies worldwide. 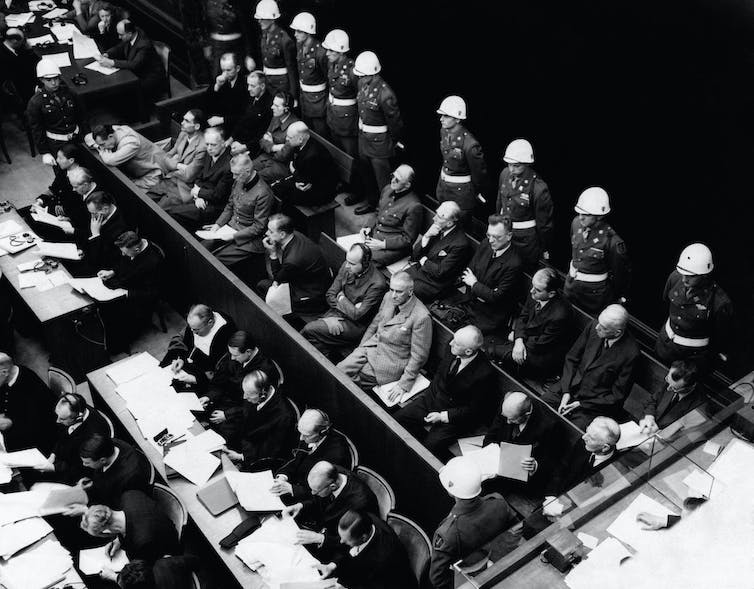 German war crimes defendants sitting in a courtroom at the Nuremberg trials in November 1945. Among them are Hermann Goering, Rudolf Hess and Joachim Von Ribbentrop. Mondadori Portfolio by Getty Images)

For one, there was a legal reckoning with the past, beginning with the trial and prosecution of some Nazi elites and war criminals. That happened first at the Nuremberg Trials, organized by the Allies in 1945 and 1946, in which leading Nazis were tried for genocide and crimes against humanity. A further significant reckoning happened during the Frankfurt Auschwitz trials of the mid-1960s, in which 22 officials of the SS, the elite paramilitary organization of the Nazi Party, were tried for the roles they played at the Auschwitz-Birkenau death camp.

To protect the new German democracy from the political divisions that had plagued parliamentary government during the Weimar period, an electoral law was introduced that aimed to prevent the proliferation of small extremist parties. This was the “5 percent” clause, which stipulated that a party must win a minimum of 5% of the national vote to receive any representation in parliament.

In a similar vein, Article 130 of the German Criminal Code made “incitement of the masses” a criminal offense to stop the spread of extremist thought, hate speech and calls for political violence.

Yet as important and admirable as these efforts were in exorcising Germany’s Nazi demons, they alone are not what kept Germans on a democratic footing after 1945. So, too, did the successful integration of anti-democratic forces into the new state.

This was a painful and amoral process. In January 1945, the Nazi Party had some 8.5 million members – that is, significantly more than 10% of the entire population. After the unconditional surrender of Nazi Germany, many of them claimed that they had been only nominal members.

Such attempts to get off scot-free did not work for the Nazi luminaries tried at Nuremberg, but it certainly did work for many lower-level Nazis involved in countless crimes. And with the advent of the Cold War, even people outside of Germany were willing to look past these offenses.

Denazification, the Allies’ attempt to purge German society, culture and politics, as well as the press, economy and judiciary, of Nazism, petered out quickly and was officially abandoned in 1951. As a result, many Nazis were absorbed into an emerging new society that officially committed itself to democracy and human rights.

Konrad Adenauer, the first West German chancellor, said in 1952 that it was time “to finish with this sniffing out of Nazis.” He did not say this lightheartedly; after all, he had been an opponent of the Nazis. To him, this “communicative silencing” of the Nazi past – a term coined by the German philosopher Hermann Lübbe – was necessary during these early years to integrate former Nazis into the democratic state.

Where one was going, advocates of this approach argued, was more important than where one had been.

For many, this failure to achieve justice was too heavy of a price to pay for democratic stability. But the strategy ultimately bore fruit. Despite the recent growth of the far right and nationalist “Alternative for Germany” party, Germany has remained democratic and has not yet become a threat to world peace.

At the same time, there were increasing efforts to confront the Nazi past, especially after the upheaval of 1968, when a new generation of young Germans challenged the older generation about their behavior during the Third Reich. 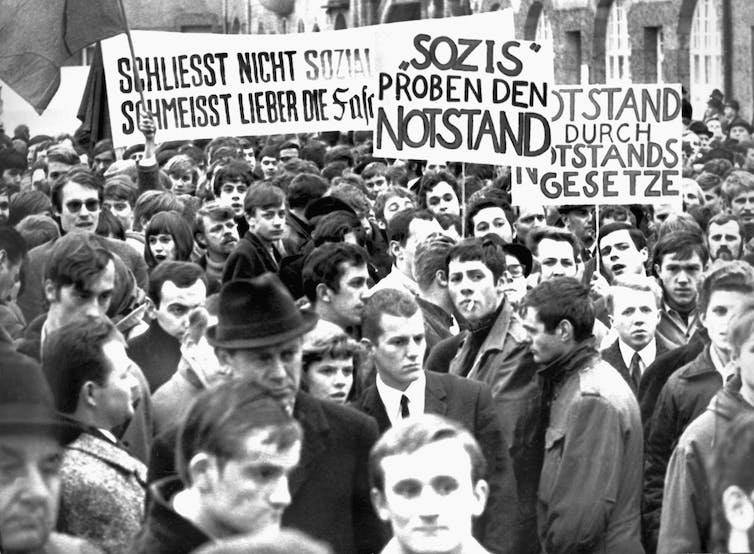 In 1968, young Germans demonstrated against the older generation about many concerns, including their behavior during the Third Reich. Karl Schnörrer/picture alliance via Getty Images

Another crucial factor helped make Germany’s democratic transition a success: an extraordinary period of economic growth in the postwar period. Most ordinary Germans benefited from this prosperity, and the new state even created a generous welfare system to cushion them against the harsh forces of the free market.

In short, more and more Germans embraced democracy because it offered them a dignified life. As a result, philosopher Jürgen Habermas’ concept of “constitutional patriotism” – as one interpreter put it, that citizens’ political attachment to their country “ought to center on the norms, the values and, more indirectly, the procedures of a liberal democratic constitution” – eventually came to replace older, more rabid forms of nationalism.

[Get our most insightful politics stories. Sign up for The Conversation’s Politics Weekly.]

In the coming weeks and months, Americans will debate the most effective ways to punish those who instigated the recent political violence. They will also consider how to restore the trust in democracy of the many millions who have given their support to Donald Trump and still believe the lies of this demagogue.

Defenders of American democracy would do well to study carefully the painful but ultimately successful approach of the Federal Republic of Germany to move beyond fascism.

The United States finds itself in a different place and time than postwar Germany, but the challenge is similar: how to reject, punish and delegitimize the powerful enemies of democracy, pursue an honest reckoning with the violent racism of the past, and enact political and socioeconomic policies that will allow all to lead a dignified life.