A Lesson Unity and Renewal: George Washington and the Building of the Capital City

Robert P. Watson is Distinguished Professor of History at Lynn University and the author or editor of over 40 books, including George Washington’s Final Battle: The Epic Struggle to Build a Capital City and Nation (Georgetown University Press, 2021). 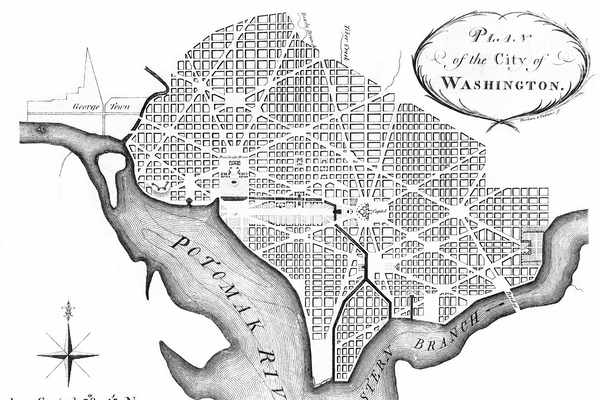 Andrew Ellicott's update of L'Enfant's plan for the capital city, 1792

We now find ourselves more divided than any time since the Civil War. As we endeavor to heal the deep cultural rifts and renew a sense of political unity, we would do well to consider a moment in history.

Against all odds, George Washington and a ragtag band of poorly trained blacksmiths and ill-equipped farmers managed to pull off a most unlikely victory in the Revolutionary War. While the cessation of military operations in 1783 brought a long-awaited peace to the former colonies and freedom from the Crown, the struggle for independence was not over. Far from it. For the colonists, it would not be a simple matter of transitioning from soldier to citizen or from revolutionary to American. Rather, the civic vacuum created by the end of British rule posed a number of immediate and daunting challenges, most of which the fledgling nation was ill prepared to address. The question on everyone’s mind was, most assuredly, “What happens next?”

Indeed, the incipient enterprise of popular government was on shaky ground—bitterly divided, deeply in debt, and her citizens and the new states distrustful of one another. Paralyzed by a weak and ineffectual system of governance, the new republic was unable even to levy taxes or pay its veterans. It was apparent that it might be harder to run a constitution than it had been to frame one or even to win the war for the right to do so.

Within that context, the story of the Constitutional Convention and struggle to establish a new government is, of course, well known. However, there was another Founding debate that also shaped the nation in profound ways, but it is often omitted from the pages of textbooks and generally taken for granted by the American public—that would be the question about a capital city and the ensuing debates about its location, design, and size. Ironically, this issue often proved just as contentious for the Founders and nearly tore the young republic apart; yet, its resolution would help to unify and strengthen the nascent government and nation.

Indeed, creating an entirely new system of government that worked would be a precarious undertaking; doing so without a capital would be a long shot. Shockingly, the upstart colonists had announced their independence, fought a long war, then framed a constitution, all without a capital city or even a plan for a permanent seat of government. It was hardly the way to assure that the enterprise would work. And it would be just over a quarter-century from the first shot of the war until John Adams moved into the permanent capital.

The idea of a capital had been debated since the start of the war, but with little progress. For instance, the Continental Congress moved from one temporary capital to another. Needless to say, the inability to agree on a location from which to lead a revolution was a major embarrassment and nearly undermined the cause of liberty. In subsequent years, vote after vote failed to reach agreement about a site for the seat of government. Lacking a capital city, the new political experiment was a nation in name only. Therefore, the capital’s location and design would have important consequences not only for the host city’s economy, the future of slavery, and ability to govern, but perhaps most importantly, it would determine the type of nation the United States would become. In short, it would be the physical home of the new nation, but much more—the capital would be a laboratory for democracy.

After the long revolutionary struggle, General Washington was looking forward to domestic tranquility, but his work was not complete. Upset by the growing divisions, Washington would embrace an idea that would help strengthen the nation—a permanent capital city. Building an entirely new capital city, much less from “scratch” and out of the “wilderness,” was an undertaking fraught with difficulties. It was a novel and audacious, if not wholly unpractical plan. Yet, Washington had emerged from the Revolution as the nation’s most revered citizen. It was he—nearly as much as the vague and untested ideals of self-government and liberty—that inspired the people and held the divided country together. He would now need every bit of his considerable esteem for the task.

Washington’s vision was for a glorious “city for the ages,” a home for an energetic and stable federal government, one that would unite the north and south by being located in the geographic center of the country, imbue the people with something they lacked—a sense of nationhood—forge an American identity, while also giving America credibility in the eyes of Europe. It would help facilitate a “political culture” of democracy and both reflect and host the lofty ideals of self-government. In doing so, Washington hoped the building of a permanent capital would help heal the political deep and growing rifts forming in the fabric of American society and move the nation toward a renewal of the spirit of the revolution. Indeed, he faced challenges, including some we’d recognize today. Animosities were growing between north and south as well as those living along the eastern seaboard and their brethren in the frontier. The states were bickering and political factions were forming that further polarized debate. Referred to by scholars as “the critical period” in the nation’s history, the 1780s would be the decade that determined if the United States would long endure.

Washington proceeded to build support for his vision, identified the location, hired architects and recruited builders and tradesmen, then oversaw construction. It was not always pretty. He had to contend with parochial interests that opposed any site for the capital other than one in their home state, convince land owners in the area to sell their property, and constantly soothe tensions among the squabbling factions. Although he did not enjoy politics, the struggle over the capital Washington revealed his skill as a gifted political dealmaker who was not above wallowing in the political mud or twisting arms for votes. When necessary, the president proved to be quite effective lobbying members of Congress and, conscious of his charisma and enormous popularity, bringing the full weight of his reputation to bear on an issue.

To be sure, Washington is frequently, though inaccurately, depicted as a leader who never entered a political or partisan fray. In the words of Pulitzer Prize-winning Washington biographer Ron Chernow, “sometimes it’s portrayed that George Washington somehow floated above the fray, that he was a figurehead and that Hamilton was running it. Not at all. Washington was absolutely on top of everything that was going on.”

Washington knew when to stand back and let events play out to his advantage. As has been said about Dwight Eisenhower, his could be a “hidden-hand” presidency. He surrounded himself with highly capable aides he trusted and let them act, a management style deemed essential by scholars of the presidency. At other times, like Theodore Roosevelt or Harry Truman, he knew when to act unilaterally and with expediency and force. Like George H. W. Bush, Bill Clinton, and Barack Obama, he took much personal interest in the details of the issue at hand.

Washington’s fingerprints would be on nearly every decision and detail involving the development of a capital city. It was apparent to members of Congress, one of whom noted that the project “more than anything else had his attention.” It became a near obsession for him, consuming his energy and attention such that one of his colleagues quipped that the president, “scarcely could have found the future seat of government more time-consuming.”

Ultimately, Washington’s vision prevailed and, in doing so, gave the nascent republic a chance. There are lessons in how Washington achieved what would be one of his lasting legacies—the city that bears his name and has housed the government ever since. The great Founder understood that democracy demanded compromise and cooperation. He sought consensus whenever possible. He was keenly aware that his every action and every word would have meaning, and therefore held himself to a high standard of honesty and civility. Even during the most divisive debates, he never put loyalty to “faction” (party) above the Constitution and nation.