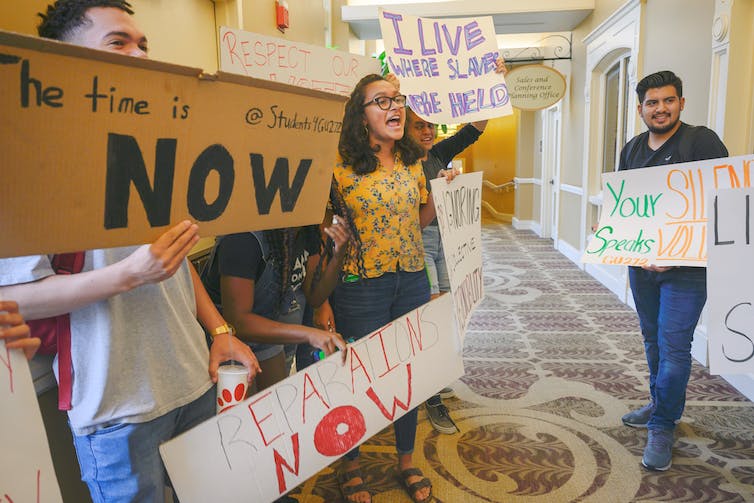 Colleges and universities across the U.S. have been taking a hard look at their ties to slavery.

This isn’t an entirely new phenomenon. Back in 2006, Brown University published a report showing that the university – from its construction to its endowment – participated in and benefited from the slave trade and slavery.

And since then, several other colleges and universities have disclosed their ties to the use of slave labor.

For instance, Johns Hopkins University – whose namesake and founder has historically been portrayed as an abolitionist – reported in December 2020 that its founder actually employed four enslaved individuals in his Baltimore household.

At the University of Mississippi, a slavery research group has found that at least 11 enslaved people labored on the campus.

At Georgetown University, officials disclosed in 2016 that one of its presidents – Thomas Mulledy – sold 272 enslaved men, women and children in 1838 to save the university from bankruptcy. The revelation sparked an effort to track down descendants of the people and to atone by offering preferential admission – but not scholarships – for them to study at Georgetown.

Georgetown University has since committed to raising $400,000 a year for reparations to help the living descendants of enslaved people sold by the school’s president in 1838. But some students have criticized the plan as not going far enough. Meanwhile, implementation has apparently stalled.

Many universities benefited from slavery, and there has been a growing discussion about what, if anything, universities owe to the descendants of the people they enslaved and what they can do to atone.

In Virginia, for example, the Virginia House approved a bill to require five state universities founded before 1865 to offer economic assistance and four-year scholarships to descendants of enslaved people who labored on the campuses. The Virginia Senate has yet to take up the measure, known as HB 1980.

From my vantage point as a historian of slavery, capitalism and racial inequality, the issue goes beyond whatever “connections” U.S. colleges and universities have had to slavery. Even after slavery, these schools continued to oppress Black people by not allowing them to enroll as students.

The University of Virginia graduated its first Black undergraduate, Robert Bland, in 1959.

Yet admission to traditionally white universities is one piece of the higher education puzzle. Historically Black colleges and universities, commonly known as HBCUs, continue to have an outsize role in ensuring African American upward mobility through higher education. Even though the nation’s 100 or so HBCUs represent less than 3% of the nation’s 4,360 colleges and universities, they graduated 13% of Black undergraduate college students nationally in the 2017-2018 school year.

And the institutions that tend to enroll higher proportions of historically underrepresented groups – including African Americans – also tend to be the least well funded. That matters because students who attend better-funded colleges tend to graduate at higher rates.

The disparities transcend higher education. White families, on average, tend to have 10 times the wealth of Black families. That gap is likely to grow in part because the racial wage gap is expanding.

Universities are beginning to put resources toward efforts to atone for their roles in slavery.

St. Mary’s College of Maryland has built the first memorial to enslaved people of Southern Maryland on its campus. I spoke with St. Mary’s history professor Garrey Dennie, who says that the college is building “a curriculum that is attentive to the experiences of African Americans both in the present and in the past” as part of an effort to right past wrongs.

Yet scholars and economists studying racial economic inequality, such as William A. Darity Jr., point to the need for federal action. This action could range from economic reparations and endowment-building at HBCUs to debt forgiveness for Black students.

As colleges and universities continue to examine how they benefited from slavery and shut out African Americans from their campuses for a century after slavery was abolished, reparations only to the descendants of those who were enslaved by agents of a particular college might be just one part of the equation.

To eliminate the educational disparities that they helped uphold after slavery, former slaveholding colleges must, I believe, address inequality on a much broader level. At the heart of the matter is the extent to which Black Americans can afford to pay schools that once paid nothing for the labor of the people they enslaved.