Janette Greenwood is Professor of History at Clark University. 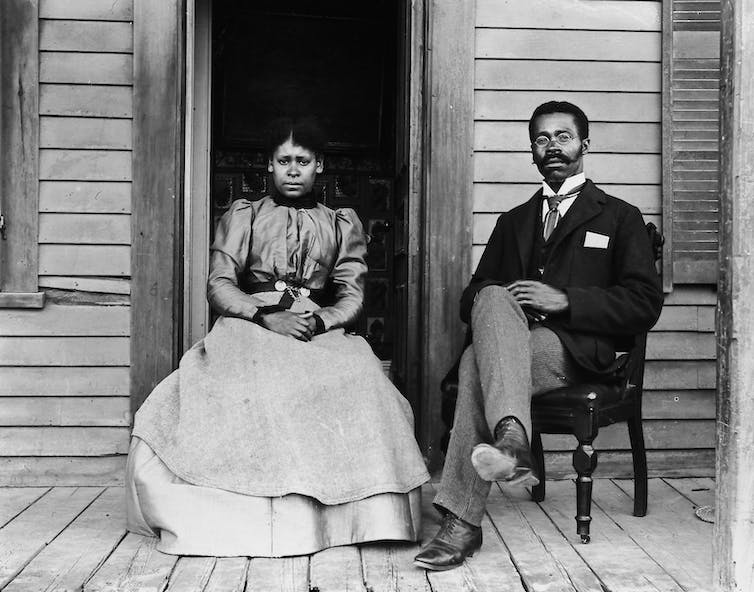 Portrait of Betty and Willis Coles by William Bullard from about 1902. Courtesy of Frank Morrill, Clark University and the Worcester Art Museum

Unstable. Criminal. Impoverished. Absentee fathers. Neglectful mothers. “A tangle of pathology,” as the Moynihan Report, a 1965 study on Black poverty, put it.

For decades, the Black family has been denigrated as dysfunctional.

When mass media exploded in the late 19th century, degrading images of Black Americans – as inferior, clownish and dangerous – saturated nearly every aspect of popular culture, from music to advertising.

The evolution of radio, film and television in the 20th century only amplified demeaning images, providing “proof” to white Americans of Black inferiority and a justification for denying them their rights.

Today, many of these same tired images persist and continue to feed baseless perceptions. A 2017 study showed that the news media continue to “inaccurately portray Black families as more poor, criminal and unstable than white families.”

When those malicious images first started to proliferate, Black Americans found an especially effective way to resist. They seized upon the camera to represent themselves, using photographs to depict who they really were. Seemingly a “magical instrument” for “the displaced and marginalized,” as critic bell hooks writes, the camera provided “immediate intervention” to counter the injurious images used to deny them their rightful place in American society.

A record of everyday Black Americans

In 2013, a historian and collector named Frank Morrill, who lives in Charlton, a suburb of Worcester, Massachusetts, discovered over 230 portraits of people of color among the 5,300 glass negatives of photographer William Bullard that he owns.

Along with Morrill and my history students at Clark University, I researched these portraits and co-curated an exhibition at the Worcester Art Museum featuring 83 of Bullard’s portraits.

I was drawn to these portraits because they illustrate the ways that ordinary, working-class families used the camera to represent themselves in their full humanity.

Bullard, a white neighbor of most of the people he photographed in Worcester, made these portraits from 1897 to 1917. Their images defy stereotypes of dysfunction by portraying the vitality of Black family life just a few decades after emancipation.

As Bullard was making his portraits, sociologist and civil rights activist W.E.B. Du Bois was curating a photographic exhibition for the 1900 Paris Exposition. Du Bois sought to showcase Black achievement to the rest of the world, and his images featured middle-class and elite Black Americans, often in a studio setting and without specific identification.

Bullard’s portraits, on the other hand, are extraordinary because they capture common people on their porches, backyards and parlors. Moreover, most of the families can be identified, allowing their stories to be told.

Symbols of resilience and aspiration

The existence of these family units was an achievement in its own right.

At the time Bullard made his portraits, slavery and family separations remained a traumatic memory for many of his subjects. As a result, family portraits were especially significant. They testified to the achievements and aspirations of Black Americans and the resilience of their kinship networks.

And for a people whose history had so often been obliterated, the photographs provided an opportunity to preserve their stories for future generations.

In 1900, Rose, Edward and Abraham Perkins posed for Bullard in their Worcester backyard. Born into slavery in South Carolina, the three siblings and other family members had settled on former plantation land that Edward managed to purchase only a few years after emancipation. 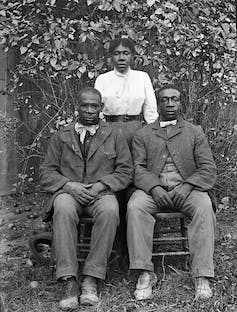 Rose Perkins and her brothers photographed by William Bullard, about 1900. Courtesy of Frank Morrill, Clark University and the Worcester Art Museum.

But their dream of life as independent farmers ended with the demise of Reconstruction. A backlash of terror against the state’s Black population once again ushered in the rule of white supremacists.

Caught in the vice of declining cotton prices and an economic depression, Edward lost his land. With their hopes for new lives in the South demolished, Edward and his wife Celia made the decision to seek a more complete freedom in the North. They made their way to Worcester in 1879; soon Rose, Abraham and many other family members followed.

As refugees of terrorism and economic disaster, the siblings, in their portrait, embody triumph and perseverance, and commemorate the tenacity of family ties that stayed intact through slavery, emancipation and migration.

Other photos portray flourishing young families claiming their place in American society. The subjects present themselves as ordinary, upstanding Americans who share the same values, tastes and aspirations as their contemporaries.

In 1904, Thomas, a Virginia native, and Margaret Dillon, born near Boston, posed with their three children in the parlor of their home. Legs crossed and hands in the pockets of a stylish suit, Thomas appears as a proud patriarch. Margaret, with a smile on her face and her luxuriant skirt cascading to the floor, radiates maternal love and decorum. She holds their baby as two older, well-dressed children stand between mother and father.

Flowered wallpaper, lace curtains and framed paintings signify a well-appointed home. A poster on the wall commemorates President Theodore Roosevelt’s visit to the city in 1902, suggesting the family’s engagement in politics and local affairs. 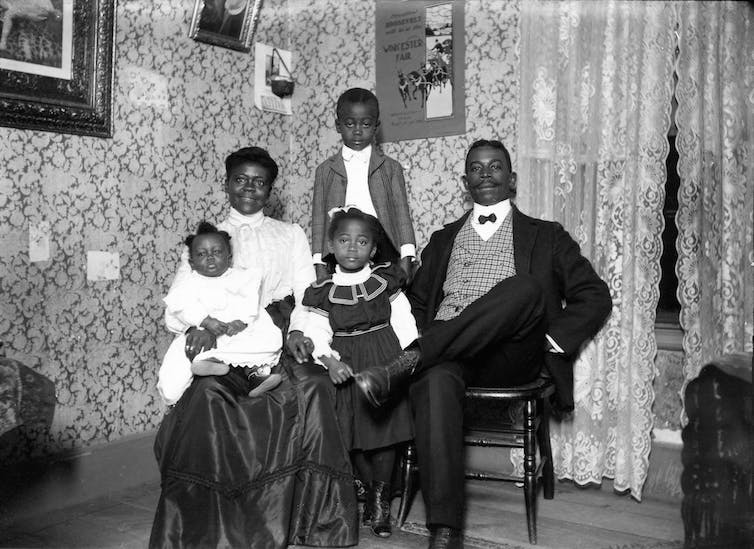 Thomas A. Dillon and Margaret Dillon family, photographed by William Bullard, about 1903. Courtesy of Frank Morrill, Clark University and the Worcester Art Museum

In this tableau of respectability and stability, the Dillons defy nearly every stereotype of the dysfunctional Black family. Although they labored for white families – Thomas as a coachman and Margaret as a domestic servant – and had yet to achieve middle-class security, their portrait brims with aspiration.

When the Dillons and others posed for Bullard, lynchings of Black men were spiking in the U.S. The brutish “Black beast rapist” – an archetype invented in the white South during Reconstruction – often served as justification for these murders. Postcards of lynchings were widely circulated, along with “humorous” postcards and cartoons featuring Black men stealing chickens and watermelons.

In the midst of this attack on Black manhood, some families centered their portraits on fathers and children. Around 1904, Raymond Schuyler, a railroad worker originally from upstate New York, had his portrait made with his four children in a snow-covered park. Playfully sitting on a child’s sled, with his arms encircling one of his young daughters, Schuyler personifies a benevolent, gentle masculinity. 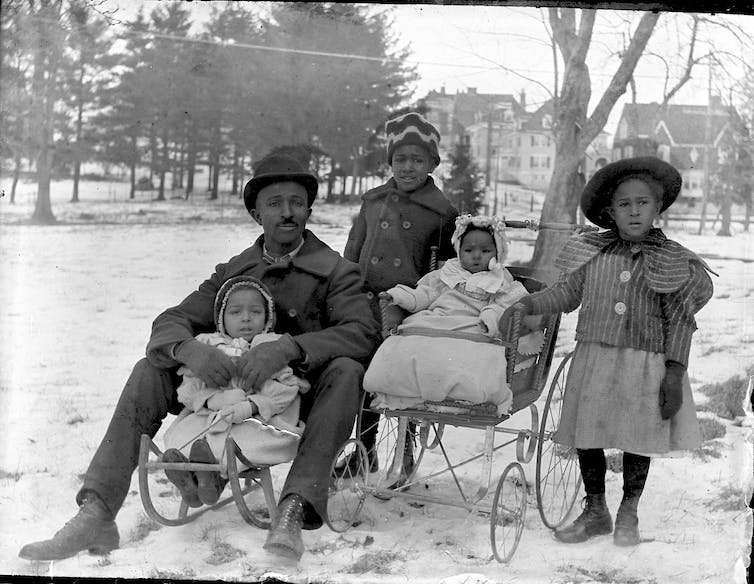 Raymond Schuyler and four of his children, photographed by William Bullard in about 1904. Courtesy of Frank Morrill, Clark University and the Worcester Art Museum

In another image, a father poses with his baby on his lap, his large hands securely holding his child. He wears the uniform of the Knights of Pythias, a fraternal organization that espouses the values of responsibility, community and family.

The quiet resistance of the family photograph

As Black men battled claims of their inherent criminality, Black women fought a dualistic stereotype – that of the promiscuous “Jezebel” or servile “Mammy.” Black women fought these images by presenting themselves with respectability and decorum. 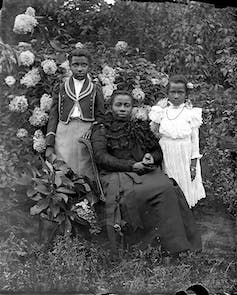 Jennie Bradley Johnson and her daughters, photographed by William Bullard around 1901. Courtesy of Frank Morrill, Clark University and the Worcester Art Museum.

Take Jennie Bradley Johnson, who posed with her two stylishly dressed daughters, May and Jennie. Seated in a lush garden, surrounded by hydrangeas, Johnson conveys maternal warmth and modesty. Recently widowed and facing the burden of raising her family alone on a laundress’s wages, she nevertheless projects strength and endurance in the face of loss.

Historical portraits provide an invaluable means to enter the distant past. And other photographers have continued the tradition.

In 2017, photographer Zun Lee unveiled his exhibition “Fade Resistance,” made up of “orphaned” Polaroids from the 20th century that Lee discovered at yard sales and on eBay. The Black Americans in the photographs pose proudly with their cars, dress up for Easter and play with their kids.

Like Bullard’s portraits, Lee’s found family images are, as Lee wrote, a reminder that “there is a vivid history of Black visual self-representation that offers an eerily contemporary counter-narrative to mainstream distortion and erasure.”

Demonstrating the chasm between stereotype and reality, these Black family portraits reveal the ways in which ordinary hard-working Black families have long been rendered invisible in mainstream American culture. They reveal the common goals shared by all American families: the desire for stability and security, and the chance to nurture and support children so that they can have a better future.