Mars Perseverance and the King's Bay Plowshares: A Study in Priorities 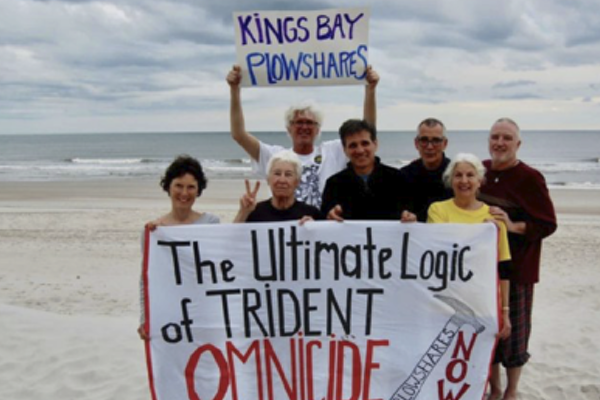 I won, I thought, often.  Bobby Allan and I in Ms. Cooke’s fifth grade “show and tell” vied for attention with our astronaut scrapbooks.  New York in 1962 had six daily newspapers plus Life and Look magazines, all with color spreads after space flights and available at the nearby newsstand of Manny’s Candy Store.  Scissors sharpened, I gathered and clipped first editions.  Letters to NASA brought still more details.  When I put aside thoughts of running for President, I presumed I might go into space.

The Perseverance Rover’s presence on Mars kindles memories but “the thrill is gone,” as BB King sang of a soured romance.  My adult awareness of others’ suffering transcends childhood’s sense of adventure as the spacecraft’s $2.7 billion, 293 million-mile trip checks “different types of rocks such as clays and carbonates to determine whether they contain traces of ancient microbial life,” as Forbes reports.

The Hunts Point Produce strike settlement, hailed as a triumph in January, won little, an hourly raise of $1.85 an hour over three years; eighty-five undocumented immigrants now on hunger strike at Judson Memorial Church in Manhattan’s Greenwich Village are starving themselves to highlight the plight of 274,000 unemployed workers excluded from federal and state pandemic relief programs.

“Never before has man had such capacity to control his own environment, to end thirst and hunger, to conquer poverty and disease, to banish illiteracy and massive human misery,” President Kennedy told the United Nations General Assembly on September 20, 1963.  He had grown from harsh Cold Warrior to coexistence crusader, having one month before espoused peaceful coexistence with the Soviet Union.  A Dallas gunman killed him two months later.

One wonders what might have been had he lived.  Instead, how much has changed?

“There were 55,915 homeless people, including 17,645 children, sleeping each night in the New York City municipal shelter system in January,” the Coalition for the Homeless reveals.  City Harvest adds that 1.5 million New Yorkers of whom 466,000 are children deal daily with food insecurity – 38% and 39% growth, respectively, over pre-pandemic figures.

The National Defense Authorization Act 2020 sailed through Congress, meanwhile, to expend $2 billion daily, according to the Friends Committee on National Legislation, for weapons systems, 800 overseas bases, and our entanglements in Afghanistan and Iraq.

“In the councils of government, we must guard against the acquisition of unwarranted influence, whether sought or unsought, by a military-industrial complex, President Eisenhower’s 1961 Farewell Address warned.  Now that complex wreaks an invisible war against at-risk Americans.

These issues are old, as I am, but the post-9/11 provision of war weapons to urban police departments that an FBI inquiry found have been infiltrated by white supremacists prompted frequent and severe uncalled for police violence against people of color.  The claim that holds “a few bad apples” at fault for the five-year death sequence that NYPD Officer Daniel Pantaleo launched with his chokehold on Eric Garner is disproved by what we know has happened and the lack of mandatory reporting for police use-of-force statistics.

“The incidence of wrongful use of force by police is unknown,” the National Institute of Justice and Bureau of Justice Statistics wrote in October 1999.  “Research is critically needed to determine reliably, vividly and precisely how often transgressions occur.”  The FBI’s National Use of Force Data Collection has had voluntary participation by federal, state and tribal law enforcement groups representing 41% of the nation’s sworn officers since its July 2019 origin.

Bobby Allan and I in fifth grade thought our generation would solve problems like these.

Coming of age in the civil rights and Vietnam War eras convinced us it could.  High school peers and I chipped in for a bus to and from the November 1969 Moratorium at the Washington Monument and my service as a US Senate aide and Peace Corps Volunteer stemmed from ideals.  Watching “Blue Bloods” on television recalls my change advocacy while chairing the NYPD Training Advisory Council’s Race Subcommittee and that institution’s rigid resistance.

Pablo Picasso’s 1938 Guernica mural speaks to me as its stark blue, black and white imagery shows the perpetual struggle of good and evil.  Even incremental change requires extreme effort, it seems in our time, as bureaucratic growth divides leaders from constituents and fewer people possess the nation’s vast wealth.  In 1983 I could question Congressman Stephen Solarz in person for his vote to fund President Reagan’s Nicaraguan Contra War; in 2019 Congressman Jerry Nadler’s New York scheduler – after I had filled out his required online contact box, sent letters, then called his Washington, Brooklyn and Manhattan offices – said “he’s too busy” to see me at any time.

“Be the change you want to see in the world,” Gandhi said.  I have his quote on a tee shirt that hung in my history classrooms through my 19-year teaching career.  Perhaps that is the best I can do as at age 68 I write from my living room corner about what I see through my window and the lens of experience about national and neighborhood life.

The Kings Bay Plowshares poured vials of their blood, damaged a missile and spray-painted “Love One Another” on a sidewalk at the nuclear submarine base they entered in Georgia.  Because we value property over people, and are governed by leaders who function from fear, the seven, who deserve a parade, are in jail.  The Navy’s 14 Trident submarines can each launch 24 nuclear missiles and a $58.2 million order placed last year has more on the way.

Is this to defend us or to dominate as we say Russia and China intend?

We should instead address our internal enemies, homelessness and hunger to start.

Our nation with democracy intact would be well worth defending.  It might cost less than our weapons and make policing unnecessary.

The Perseverance Rover seeks Martian evidence of ancient microbial life.  Shouldn’t we figure out how to live better on earth