William Lambers is an author who partnered with the UN World Food Program on the book Ending World Hunger, His writings have been published by the Washington Post, History News Network, Newsweek and many other news outlets. 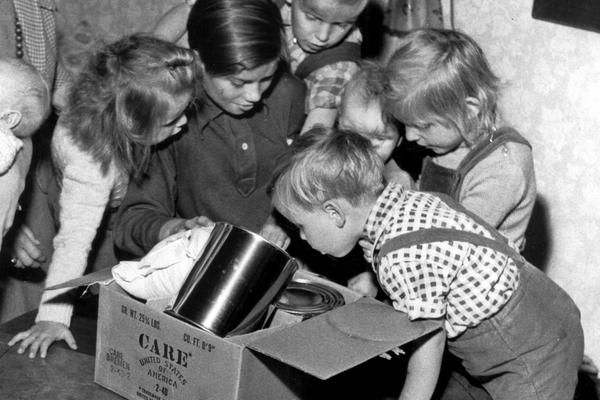 It was 75 years ago this May when the first CARE packages of food began arriving in Europe to feed the hungry. This new charity, know then Co-operative for American Remittances to Europe (CARE), represented the very best of America.

At first using Army surplus rations in Germany, CARE started giving boxes of food to the hungry in Europe. Just a year after World War II, Europeans were suffering because of severe food shortages. The destruction from the war and also harsh weather had left Europe in ruins and unable to produce enough food.

Through CARE, American citizens could donate and help European families through difficult post war years. Every CARE package was food and hope for a continent on the doorstep of famine.

General Lucius Clay, who headed the American forces in Germany, pleaded for CARE packages for the hungry. Clay wrote, “When a CARE package arrived the consumer knew it was aid from America and that even the bitterness of war had not destroyed our compassion for suffering.”

In America newspapers had ads showing how to buy a CARE package to send overseas to a hungry family in Europe. Or you might head to a store and buy one. You could select a general family package or even one geared specifically to infants to fight child malnutrition.

In Cincinnati, Ohio Siegfried Deutsch bought 35 CARE packages. For Deutsch these packages had extra meaning because he was from Austria, where CARE packages were sent to relieve food shortages.  The Cincinnati Enquirer reported that one of Deutsch's CARE packages went to a mother and her young daughter in Vienna, Austria.

Also in Cincinnati a WWI veteran, Victor Heintz, walked into a store and bought a CARE package to send to France. Heintz had fought in France during WWI. Now he was still able to help France through CARE food packages.

President Truman addressed the nation while donating CARE packages himself. During the holidays of 1947 Americans set aside an empty plate at dinner representing a "silent guest," one of Europe's hungry. Families would then donate to feed that "silent guest" and this led to  CARE packages of food being sent to Europe. President Eisenhower had CARE packages sent to Europe his first Christmas in office through Operation Reindeer (Santa Claus).

While CARE originally helped feed Europe, it has since expanded operations to Africa, Asia and other areas in need with a wide range of humanitarian programs.  One of CARE’s biggest programs during the Eisenhower and Kennedy years was bringing school meals to hungry children throughout the world.

Now 75 years after its start, CARE is on the front lines of the biggest hunger crisis since the WWII era. Famine is threatening multiple nations including Yemen, South Sudan, Madagascar and the Democratic Republic of the Congo.

CARE, along with a group of charities, calls for world leaders to dedicate at least one day’s worth of military spending toward food aid.  There should be more resources to fight hunger. There should be less resources for heavy armaments and more for programs like infant feeding and the McGovern-Dole global school meals program.

We need more CARE and compassion toward those who are suffering in hunger today around the globe. CARE and its partner charities on the front lines are working every day to bring relief to those in need. We should do everything possible to support them during this time of a global pandemic and severe hunger crisis.