As Americans Hit the Road Again, It's Time to Revisit the Ideals of Liberty

Heidi M. Ravven is Professor of Classical & Religious Studies at Hamilton College, and is the author of The Self Beyond Itself: An Alternative History of Ethics, the New Brain Sciences, and the Myth of Free Will, The New Press: 2013. 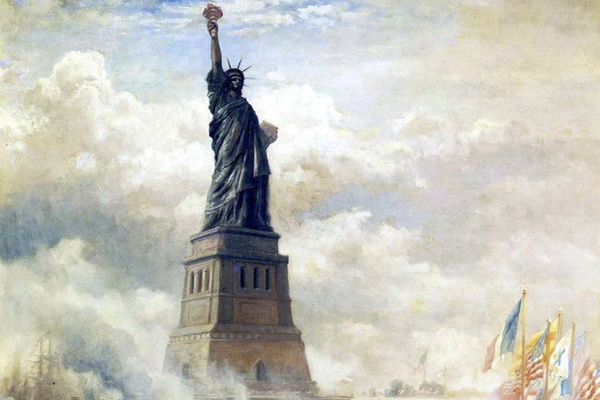 Unveiling of the Statue of Liberty Enlightening the World (1886) by Edward Moran. The J. Clarence Davies Collection, Museum of the City of New York.

Now that COVID immunization has reached a sizable percentage of the population, we Americans are enthusiastically traveling again, especially within the boundaries of our country where the risk of infection is lower. After more than a year of confinement, many of us are heading to national parks, monuments, and historical sites to create experiences that may link our children to both family and national memories.  Standing on the rim of the Grand Canyon or at the door of Independence Hall, we can be united in spirit as Americans by these historical and natural wonders.

With the official inauguration this year on July 14, Bastille Day, of a miniature Statue of Liberty at the French ambassador’s home in Washington, D.C., perhaps a perfect place to start is the Statue of Liberty in New York’s harbor. Most visitors easily imagine desperate immigrants arriving by ship and viewing the statue. We see Lady Liberty through the eyes of those who arrived believing America to be The Promised Land, a refuge for the persecuted and beleaguered of many lands.  Far fewer may consider what historians tell us, that the statue was designed as a tribute by French Abolitionists to the Civil War’s emancipation of slaves and as a symbol of freedom from both slavery and oppression.

Slavery's broken chains beneath Lady Liberty's feet were in initial drawings more conspicuously held in her hand. The tablet she holds has the date July 4th, 1776, in Roman numerals, inscribed on it, linking Emancipation to the ideals of the Declaration of Independence.  Emma Lazarus's famous poem, The New Colossus, inscribed on the statue's pedestal in 1903, added asylum for oppressed immigrants to the meaning of American Freedom. The poem’s “Give me your tired, your poor, your huddled masses” are familiar words referencing the refugees and immigrants who have come to this country.

So the intertwining of images of freedom from American slavery and freedom from foreign oppressors mixed with the original independence from colonial tyranny expands the meaning of freedom. The images of who symbolized American freedom include equally African Americans and immigrants from foreign shores, while still harking back to the ideals of the Anglo-American founders.  When the Statue of Liberty was dedicated in 1886, America was becoming, in ideal if not in full fruition, a pluralist and immigrant country.

Visitors may now observe how Lady Liberty integrates the Emancipation of African American slaves and the rescue of immigrants escaping oppressive foreign regimes, with American independence from British tyranny.  These three monumental movements in our country’s history become one in our minds, shaping our national memories and informing our American identity.  The statue represents the vitality as well as endurance of the founding ideals of the Declaration of Independence, that they have continued to live in American culture and can be creatively interpreted to inspire us anew.

The Statue of Liberty faces outward, pointing to the world beyond rather than inward to America alone.  She unites past and present, America rediscovering her ideals and also looking toward the international community.  She's the perfect place to restart our travels this year here and abroad.