The Missed Lesson of Vietnam: Plan for Unconditional Victory or Don't Intervene at All 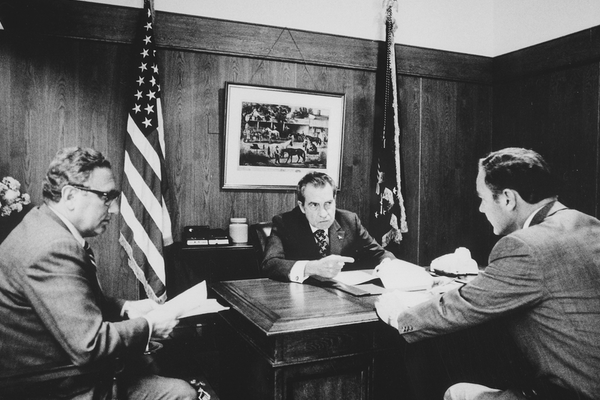 There have been any number of pundits comparing the fall of Saigon in 1975 to the horrors we are witnessing as the United States withdraws from Afghanistan. Events in Afghanistan are far worse, some argue; at least in Vietnam there was a “decent interval” between the Peace Accords signed in January 1973 and the collapse of South Vietnam in April 1975.

All of this misses the point. Both situations prove the folly of starting a war where there is little likelihood of unconditional surrender. History screams this lesson, and the United States in its delusional belief in its vast military power continues to fall into the trap that somehow this time will be different.

“Vietnamization” did not work any better than attempts by the United States to put the Afghan government and its military on their feet after the American invasion in October 2001. The chaotic end to both long wars was predestined from the first days of the conflicts. Unless an invading nation can impose its terms after an unconditional surrender, as seen at the end of the Second World War with Germany and Japan, the result will be the predictable loss of public support for the war and a withdrawal that leaves the situation in chaos.

Even the end of the First World War illustrates this problem. After four years of brutal war, the parties stopped fighting under the terms of an Armistice brokered in large part by the United States. The war had been a draw—there were no clear winners and no clear losers. But the peace treaty put the blame on Germany and a weak democratic government was installed, known as the Weimar Republic. After a brief time and intense disorder and fighting in the streets of Germany, the Nazis rose to power, arguing the peace treaty was “a stab in the back,” and a second even more catastrophic world war followed a 20-year interregnum.

In Vietnam, the key architects of the end of the war, Richard Nixon and Henry Kissinger, knew that the peace they were forcing on South Vietnam was highly unlikely to last and that President Thieu of South Vietnam was doomed by the very terms Kissinger was negotiating in Paris with the North Vietnamese Special Advisor, Le Duc Tho.

Looking back, the terms seemed almost ridiculous: leave the Vietcong in place in the South, remove the Americans, hold supposed free elections to reunite the country, and allow material to continue to pass through the demilitarized zone (DMZ). Worse, the United States had to agree to pay billions of dollars to North Vietnam to help it rebuild after years of war (euphemistically referred to in the peace accords as “healing the wounds of war and postwar reconstruction”).

In one of the more instructive Nixon tapes, Nixon and Kissinger spoke just days into the new year of 1973 in the Oval Office about the inevitability of the fall of South Vietnam. Two options were under consideration: Option One (peace now) and Option Two (continued bombing for return of POWs).

“Look, let’s face it,” Nixon told Kissinger, “I think there is a very good chance that either one could well sink South Vietnam.”

Nixon said he had responsibilities “far beyond” Vietnam alone and that he could not allow “Vietnam to continue to blank out our vision with regard to the rest of the world.” He spoke of his efforts at détente with the Russians and his recent opening of China.

And while the options both carried great risks, Nixon knew the American public wanted out and even a bad result was better than continuing.  He had trouble even verbalizing the concept given how painful the reality was to him. “In other words,” he told Kissinger, “there comes a point when, not defeat—because that isn’t really what we are talking about, fortunately, in a sense—but where an end which is not too satisfactory, in fact is unsatisfactory, is a hellava lot better then continuing. That’s really what it comes down to.”

Kissinger responded that if President Thieu’s government fell, it would be “his own fault.”

There is a unique humiliation brought down on a warring superpower like the United States when the enemy combatants know they can outlast public opinion in America. The North Vietnamese correctly read the results of the national election in the U. S. in November 1972. Yes, President Nixon won in a landslide; but in Congress Democrats held onto their majorities in the House and the Senate. In fact, the Democrats gained six seats in the Senate—one being a freshman from Delaware named Joe Biden.

After that election, peace was no longer “at hand,” as Kissinger erroneously predicted. Instead the North Vietnamese dug in. Congress threatened to cut off all aid, military and otherwise, if Nixon did not end the war.

In Paris, Kissinger was rudely greeted with a request that the United States set a unilateral deadline for withdrawal. “North Vietnam’s sole reciprocal duty,” Kissinger sarcastically wrote, “would be not to shoot at our men as they boarded their ships and aircraft to depart.”

It took a massive bombing campaign in December 1972, the infamous “Christmas Bombings,” to finally exert enough pressure to obtain a peace agreement that was really nothing more than a veiled surrender.

We do not know what the future holds for Afghanistan. Predictions range from total disaster to perhaps, in time, normalization. Neither scenario is likely. Vietnam teaches us something. After 50,000 American dead and millions killed across the region, nearly fifty years later, Vietnam is on no one’s “axis of evil” list. Americans vacation there; trade is brisk between the two nations.

Korea, the one outlier to the rule that unconditional surrender is the only sure way to predict an outcome in war, actually proves the point given the incredible price the United States continues to pay in maintaining a military presence there—and all the United States and world have to show for this continuing commitment is a virtual madman in charge of North Korea who justifies an aggressive nuclear arms program because of the bogeyman of a continuing threat of war following an armistice that was signed nearly seventy years ago.

The lessons of the First World War, Vietnam and Afghanistan are plain: don’t overestimate American military power and don’t expect clean exits where it was predictable from the start that a long-term war was not winnable.