David P. Barash is professor emeritus, University of Washington and author, most recently, of Threats: Intimidation and its Discontents (Oxford University Press, 2020). 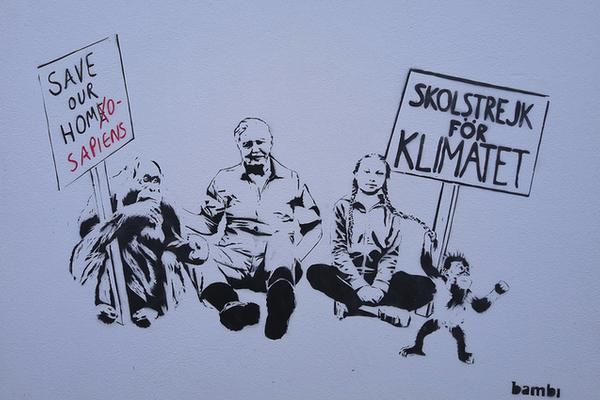 If you love this planet and its many life-forms, then perhaps you’ll agree that it’s time: time for the singers, song-writers, musicians, magicians, movie-makers, mimes, painters, poets, playwrights, sculptors, satirists, comedians, composers, clowns, dancers, novelists, tattoo artists, and anyone else with talent and inclination to connect with the emotional side of our human brains to step up and get to work.

Because it doesn’t take a weatherman to see that global climate change is happening and is an ongoing crisis. And it doesn’t take an ecologist to know that we’ve been coming dangerously close to destroying the organic infrastructure upon which all life — including ours — is built. Similarly, it doesn’t take a physicist or “defense intellectual” to recognize that nuclear war would be an unthinkable (but not unlikely) catastrophe. Nor do we need epidemiologists to tell us that pandemics are very bad news but that they can be ameliorated by vaccines, nor must we have political scientists to point to the growing risks to democracy, in the US and abroad. Ditto for economists and sociologists to clue us into rampaging inequality and racial disparities.

This is not to disparage the importance of expertise. We need that, too, and we have it. Certainly, we could use even more, but that’s not all we need. The problem is that empirical facts and technical insights simply aren’t enough. Cognition is wonderful, and, after all, we are supposed to be Homo sapiens (“the wise”). But pure wisdom, technical data, and appeal to the better angels of our nature, even insofar as those angels are rational and scientifically impeccable —and perhaps especially insofar as this is the case — have consistently fallen short.

Enter, let’s hope, those artists, myth-makers and story-tellers. We need a full court press, and that, in turn, requires touching that other part of human nature, the part that marches to an emotional drummer.

“If you want to build a ship,” wrote Antoine de Saint-Exupéry, “don’t drum up the men to gather wood, then divide up the work, and give orders. Instead, teach them to yearn for the vast and endless sea.” It’s that yearning, based on hope, fear, love, hate, lust, imagination, despair (whatever falls into the realm of the other-than-rational) that we urgently need. It has happened before, with some success, so there is some reason to expect that it could happen again, and perhaps, once again, with yet more success.

In the early 1960s, Physicians for Social Responsibility focused on the medical effects of the radioactive fallout that resulted from above-ground nuclear testing. The data were incontrovertible, and many people, including some politicians, were convinced of the need for a ban. It was, however, when the likes of Dr. Benjamin Spock (at the time America’s most revered pediatrician) pointed out that human breast milk was contaminated with radioactive iodine that the public became aroused, resulting in the Partial Test-Ban Treaty of 1963.

Data on the effects of nuclear war have long been clear, but what finally began to move public sentiment were movies such as On The Beach, Dr. Strangelove, Seven Days in May, and television dramas including The Day After. Following the end of the Cold War, antinuclear activism declined, and despite admirable work by the International Physicians for the Prevention of Nuclear War and the International Campaign to Abolish Nuclear Weapons (both Nobel Peace Prize winners), it still lags, awaiting appeals to our guts and not just our brains.

Wildlife conservationists have been criticized for paying outsized attention to the “charismatic megafauna” such as lions, tigers, polar bears, elephants, koalas, not to mention those adorable Giant Pandas. But it is these conspicuous species that tug most effectively at our heartstrings and accordingly, at our pocketbooks and politics. And don’t forget the whales. Indeed, the haunting songs of hump-backed whales not only birthed the Save the Whales movement, but — along with evocative best-sellers such as Silent Spring — provided impetus for the environmental movement more generally. The key, once again, is evocative: capable of generating a response, particularly an emotional one.

Today’s most desperate environmental crisis involves planetary climate change, notably global heating, a better phrase than global warming, since “warming” implies something cozy. Once again, the data are clear, but once again, numbers can be numbing. If pressed, I would trade a year of detailed, statistic-filled climatologic committee reports for a few more young, compelling activists like the teen-aged Greta Thunberg.

The power of emotional tugs has long been recognized by, for example, religious institutions, with their focus on awe-inspiring structures, compelling music, shared repetitive chanting, engagement with proclaimed mysteries, and often, threats of eternal punishment for sinners. Similarly, appeals to patriotism nearly always revolve around equating country with family, wrapped in a flag, marching to national anthems and a slew of comparable techniques aimed at emotion rather than cognition. Topping them off is typically a charismatic, demagogic, generally autocratic leader, who orchestrates thrilling mass rallies, manifested via Nuremberg in the 1930s or MAGA in recent times.

I’m a scientist and “numbers guy,” clueless about how to reach the other side of the public mind. So I’ll continue to raise alarms by doing what I can with research and nonfiction writing. But what I need — more to the point, what the world needs — is action where it really counts, from those skilled in purveying the magnetic push and pull of artistry, be it gut-wrenching or imagination-inspiring. So get going, guys. You have a world to save.