Portrait of the Artist as a Businesswoman: Dorothea Lange’s Lost San Francisco Years

Jasmin Darznik is a Professor of English and Creative Writing at the California College of the Arts. Her most recent book, The Bohemians, is a researched work of historical fiction based on the life and work of Dorothea Lange. 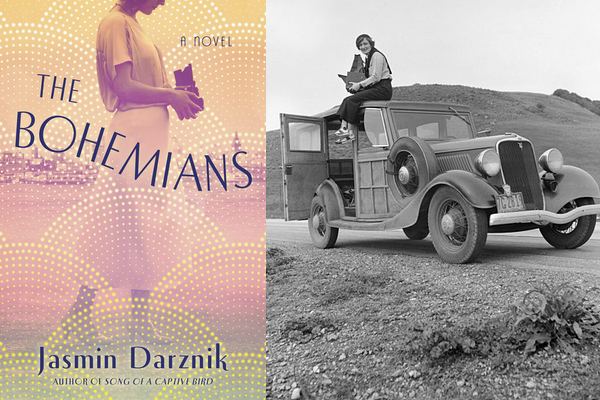 Before she journeyed onto the blighted streets and roadways of the Depression, before she took her iconic photograph “Migrant Mother,” before she became the renowned documentary photographer we know so well, Dorothea Lange was a society photographer in 1920s San Francisco.

“I was the one you went to if you could afford it,” she’d say later with a mix of pride and irony.

It seems like an impossible contradiction. How could a photographer so closely associated with the destitute have spent so many years catering to the fabulously wealthy?

Her childhood and family background offer some clues. Born in 1895, she’d grown up in Hoboken, New Jersey, the eldest child of first-generation, working-class German immigrants. At age seven, she fell ill with polio. Bedridden for months, she was left permanently disabled by the disease. When her father abandoned the family a few years later, her mother went to work first as a librarian and then social worker. The artist who’d give the world one of its most indelible images of motherhood was herself raised by a single mother. While her family was never destitute, from an early age she knew what it was to be lost, afraid, and alone.

After graduating from high school, her own course was seemingly set: she’d become a teacher, one of the handful of professions then open to women. Trouble was, she hated it—hated it enough to quit after her first day.

In short order she fashioned her own apprenticeship by seeking out successful portrait photographers in Manhattan, most notably Arnold Genthe and Clifford White. She did well enough, certainly better than her disapproving family had predicted she would, but by age twenty-three she was restless—and ready to leap.

Her dream was to travel the world. She made it as far as San Francisco. Upon arriving in the city in the spring of 1918, she was robbed of all her money, an event that would’ve sent most people running back home. Energetic and practical, unconquerable in spirit, she quickly rented a room at the Mary Elizabeth Inn, a boarding house for single women, and took a job at a five and dime shop on Market Street.

A little over a year later, she was running one of the most successful portrait studios in the city. By force of her wits and hard work, she set up shop at 540 Sutter Street, near Union Square, the city’s toniest shopping district, calling herself “Miss Lange.” She also called herself a “tradesman,” merging the figure of an artisan, manual laborer, and businessperson.

Bohemia entered in the form of Maynard Dixon. Nearly twenty years her senior, Dixon was a celebrated painter of the American West and a longtime habitué of the city’s artistic demimonde. “Bride Keeps Identity,” a San Francisco newspaper announced when they married in 1920, by which it was meant she intended to keep working after the wedding. It wasn’t exactly a choice. While Dixon lived out the Bohemian dream, she worked to support him and their two sons, conveniently liberating him from the onerous burden of commercial illustration so he could pursue his painting full time.

Lange doesn’t seem to have resented this—not at the beginning of their marriage, anyway. Portrait work suited her. She was justifiably proud of her success as a businesswoman. Nor did she see herself as in any way inferior to her clientele. As Linda Gordon notes in her excellent biography, Dorothea Lange: A Life Beyond Limits, Lange considered herself a kind of educator, enlightening her patrons about the then-new art of photography.

And for their part, many of her clients were progressive and open-minded. The Katten sisters, for instance, were formidable women—educated and energetic, with an appreciation for the arts as well as a strong sense of civic duty. Lange developed a genuine friendship with Edythe Katten that lasted all her life. Passionate lovers of art and culture, clients like the Kattens, Levi-Strausses, and de Youngs had built the city’s cultural institutions. A shrewd businesswoman, she made her studio into a site where artists and the liberal rich interacted.

“It never occurred to me,” Lange later said about this stage of her career, “to do uncommissioned work.”

The Dorothea Lange archive at the Oakland Museum of California includes photographs from these lost San Francisco years. Many have been digitized and are available to view online. Looking at this early work reveals a little-known side of Lange. She experimented with soft-focused imagery that can resemble graphite drawings or inky dark prints more than photographs. The portraits she made are slightly unconventional, and often quite beautiful, as well as timeless.

They also testify to her deep sense of empathy. Portrait photography relies, fundamentally, on a relationship—the relationship between the photographer and the subject. Lange knew, by instinct and experience, that her wealthy clients wanted to be seen as everyone wishes to be seen: as individuals. At her studio at 540 Sutter Street, she convinced them to let down their guard and allow themselves to be photographed with less formality than they were accustomed to. The Bohemian atmosphere of the studio—the velvet sofa, the antique samovar, the vases full of flowers—facilitated the process. She made house visit, as well, which was a somewhat common practice at the time and allowed her to gain even more of her clients’ confidence.

Modernism favored simplicity, a predilection the young Lange shared. She preferred that her clients wear informal clothing, rather than their finery, and many obliged. Her early portraits are imbued with a sense of interiority. Lange was an astute observer of gestures and the stories they suggested. Her subjects project what the critic Allan Sekula praises as her ability to show a “bodily expression of characteristic feeling.” She also had a gift for portraying relationships—mothers and children, siblings and cousins, grandparents and grandchildren. Her time as a portrait photographer developed all these strengths, leading her to the style for which she would be known and celebrated.

“San Francisco has lived two lives,” writes Dan Kurtzman in his book Disaster!—"one before the earthquake and fire, and one after.” The same could be said of Dorothea Lange. There was the apprentice she’d been before coming west, and the businesswoman she became after.

With the Depression, both she and her much-loved adopted home would undergo yet another transformation. Looking out of the window of her studio one day in 1932, she saw that the world was changing, profoundly and seemingly unalterably. Lange changed with it, eventually shuttering her business and dedicating herself to documenting the human crisis on the streets.

Although she eventually turned away from both the painterly experiments of her early years and the security that had come with owning her own studio, Lange came to appreciate these images as a record of her journey toward personal and creative maturity. “I really and seriously tried,” she said, “with every person I photographed, to reveal them as closely as I could.” Years of running her own business surely came in handy when dealing, as she often did during the 1930s-1940s, with churlish bosses and intransigent government officials.

Lange was part of the bright patchwork of new ideas and new people that spelled the spirit of San Francisco in the 1920s. Revisiting her photographs from these years and the circumstances in which they were created greatly expands our understanding of her aesthetic and political development and allows us to see the young Lange as a photographer who actively engaged in the lively mix of art and commerce of her day, and ultimately discovered her life’s calling through—not despite—that formative experience.