What Happens When the "End Times" are Now?

Martyn Whittock graduated in Politics from Bristol University UK, where his degree special study was in radical Christian politics and theology of the seventeenth century. He also studied the politics of the USA. He taught history for thirty-five years and latterly was curriculum leader for Spiritual, Moral, Social and Cultural education at a high school in the UK. He has acted as an historical consultant to the British National Trust organization, the BBC and English Heritage. His latest book is: The End Times, Again? which explores the impact of Christian end-times beliefs over 2000 years and their continued impact on outlook, culture and politics today. 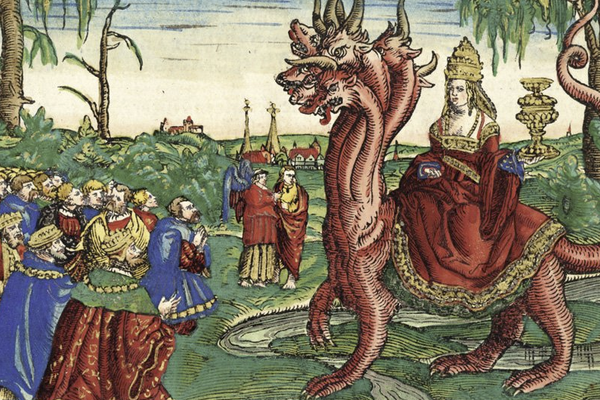 Illustration of the Whore of Babylon from Martin Luther's 1534 Translation

A rather revealing meeting

In June 2016, I organized a meeting for the local council of churches in an English town to discuss issues relating to the forthcoming European Union (EU) Referendum.  The meeting was intended to provide an opportunity for airing Christian views on the subject. It was well attended and drew in participants from across the wide denominational spectrum of churches.

The evening was lively. Many of my friends (regardless of whether they were ‘Leave’ or ‘Remain’ in the context of the EU Referendum) expressed astonishment afterwards at the way the discussion developed.

They had expected the topics to include debates over things like sovereignty and parliamentary accountability, jobs and economic prosperity, continent-wide cooperation in order to meet global challenges, or peace and security in Europe.

What they got was discussion ranging from the allegation that the seat 666 is kept empty in the European Parliament chamber in both Brussels and Strasbourg (it isn’t), to whether the EU is a political tool of Antichrist in advance of the second coming of Christ.

My friends were astonished at this. I wasn’t. During the previous month I had contributed a guest blog for a Christian news platform, challenging these same accusations. During that month (it went live on May 25, 2016) it had become, from my calculations, one of the most visited blogs on this website.

It can still be read online but, unfortunately, the huge string of comments and conversations under it can no longer be accessed. That is a pity because they would have provided interesting source material for future students of theology and the sociology of religion. Like the meeting I organized later, in June of that year, the online discussion got lively. In fact, it got very lively indeed! Some might say “heated.”

Eschatological turbulence on both sides of “the pond”

My experience in the UK was not the only turbulent event of 2016 that had end-times features to it. In November, something even more extraordinary occurred in the USA: the election of Donald Trump.

Somewhere in the region of 33 million white evangelicals voted for Trump and huge numbers of these see contemporary events through the same eschatological lens that had informed the outlook of those with whom I had debated in the UK about the European Union. In the US, this support has had significant effects on foreign policy.

President Trump’s decisions to move the US embassy to Jerusalem (announced in 2018) and to support Israeli sovereignty over the Golan Heights (announced in 2019) were designed to appeal to American evangelical Christians. Polling in the US in 2017 revealed that 80% of evangelicals believe that the creation of Israel in 1948 was a fulfilment of biblical prophecy that will bring about Christ’s second coming.

In addition, Trump’s decision to leave the Paris climate agreement in 2017 (the decision was implemented in 2020) sat easily with a group which contains many who deny the reality of climate change caused by human action, or do not consider it a threat which can be averted by human agency.

Whatever one feels about these geopolitical and environmental issues, it is undeniable that huge numbers of voters in the USA see these decisions through an end-times lens.

At this point, I should say that as well as being an historian, I attend a church in the UK which would be described as “evangelical.” But, in the UK, “evangelicals” are as likely to be internationalist and in favor of state invention in society as not. The political homogeneity that is so pronounced in the USA is not a feature on this side of the pond.

Christianity inherited from Judaism a belief in prophecy and early Christian texts reveal this, both in the belief that the life of Jesus is foretold in Old Testament prophecy and in adding to the prophetic tradition by predicting the future return of Jesus.

Although the New Testament clearly says that the date of the second coming cannot be known, this has not stopped two millennia of speculation. Tenth-century commentators claimed that raids by Magyars and Vikings were fulfilments of prophecy. End-times excitement and anxiety mounted as the Year 1000 approached (despite the fact that an error in calculating the dating system meant it was not actually 1000 years since the birth of Jesus). This accelerated during the crusades, when the armies of Islam were confidently identified as end-times actors. During the Middle Ages, rival popes, kings and emperors quarried prophetic scripture for accusations to throw at each other (usually the accusation of being the Antichrist).

During the Reformation, Protestants overturned the official Catholic view of prophecy as allegorical and were sure they lived in the “last days” – with the pope being the Antichrist. Radical Anabaptist groups established “New Jerusalems” in anticipation of the second coming. As Britain spiraled into civil wars in the 1640s, eschatological excitement was intense, only to be dashed when the monarchy was restored in 1660.

The same ideas were taken to New England and entered the cultural DNA of what became the USA. Eighteenth-century patriots accused George III of being “the great Whore of Babylon,” riding the “great red dragon” upon America (references to Revelation). In the nineteenth century the concept emerged of the Rapture, the idea that the “true church” will be removed from the earth shortly before a time of “Great Tribulation” preceding the return of Christ. The recent Left Behind series of novels embody this interpretation and have sold somewhere in the region of eighty million copies.

In the twentieth century, the establishment of the State of Israel and the Cold War galvanized prophetic study – especially in the USA – with many Christians identifying Israel as a fulfilment of end-times prophecy. For some in the Cold War, this outlook justified opposition to nuclear disarmament, since these weapons were seen as fulfilling predictions concerning widespread destruction, fire and sickness. This is where apocalypse meets foreign policy. Prophecy was interpreted in line with Western, and especially US, perspectives. In this process, end-times beliefs increasingly became associated with the political right. This was by no means inevitable, but it continues to be the case.

Since 2020, the COVID-19 pandemic has led to claims that it has eschatological significance. It should be noted that the same thing was said about the fourteenth-century Black Death. Anti-vaxxers and those unhappy with mask-wearing have included some who loudly identify these as aspects of an emerging international order associated with the Antichrist. This has resonated with – and been amplified by – conspiracy-theory-culture and the effects of social-media algorithms.

Some of the most extreme supporters of gun rights in the USA see them as weapons to be used in resisting the forces of the Antichrist in the last days.

In the face of such certainty regarding imminent end-times events, the urgent need to address the existential threat posed by climate change can be presented as irrelevant. After all, if the second coming is imminent, there is little urgency. Indeed, the threat from climate change may actually be viewed as an end-times judgement on humanity.

What is clear from all of this is that these beliefs are highly significant because, in an increasingly polarized political climate, the way they are being deployed in support of right-wing agendas impacts at the ballot box. This is especially so in the USA, where white evangelicals (even through a shrinking fraction of the electorate) punch well above their weight due to the extent of their ideological homogeneity, organization, and turnout. In any analysis of conservative voters’ political outlook and intentions, this end-times ideology needs to be recognized. Recognition does not imply agreement. But it can at least be the basis for dialogue, debate, and challenge.   Ignoring it may prove to be a serious mistake.