Alexander Hinton is Distinguished Professor of Anthropology and Director of the Center for the Study of Genocide and Human Rights at Rutgers University - Newark. 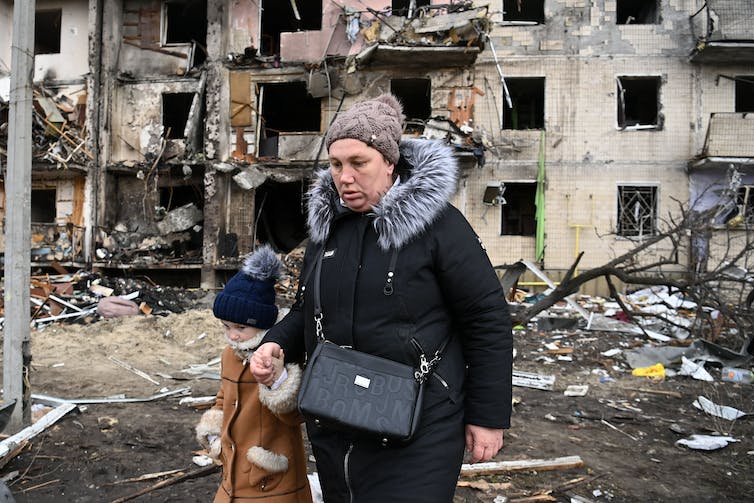 A woman and child walk away from a damaged residential building in Kyiv, Ukraine, where a military shell allegedly hit on Feb. 25, 2022. Photo by DANIEL LEAL/AFP via Getty Images

Ideas abound about why Russian President Vladimir Putin attacked Ukraine on Feb. 24, 2022. But Putin himself offered one unexpected – and unfounded – justification on Feb. 23 during a televised speech.

“The purpose of this operation is to protect people who, for eight years now, have been facing humiliation and genocide perpetrated by the Kyiv regime,” Putin said.

Putin alleges that Ukraine is targeting – and killing – Russian speakers in eastern Ukraine, where Russian-backed rebel separatists have been fighting the Ukrainian government since 2014.

As a scholar who studies genocide, I found that Putin’s claim was nothing new. World leaders have been playing politics with the term genocide since a Polish-Jewish lawyer, Raphael Lemkin, coined the the word in 1944.

This makes it all the more important to understand what genocide actually means and when humanitarian intervention to prevent genocide is legitimate.

Genocide is “the destruction of a nation or of an ethnic group,” according to Lemkin’s definition.

Such destruction involves a “coordinated plan of different actions aiming at the destruction of essential foundations of the life of national groups,” he wrote.

For Lemkin, committing genocide involves not just physical killings, but an assault on the spirit of a group of people – including their social, economic and political ways of life. His definition also encompasses cultural genocide.

In the aftermath of the Holocaust, Lemkin lobbied the newly established United Nations to pass a 1948 convention on preventing and punishing genocide.

The U.N. Genocide Convention establishes that genocide can happen by killing and destroying a group, preventing births and transferring children to another group, among other means.

Some countries used the convention as a political tool to mask their histories of genocide.

The Soviet Union and others insisted that the definition exclude political groups. The USSR feared it could otherwise be charged for killing political enemies.

The U.S. also had concerns about Black genocide accusations, a point I detail in my 2021 book “It Can Happen Here: White Power and the Rising Threat of Genocide in the US.”

The U.S. lobbied for the U.N. definition to emphasize intent and physical killing. This made it less likely the U.S. would be charged with genocide for Jim Crow abuses. 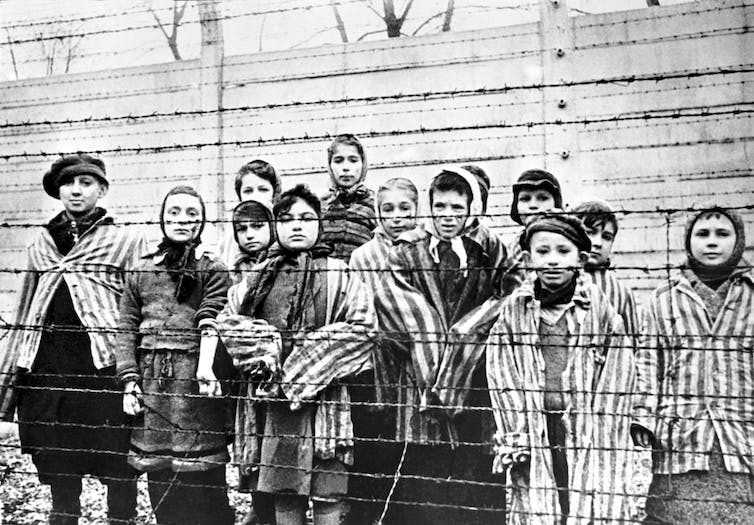 Putin’s allegation of Ukrainians committing genocide against Russians is an example of how genocide claims are misused for political reasons. In this case, Putin is misappropriating the term to justify invading Ukraine.

Since the conflict in the Donbas region began eight years ago, more than 13,000 people have been killed, including over 3,000 civilians. Many more have been injured, with 1.5 million people displaced.

While concerning, these abuses have been limited. And the violence doesn’t remotely resemble genocide, as defined by Lemkin and the U.N. convention.

Putin, meanwhile, has offered little proof to support his allegation – which he has repeated several times since 2015.

Russian ambassadors have circulated a document at the U.N. claiming Ukraine is “exterminating the civilian population” in Donbas. Russian representatives have also spoken of mass killings of people in eastern Ukraine who speak Russian.

But these Russian claims have been found by a number of observers to be baseless and even fabricated, serving only to justify a military intervention.

Governments and political leaders have long used genocide claims to make threats against other countries, or to provide a rationale for foreign intervention.

There is also a long history of government officials making arguments about the definition of genocide to deny that it was actually happening.

One of the most notorious examples was the U.S. denial that the mass violence in Rwanda in 1994 was genocide, arguing that it did not match the “precise legal meaning” of the term.

The U.S. feared that if it called the violence “genocide” it would be compelled to intervene in Rwanda. Armed militias killed an estimated 800,000 Tutsi people – an ethnic minority – and moderate Hutu people during this genocide.

Today, countries continue to deny that they are committing what experts consider genocide. China has denied that it is committing a genocide against Uyghurs, a Muslim group in the Xinjiang region that continues to suffer a host of abuses. Human rights groups have estimated that China has forcibly detained more than 1 million Uyghurs. 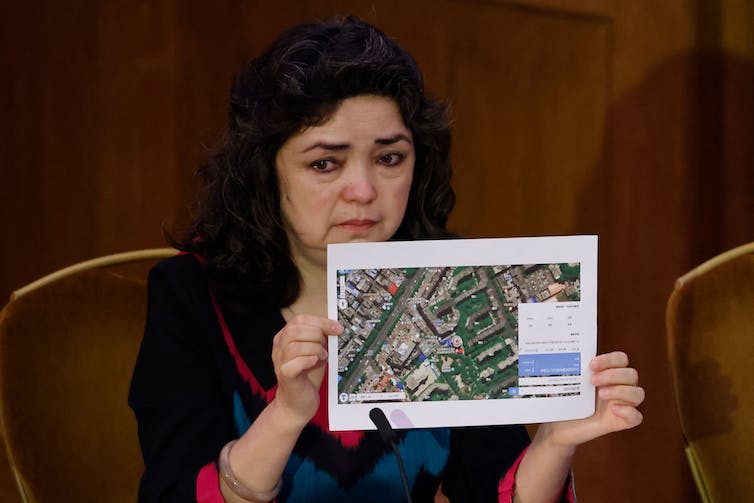 During a Uyghur abuse hearing with academics and lawyers in London in June 2021, Qelbinur Sidik, a Uyghur teacher, shows a photograph of the hospital where she says she was forcibly sterilized. Tolga Akmen/AFP via Getty Images

When is humanitarian intervention necessary?

Russia has made these kinds of false claims before. It sought to justify its invasion of Georgia in 2008 and annexation of Crimea in 2014 by framing them as humanitarian interventions.

If Russia truly believed genocide is taking place in Donbas, it could have made its case in a more formal and less violent way. Russia could have shared evidence with different U.N. bodies, including the U.N. Office on Genocide Prevention, and petitioned for an investigation.

Military intervention to prevent atrocity crimes – which include genocide, crimes against humanity, war crimes and ethnic cleansing – only gains a degree of legitimacy if clear evidence has been provided to the international community. It’s also necessary to collaborate with other countries at the U.N. or other global or regional multilateral actors.

Russia has not done this.

Given Russia’s lack of evidence of atrocity crimes and its failure to engage with other world powers, Russia use of military force in Ukraine cannot be characterized as a humanitarian intervention to prevent genocide. It is an invasion.

This invasion of Ukraine violates international law and is likely to cause exactly the sort of humanitarian crisis and widespread death that Russia claims to want to prevent.

[More than 150,000 readers get one of The Conversation’s informative newsletters. Join the list today.]