Has Magellan's Time for Debunking Arrived?

Felipe Fernández-Armesto holds the William P. Reynolds Chair of Mission in Arts and Letters at the University of Notre Dame, where he is a professor in the Departments of History and Classics and the Program in the History and Philosophy of Science. His latest book, Straits: Beyond the Myth of Magellan, is published this month (University of California Press). 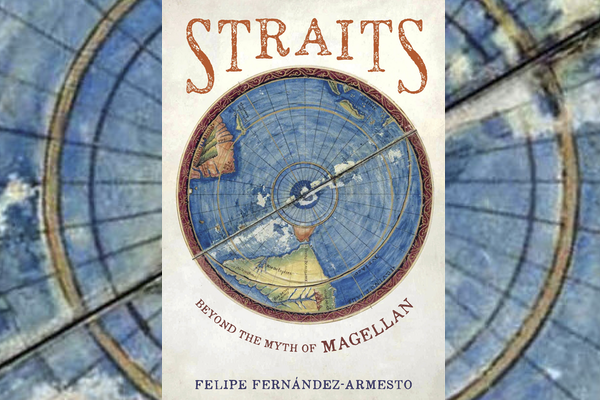 Truth is unpopular. Myth, superstition, conspiracy theory, scuttlebutt, fantasy, and drivel all seem more consoling in the service of prejudice. History has the best stories, but fictions outsell them. Even by current standards of misinformation, Magellan – if the findings of my book about him are right – is a peculiarly mythopoeic figure. Almost everything most people (or most of those who have heard of him) think they know is false. He did not attempt (much less achieve) the circumnavigation of the world; the Spice Islands were not, for him, the primary objective of his great voyage, which did not make the profit most historians ascribe to it. He conceived his enterprise against reason, and pursued it in defiance of experience. His voyage had no significant or improving effect on prevailing notions of the size and shape of the world. He failed comprehensively, losing his life and those of almost all his men. His real contributions to the exploration of the world – such as they are – have been forgotten in favor of falsehoods. Yet he retains the status, renown, adulation, and hero-worship that most other dead white explorers and imperialists – many of them more deserving for their virtues or morals – have lost.

You can measure the durability of Magellan´s reputation in the abuse of his name to make money, hallow propaganda, or gild other forms of intellectual wormwood. He has become a standard recourse for scientific naming projects and prizes. Dwarf galaxies were named for him in 1678.  In 1786 Jean-Hyacinthe Magellan persuaded Benjamin Franklin that the American Philosophical Society should administer the "Magellanic Premium" for major contributions to knowledge. Craters on the moon and Mars bear Magellan´s name, respectively since 1935 and 1976. An asteroid was dubbed 4055 Magellan in 1985. The Magellan telescopes adorn the Las Campanas Observatory in Chile. NASA launched the Magellan Mission to Venus in 1989. Species of penguin and woodpecker in South America and of butterfly in the Philippines share the explorer's name.

The popularity of Magellan's soubriquet with organizers of university competitions is remarkable, because universities are vulnerable to students'  “woke” sensibilities. The Magellan Prize, for instance, "offered through the generosity of the descendant family of the pioneering navigator, Ferdinand Magellan" is awarded in each year "to the best student beginning graduate studies in the University of Oxford" in lusophone subects.   Washington & Jefferson College publicizes its Magellan Project as "a unique... project of possibilities" in language that ticks as many supposedly Magellan-related boxes as possible: setting sail, exploring, passion, opportunities abroad, science, and world-girdling. The University of South Carolina advertizes an even more bouncily recommended "Magellan Ten Scavenger Hunt... To participate, take a photo ... and tweet it at us as fast as you can." In Chile the  government bestows "the Strait of Magellan Award for Innovation and Exploration with Global Impact." A New York club honors "an elite group ... in recognition of their contributions to world understanding," with an award named for a failed conqueror who burned villages and coerced and killed people.

Commercial organizations, too, exploit Magellan's fame. The "global" resonance that attaches to his name, despite its unfitness, is a marketable commodity. Hence a company that makes GPS devices calls itself Magellan Navigation, Inc. The business that manages my pension has a global investment fund called Magellan, to say nothing of a defunct internet search engine of the same name. A Canadian manufacturer is called Magellan Aerospace. Magellan is the name of  a firm that seeks "to provide ... a fantastic motorcycle holiday." Magellan Vacations Inc. run Magellan Luxury Hotels. You can find The Magellan Guides online. The same name graces—or disgraces—a cruise ship that offers, incongruously, trips to see the Northern Lights. If you go to the Gold Coast Railroad Museum in Miami-Dade County, Florida, you can see the Ferdinand Magellan Railcar, which carried U.S. presidents around their country in the 1940s and 50s. You can buy a 135-foot yacht named after him if you have appropriate amounts of money and sense.

Magellan is the name of "a protein-based sweetener that addresses the global sugar reduction problem," as well as of a racehorse,  a container ship, a Venezuelan baseball team, Magellan Petroleum Corporation, a former progressive metal rock band, a family of video games,  an auction house in North Yorkshire, and a light fitting "composed of multiple shades surrounding a single orb."  Magellan House is the name of a care home in East Grinstead and 2,947 square feet of "self-contained creative workspace" in a dock in Leeds. "Magellan Outdoors Waterproof Leather Landman Snake Hunting Boots" are, presumably, named after the explorer; presumably, however, "Magellan's EveryWear Camisoles and Women's Full Cut Briefs" are not.

Still, it is an impressive tally of arrogated endorsements. Nowadays, when sponsors and advertisers regularly cancel the contracts of celebrities who commit improprieties, the ubiquity of Magellan's name is strong evidence of how favourably people perceive him. Statues of or monuments to him in Lisbon and Sabrosa stand without, as far as I know, attracting objections from or causing offence to the local bien-pensants, or from more traditionally inclined Portuguese who recall Magellan´s treasonable defection to Spain. His statues in Mactan and Guam (where he launched invasions and burned natives´ homes), or Cebu and other parts of the Philippines (where he tried to found an empire), or  Punta Arenas in Patagonia (where his native victims had cause to regret his coming) are undefiled, except by the memory of his own excesses.

Most use or abuse of Magellan´s name defies the facts. My attempt to tell the truth about him, therefore, will be unwelcome to a lot of vested interests. Some of the truths I disclose, or confirm from the work of scholarly predecessors, are interesting, but offensive only to historians who have aligned themselves with errors: such truths include that Porto was his birthplace; that chivalric readings shaped his self-image; that class conflicts help explain the bloody dissensions that disfigured his great voyage. Other facts subvert the pedestal that displays him as a scientific icon: that he had only routine knowledge of navigation and geography, and a world-image very close to that of Columbus; that, like Columbus, when he bade for patronage he was willing to change his pitch to suit the potential sponsor; but that his chief ambition was to create a fief for himself in the Philippines.

He underwent manic mood swings, culminating in religious exaltation in those islands, where he set up as a thaumaturge with a hot-line to God, and a sort of street preacher, haranguing the natives in a theology he barely understood himself, sidelining the expeditions´ chaplains in his self-appointed role of evangelist. Religion was never his lodestar: his grasp of Christianity was superficial and did not stop him from deploying terror and arson against enemies, or provoking a war that was unjustifiable in the terms St Augustine laid down. He reverted to his longstanding values in the end. He leaped into battle and resigned himself to death in imitation of longstanding chivalric heroes.

Failure is often an ingredient of heroic status. The tragic hero of Greek tradition is a victim of ill fortune. The Dunkirk Spirit is unavailable except to the defeated. Japanese hero-worship reveres "the nobility of failure". The values of romanticism are those of the Blaue Blüme, unplucked because unreachable, or of the lover on Keats´s urn, who "wilt never have thy bliss," or of the impossible dream. Yet it is for spurious success, not noble failure, that Magellan is revered.

Of course, he had some good qualities or achievements, but they cannot explain his resistance to dethronement. Although he did not circumnvigate the world, he got, creditably, half way round it. He led his men further from home than anyone, as far as we know, had ever gone before. He was, as the cabin boy, Martín de Ayamonte said, the seamen´s preferred leader, representing the common man against a court-appointed officers´ coterie. Magellan's own loyalty was negotiable, but he could inspire deep fidelity in others. His courage edged into recklessness and he drove his expedition to disaster, but "the high that proved too high, the heroic for Earth too hard are," according to a respectable code, "music sent up to God by the lover and the bard."

In a former age, Magellan was a good fit for the spaces myths make for heroes. He suited the romantic era, when supermen were saviors. He evinced what I think can be called a "spirit of adventure," without which humankind would be enfeebled and impoverished. Nowadays, however, for people who want to tear down monuments, desecrate shrines and besmirch renown, nothing can purge the taint of association with imperialism, slavery, incontinent blood-lust, unjust discrimination, or any of the commonplaces of the past that we now recast as crimes. Can Magellan´s near-exemption from obloquy survive the truth?