Eddie R. Cole is Associate Professor of Higher Education and History at UCLA and author of The Campus Color Line. 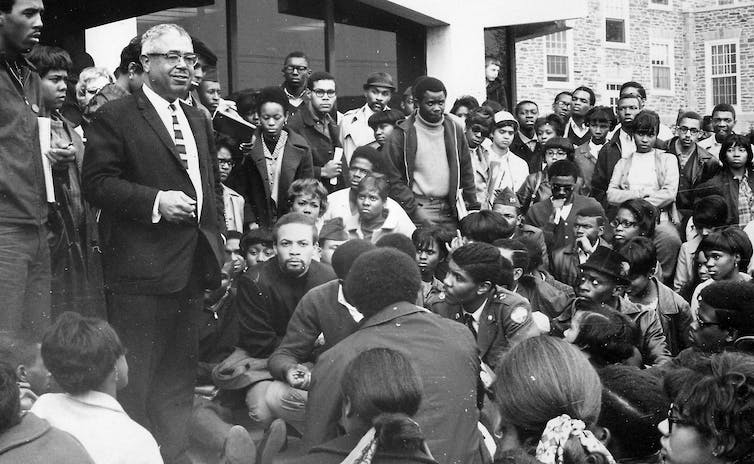 Historians have documented again and again how college students contributed to the civil rights movement. Less attention has been paid to the role college presidents played in the fight for equality. Here, Eddie R. Cole, author of the book “The Campus Color Line,” discusses various ways these leaders contributed.

1. What pressures did college leaders face in the civil rights era?

College presidents between 1948 to 1968 had to deal with different segments of society that were at complete odds with one another.

On the one hand, they oversaw schools where students were increasingly protesting segregation. But they also had to deal with segregationist politicians who controlled state funding for their institutions. Some of those politicians were not shy about their opposition to the civil rights movement. For instance, on March 3, 1960, North Carolina Gov. Luther H. Hodges urged public college leaders to direct students not to participate in civil rights demonstrations.

For the most part, Black college presidents ignored such requests.

But not always. For instance, as president of Kentucky State College – which is now Kentucky State University - Rufus B. Atwood expelled 12 students for participating in a sit-in at a local lunch counter in Frankfort, Kentucky, in 1960.

2. What was their position on boycotts and sit-ins?

For example, Cornelius V. Troup, the president of Fort Valley State College - which is now Fort Valley State University - in Georgia, invited Martin D. Jenkins, president of Morgan State College - which is now Morgan State University - from Baltimore on Oct. 10, 1960 to be the keynote speaker at the university’s founders’ day celebration. During his speech, Jenkins expressed support of sit-ins at segregated lunch counters.

“We are witnessing in this country, and indeed throughout the world, an almost revolutionary movement against racial segregation and discrimination,” Jenkins said in his speech. “This movement has many facets. Certainly one of the most interesting of these, and one which may turn out to be of considerable long-term significance, is the so-called ‘sit-in’ or ‘sit-down’ developed by college students, chiefly Negro college students … This is a good movement, and it has surprisingly beneficial results.”

Other university presidents did more than just speak against segregation. Willa B. Player, the president of Bennett College in Greensboro, North Carolina, boycotted the Meyer’s Tea Room, a restaurant in 1960 that had prohibited Black people from sitting in the dining area.

3. Did college presidents ever compromise?

At the time, Southern states like Maryland were so opposed to integration that – rather than desegregate their all-white universities – they funded out-of-state scholarship programs for Black residents to go to college somewhere else.

However, these scholarship programs were typically underfunded.

Despite the racist intent behind Southern states paying for programs for Black students to be educated in other states, some presidents of Black colleges and universities saw an opportunity to expand educational options for their students.

That’s why presidents of Black colleges, such as Jenkins, the Morgan State president, met with their respective state officials to increase funding to support these out-of-state scholarship programs. These programs helped students continue their education, especially at the graduate level, at desegregated schools.

Ultimately, not all Black college presidents were on the front lines of the civil rights movement. But many of those who weren’t still contributed to expanding educational opportunities for Black students from behind the scenes.

[More than 150,000 readers get one of The Conversation’s informative newsletters. Join the list today.]`32