The author is a historian in Albany, NY. He is the author of   The Spirit of New York: Defining Events in the Empire State’s History and The Crucible of Public Policy: New York Courts in the Progressive Era, both published by SUNY Press in 2022. 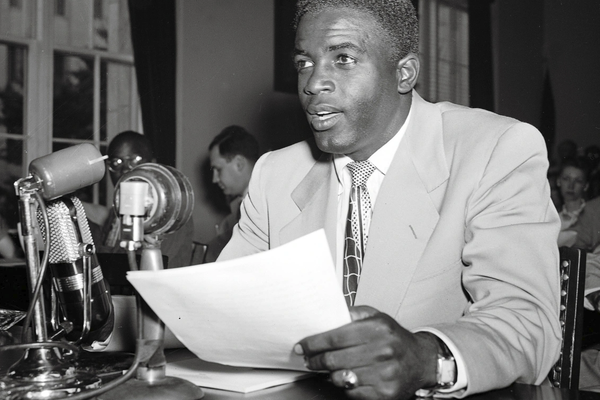 The confirmation of justice Ketanji Brown Jackson’s appointment to the Supreme Court represents a historic breakthrough. After a 53-47 vote in the Senate on April 7, she becomes the first Black woman to serve on the high court.

Justice Brown is part of a long tradition of determined Black Americans breaking through the barriers of prejudice in many fields.

Her nomination calls to mind Jackie Robinson, whose heroic story is famous and inspirational. He  debuted with the Brooklyn Dodgers in Ebbets Field in Brooklyn on April 15, 1947. He was the first Black man to play in major league baseball. He excelled through grit, perseverance, and exceptional athletic ability.

Robinson played for the Dodgers until 1956, braving racial epithets and even threats on his life, assembling an outstanding record as a hitter, fielder, base-runner and all-round stellar baseball player.

But Jackie Robinson was much more than a great baseball player. He used his fame to appeal to public opinion in other venues.

The “Red Scare” is a term used to describe public anxiety over the perceived threat posed by Communists in the U.S. during the “Cold War” with the Soviet Union which began in the late 1940’s. The House Committee on Un-American Activities (HUAC) began investigating alleged Communist infiltration and influence in the country. In July 1949, the committee invited Robinson to testify about a statement reportedly made in Paris by famed Black American actor Paul Roberson that Black Americans, because of racist discrimination here, might not fight the Soviets if the cold war turned into a hot one.

Robinson, one of  the nation’s most famous athletes and a former Army officer, had steered clear of politics. But he accepted the request and appeared before the committee on July 8, 1949. News reporters and photographers were on hand to record and report on his testimony. Robinson was on the spot, but he had been in tight places before and was cool under pressure. He used the high-visibility forum to make a case against racism and at the same time affirm Black Americans’ commitment to their nation.

“I don’t pretend to be an expert on Communism or any other kind of ‘ism’” he told the committee. But “you can put me down as an expert on being a colored American….I know that life in these United States can be mighty tough for people who are a little different from the majority – in their skin color or the way they worship their God or the way they spell their names.”

Professional baseball  might serve as a potential model for a way forward. Integration was proceeding, albeit slowly.  “A start has been made, progress goes on, and Southern as well as Northern fans are showing that they like the way things are working.”

“We’re going to make progress in other American fields,” Robinson went on. Black Americans naturally resent and will fight racial discrimination and inequality but “this has got absolutely nothing to do with what Communists may or may not be trying to do.”

In fact, most Black Americans detested Communism. “The more a Negro [Robinson was using the term then in common use]  hates communism because it opposes democracy, the more he is going to hate any other influence that kills off democracy in this country – and that goes for discrimination in the Army, and segregation of trains and buses, and job discrimination because of religious beliefs or color or place of birth.”

Black Americans have too much invested in their country to throw it away through disloyalty and the “siren song” of Communism. “But that doesn’t mean that we’re going to stop fighting race discrimination in this country until we’ve got it licked….We can win our fight without the Communists and we don’t want their help.”

Paul Robeson was a “famous ex-athlete and a great singer and actor.” “If Mr. Robeson actually made the statement, he has a right to his personal views.” But Robinson said it sounded “silly” to him.

Black Americans – “and Italians and Irish and Jews and Swedes and Slavs” – would work to keep their nation out of war. But they would “do their best to help their country win the war” if one came.

Robinson quickly left the hearing room after his testimony. He caught a plane back to New York and played in a night game against the Chicago Cubs. Robinson’s eloquent congressional testimony was followed by an  exciting demonstration of his baseball skills. In the 6th inning, he walked, stole second, advanced to third when the Cubs’ catcher overthrew the second baseman, and then stole home. He tripled in the 8th inning to drive in the third Dodger run. His team won, 3-0.

Robinson later wished he had been more supportive of Roberson. In his 1972 autobiography, I Never Had it Made, he wrote “that statement was made over twenty years ago and I have never regretted it. But I have grown wiser and closer to painful truths about America’s destructiveness. And I do have an increased respect for Paul Robeson who, over the span of that twenty years, sacrificed himself, his career, and the wealth and comfort he once enjoyed because, I believe, he was sincerely trying to help his people.”

But the speech had been a masterful one.

Jackie Robinson went on to join the emerging civil rights movement. His HUAC speech  presages that movement’s appeals for equality and racial justice while at the same time resonating with American ideals about equality and fair play. Commitment to the nation  needs to be matched by determination to mend its great flaws.

Those themes still resonate today in the Senate’s questioning of Judge Ketanji Brown Jackson.  Her ascension to the bench will be comparable in some ways to Jackie Robinson bravely walking onto Ebbets Field 75 years ago. In her work on that court, she will have many models and sources of inspiration. But few could be better than Jackie Robinson for courage, forbearance and historical achievement.