Richard White is the Margaret Byrne Professor of American History at Stanford University and the author of the newly published Who Killed Jane Stanford? 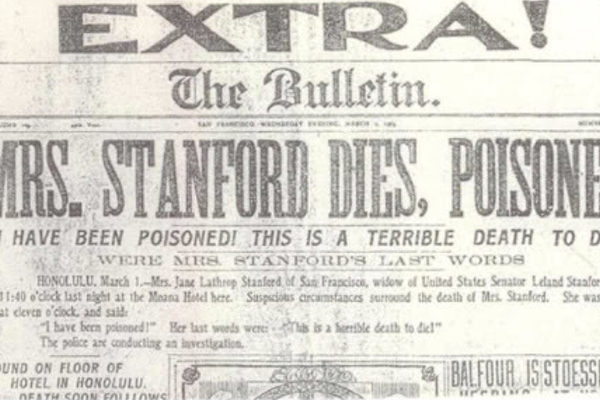 In 1905 Jane Stanford, the co-founder of Leland Stanford Jr. University, died of strychnine poisoning at the hands of a “person or persons unknown.”  Initially, the newspapers professed shock at the very possibility of the murder of a philanthropist.  Only an insane person could have killed Jane Stanford.

Those astonished knew very little about her.  As I found in researching Who Killed Jane Stanford?, the difficulty is that there were too many suspects with too many motives.

The creation of the fortunes that allowed philanthropy produced enemies.  Ambrose Bierce, the Gilded Age San Francisco newspaperman, recognized that the problem with philanthropy was philanthropists.  When he defined restitution in The Devil’s Dictionary as “the founding or endowing of universities and public libraries by gift or bequest,” he was only recognizing that philanthropists like Jane Stanford, Leland Stanford, and Andrew Carnegie had a lot to answer for.

That someone might murder Jane Stanford was no more surprising than the attempted murder of Carnegie’s associate, Henry Clay Frick, the founder of the Frick Museum, during the violent Homestead Strike.  It was no more startling than if we found out tomorrow that one of the Russian oligarchs had met a violent end despite their donations to Harvard University, the New York’s Museum of Modern Art, the Wilson Center, and the Guggenheim Museum.

The money that went to Leland Stanford Junior University paralleled the gifts of Russian oligarch today; both were exercises in money laundering and reputational enhancement.   One of the things that the current HBO drama, The Gilded Age, gets right is that the need to clean up the origins of great fortunes became the rationale for philanthropy. When President Charles W. Eliot of Harvard insinuated that Leland Stanford Junior University was an attempt “to raise a personal monument by the good use of ill- gotten money,” he was not wrong.

The usual retort to condemnations of accepting money from donors whose activities do not bear looking into is: better the money should go to museums, universities, hospitals, and libraries than yachts, mansions, and accoutrements of hedonism.

Gilded Age philanthropists claimed more.  They argued their philanthropy sprang from noblesse oblige.  Andrew Carnegie, the leading advocate of philanthropy, thought Stanford epitomized “the man of wealth” using his “superior wisdom, experience and ability” to administer his fortune to benefit his “poorer brethren . . . doing for them better than they would or could do for themselves.” 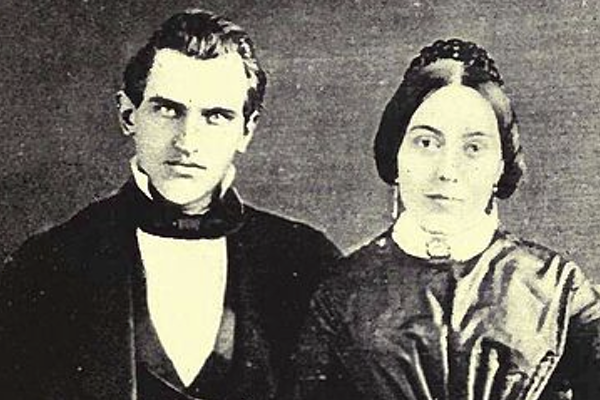 This kind of immense self-regard contributed both to Jane Stanford’s death and the efforts to cover up her murder.  The truth was Leland and Jane Stanford had made Stanford University one of the most peculiar institutions in North America.  The Stanfords’ incompetence, odd beliefs, and vacillating intentions made it necessary to cover up Jane Stanford’s murder to prevent challenges to her bequests.

The founding documents of the university, crafted by Leland Stanford, created a legal nightmare.  According to most legal criteria, there was no Leland Stanford Jr. University.  It took an amendment to the California Constitution after Leland Stanford’s death to correct –at least partially -- the problem. So much for “superior wisdom, experience and ability.”

Jane Stanford took up where her husband left off.  Or, actually, as if her husband did not leave off.  She was a spiritualist and considered herself the agent of her deceased husband and son. Ghosts ran the university. Jane Stanford told a newspaper reporter that she could not go on if her husband and son did not continue to visit her. “I never,” she said, “transact any business, or in fact do anything wor­thy of consideration without asking their advice. . . . What would I have done with all my business cares and worries, if I had been deprived of my two spiritual advisors?”

Her advice may have been supernatural, but her tools were quite material.  Her secretary, Bertha Berner, wrote Stanford “came to rule people through her wealth, and no crown or title could have made her rule more absolute nor the realization of her power more clear in her mind.”  She alienated most everyone around her and instituted an alarming array of changes that ranged, according to her closest advisor George Crothers, from the illegal to the unconstitutional, to the unworkable and unreason­able. She routinely violated the constitutional rights of faculty members.

Her violations of academic freedom made the university a fountain of scandal, and she sought to reorient it toward the “development of the soul” rather than the mind. “Cultivating the soul intelligence will endow them (students) with that which is beyond all human science and reveal to them God’s very self.”  This “was the university’s essential task,” even if it violated the university’s Enabling Act that prohibited any form of religious instruction.

By 1904 she had entered a stage of full sexual panic over the actions, and presence, of women students.  To stave off her attempts to banish them entirely, which would violate the university’s charter, the trustees proposed a system of matrons “with full authority to enforce discipline” over the female students. Watchmen and mounted guards would report any infractions of discipline “and turn over the culprit to the University authorities for punishment.” Warnings would be issued to “those who are conspicuous in their attention to the opposite sex.”

In 1905 she moved to dismiss the university president, David Starr Jordan, who, despite his own considerable faults, opposed her attempts to end co-education and to turn the university over to the Catholic Church.

Jordan and the administration greeted her death with relief and covered up her murder.  They buried her in an elaborate ceremony that ended with a prayer for the university, but in a sense the university’s prayer was already answered. Jane Stanford was dead and her money would go to Leland Stanford Junior University.

Lamenting her loss and praising her life proved much easier than dealing with her.  The best philanthropist was a dead philanthropist.