Marissa Gavin is a graduate student in the history of the French enlightenment and women's history at the University of Wisconsin-Milwaukee and a history educator. 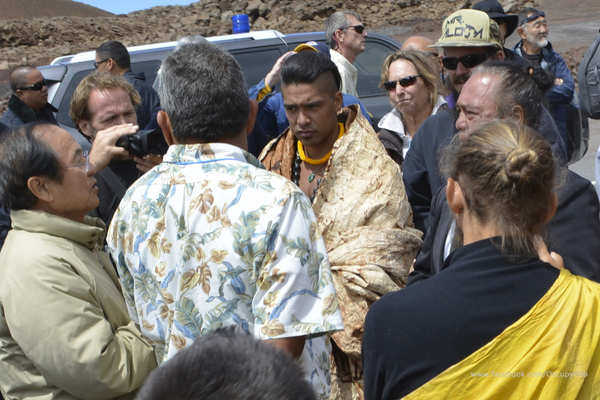 The Thirty Meter Telescope is a new class of extremely large telescopes that is expected to enable new scientific discoveries with its abilities to observe deeper into space. The founding of the TMT corporation happened in 2003, and in 2009, following approval from the State of Hawai’i Land Board; the dormant volcano of Mauna Kea was chosen as the preferred site for the construction of the telescope. The protests against the Thirty Meter Telescope in Hawai’i are not mentioned or included in the timeline provided by the TMT’s website. It instead only describes a temporary stand-down issued by the Governor of Hawai’i in 2015, and the selection of La Palma as an alternate site in 2016. It is important to highlight that the official website’s timeline glosses over the reasonings behind the construction delays, stating in 2016 “new contested case hearing begins in Hawaii” and in 2019 simply citing “efforts to restart construction stall.” Although the TMT website does not detail the protests that occurred at the Mauna Kea construction site, they are well-known and well-documented from various news outlets.

In late 2021, the construction of the Thirty Meter Telescope on Mauna Kea was delayed for a couple of years. The chief of staff of TMT cited the need to heal the relationship with the community and to recover from the delays caused by the pandemic; the project also needed additional funding from the US government to proceed. Despite stating a desire to heal the relationship with the community, the plans for construction are still projected to continue on following the delay, regardless of the concern of Indigenous peoples for the intrusion on and destruction of sacred land. While the relationship with the community is cited as a reason for the delay, the necessity for additional funding and the wait for the results of the federal Decadal Survey are likely the main causes for the postponement of construction.

According to the Office of Hawaiian Affairs’s website, Mauna Kea is a deeply sacred place that is regarded as a shrine for worship, as a home to the gods, and as the piko of Hawaii Island. Mauna Kea is further a critical part of the ceded lands trust that the State of Hawai’i must protect and preserve. In 2015, the OHA engaged the state and the University of Hawai’i in an extended mediated process to resolve the mismanagement of Mauna Kea, but was unsuccessful. Thus, the OHA has been concerned with protecting this site beyond the construction of the telescope, and there has been a long history of the mismanagement of this protected land.

The existing Caltech Submillimeter Observatory on Mauna Kea is set for its decommissioning process following the removal of its astronomical instruments back in 2015. For perspective, the removal of this existing Mauna Kea telescope that is scheduled to happen later this year has drawn attention for the necessity and difficulty of a safe removal. While Indigenous Hawaiians have sought the decommissioning and removal of the telescope from their sacred site, the removal process can be just as dangerous as construction. The ecological challenge of safe removal is captured in the multitude of studies conducted including an archeological assessment, a cultural setting analysis, hydrogeological evaluation, and more. This frame of reference demonstrates the extent of the impacts of the telescopes, both in endangering the natural environment, and the long-lasting impact on Indigenous sacred sites, one that remains even when the intrusion is in the process of removal.

Beyond the largest challenge of funding, protests also succeeded in halting construction of the TMT in both 2013 and 2018. Because of the challenges posed by Hawaiians protecting their land that was stolen, the TMT project has selected La Palma in the Canary Islands as a backup site option. The TMT’s website sites the evaluation of four potential backup site options, but does not explicitly list which locations were under consideration apart from La Palma. The conquest of the Canary Islands by Spain was completed in 1496, and the Indigenous populations, the Guanches, are largely and incorrectly believed to have been completely wiped out in the conquest. This assumption parallels the common assumption that Native Hawaiians went extinct; however, despite intermarriages with white Europeans or Americans, Indigenous lineage still exists in both locations. The backup site for the telescope chosen as another colonized site is telling. La Palma in the Canary Islands was colonized by Spain, and thus the backup site option would still operate on Indigenous lands stolen by a colonizer. While the protests may have posed enough of a challenge to the TMT project to force them to reconsider construction elsewhere, they have not penetrated the white settler colonial logic that refuses to recognize Indigenous lands as not within their possession.

What other sites were considered as alternatives besides La Palma, in light of indigenous land claims? Were indigenous land rights and potential dispossession even considered in the search for alternative sites? While the consideration of an alternative site beyond Mauna Kea comes as a relief to the Native Hawaiians who hold the volcano as sacred and under protection, the transference to a different site that was also stolen from Indigenous peoples still does not fix the underlying problem. This underlying problem is the assumption that colonized land belongs to the colonizer on the premise of its violent dispossession, and that the original inhabitants’ ties and connections to the land are invalid. This is not to discount the importance of further scientific discovery, but instead to bring attention to questions of the location and disruptiveness of the new scientific instruments, and how they impact the land and the communities tied to that land. Clearly, even in the removal process, scientific mechanisms may be dangerous and harmful to the land and its ecological systems, and so it is important to recognize that Indigenous communities have special relationships to the land that Westerners, Americans and Europeans, may not fully understand.

While there are indigenous land protectors in Hawai’i to fight for indigenous land rights, other indigenous groups lack such protectors. When an indigenous group does not have the ability to fight for their rights, does this mean we ignore those rights or pretend they do not exist? This leads one to ask several questions about the TMT project. Are there not any other valid locations which might be suitable for the construction of the Thirty Meter Telescope? Might we not find any other land to construct the telescope on – land not predicated on the dispossession of Indigenous peoples? Ongoing scientific study and discovery are both positive and necessary, but finding a way to reconcile such progress with the recognition and understanding of indigenous rights and ways of life is necessary if we are to successfully continue expanding our scientific study and understanding of the world. Without such recognition and understanding, are we even making progress?