What Elizabeth Johnson’s Exoneration Teaches about the Salem Witch Hunt

Tony Fels is Professor Emeritus of History at the University of San Francisco and the author of Switching Sides: How a Generation of Historians Lost Sympathy for the Victims of the Salem Witch Hunt (Johns Hopkins University Press, 2018). 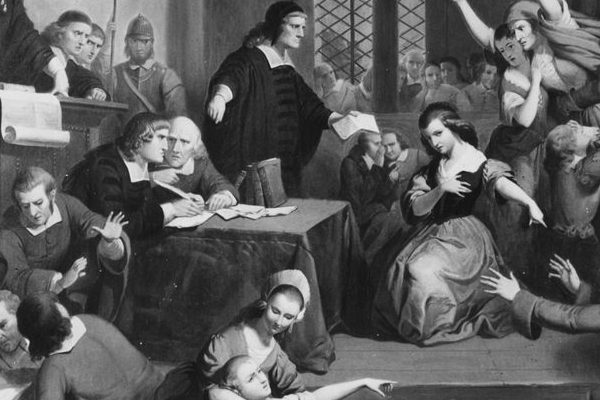 On July 28, 2022, the state of Massachusetts formally exonerated the last innocent victim of the infamous seventeenth-century Salem witch hunt. Elizabeth Johnson Jr., known to her contemporaries as Betty, was a twenty-two-year-old resident of Andover, Massachusetts when she got swept up in the frenzy of accusations, judicial examinations, jailings, trials, and executions that convulsed the communities of Essex County in 1692. All of the witch hunt’s other victims had already been exonerated by previous legislation. For some the process began shortly after the trials ended. By 1711 fourteen of the twenty who were executed at Salem had had their names cleared and their legal rights restored for purposes of inheritance. A 1957 state law added the name of one more person to this list, and the act’s 2001 amendment brought the remaining five executed suspects under its purview.

But Betty Johnson fell into a different category of victims. She was one of eleven individuals who had been convicted of witchcraft but, for a variety of reasons, never executed. Betty’s trial occurred in January, 1693, at the first proceedings of a new court that was established to take the place of the original (but now discredited) witchcraft court and to dispense with the remaining witchcraft accusations. Just three individuals were convicted under the revised rules of this later court, but the governor granted them last-minute reprieves, and they were soon pardoned and released along with those convicted by the earlier court who were still alive. In subsequent years, two of the three witchcraft suspects convicted in January 1693, along with the other eight convicted by the earlier court, had their names cleared and their legal rights restored. Despite petitioning herself to the Massachusetts legislature for legal restitution in 1712 (paralleling a claim filed two years earlier by her brother, Francis, for monetary compensation for her six months spent in jail), Betty Johnson, alone among all those convicted at Salem, never did receive such a simple declaration of justice – until now.

But what larger lessons does Betty Johnson’s story hold for understanding the Salem witch hunt? The most interesting one for me stems from the fact that Johnson had confessed. Over the course of roughly a year, the panic yielded over 150 suspects who were formally accused of witchcraft, fully one-third of whom confessed to the crime, some before they were even arrested. Since it is well established that nobody in eastern Massachusetts at that time was practicing witchcraft in any meaningful sense of the term (attempting to harness supernatural power to harm others), the question arises why so many of these individuals falsely admitted to committing a felony that carried the death penalty.

In Betty’s case her two statements of confession were made back to back on August 10 and 11, 1692, the first to the local Andover justice of the peace, Dudley Bradstreet, and the second to an examining board led by John Hathorne, the Salem town magistrate who sat on the colony’s special witchcraft court and who was certainly one of the prime movers in the witch hunt. What is most striking about Betty's confessions is how stereotypical they are. She simply drew from the known lore about witchcraft, including being baptized by Satan, who also appeared to her in the form of two black cats, in order “to pull down the kingdom of Christ and to set up the Devil’s kingdom,” taking these common notions on herself as if she were an avid follower. She claimed she had hurt a number of her neighbors by having her invisible specter sit on one’s stomach, by pinching or sticking pins in cloth likenesses of several others, and by invisibly attacking yet another with a spear made of iron or wood (though she wasn’t sure which). She said she had a “familiar” (left undescribed but typically thought to be an invisible animal) who nourished itself by sucking on her knuckle and at two other places, one behind her arm, a statement that examining women corroborated by noting two little red specks on her body. Throughout her confessions she cited as her criminal accomplices individuals who had already been named as suspects, including her cousin, Martha Carrier, the most prominent of the Andover suspects, a woman long believed to be a witch by many of her neighbors, and George Burroughs, the former minister from Salem village, who was widely regarded during the panic to be the witches’ ringleader. Carrier and Burroughs were both tried and convicted in early August, just one week before Betty’s confession, and both were executed on August 19, a little more than a week after Betty turned herself in.

Why did she take this step of falsely accusing herself? Although Betty came from a prominent Andover family -- she was the granddaughter of the town’s elder minister, Francis Dane -- the extended Dane family, itself part of the larger and more significantly targeted Ingalls clan, had already been attacked by the young and middle-aged people who began accusing their Andover neighbors of witchcraft starting in mid-July. Even more directly, Betty's confession was preceded (on the same day, August 10) by those of two of Martha Carrier’s children, eight-year-old Sarah and ten-year-old Thomas, both of whom implicated Betty Johnson as a member of the witches’ “company.” Most likely, Betty knew that she would be named by her Carrier children cousins, and all three may have thought, in the context of accusations that were wildly whipping around their community, that by confessing they might increase their chances of being treated with leniency. This was not an unreasonable assumption, since the Puritans valued repentance, even as they also showed determination to rid their communities of those they believed had allowed the Devil to grant them the power to practice witchcraft. Twenty were executed before the witch hunt effectively came to an end in mid-October, but none of these twenty came from the ranks of those who had confessed, even though this association was probably not discernible until mid-July and, even so, could never be guaranteed.

Confessions also tended to deflect blame. In Betty’s case, she made clear that it was the forty-two-year-old Martha Carrier who had “persuaded her to be a witch." Carrier, Betty said, had also "threatened to tear [her] in pieces,” if she did not do as she was told. Betty probably hoped that this aspect of her statements would also be protective, even as she must have equally known that confessions were regarded as the highest form of legal proof of actual witchcraft.

Beneath all these likely strategic motives, however, lies the fact that members of the Puritan communities of early Massachusetts could readily convince themselves that in some way or other, perhaps at a moment of weakness, they really had allowed Satan into their lives. A form of strict Calvinism, Anglo-American Puritanism held out virtually impossible standards of piety for its followers to live up to. Puritans sought to live in the truest, loving fellowship of Christ but one in which even a stray thought to get back at someone for a perceived grievance or to fail to carry out one’s dutiful role as husband, wife, parent, or child might occasion deep anguish. There is no explicit sign of such religious self-doubt in Betty’s own confessions, but other confessions during the witch hunt were filled with such self-recriminations. Fourteen-year-old Abigail Hobbs, for example, began her witchcraft confession with the admission, “I have been very wicked. I hope I shall be better if God will help me.” Collateral evidence suggests that Hobbs was referring to having been disobedient to her parents, lying out in the woods at night, pretending to baptize her mother, and not caring what anybody said to her. When Abigail Dane Faulkner, Betty’s aunt, confessed at the end of August, she acknowledged that all the accusations made against her kinsfolk had led her to “look with the evil eye” on those doing the accusing, “consent that they should be afflicted,” and “kn[o]w not but that the Devil might take that advantage,” even as she asserted that it was he, not her, who had done the afflicting. In one of the saddest examples of self-recrimination leading on to a witchcraft confession (though this episode was not part of the Salem events), Mary Parsons of Springfield, Massachusetts, imagined that she had entered into a pact with the Devil so she could see her deceased child again.

As the power and momentum of the Salem panic began to recede, many of those who had confessed to the crime of witchcraft recanted their earlier confessions. While there is no remaining record of Betty taking this step, as there is for many of the Andover confessors, we do know that she pleaded not guilty at her January trial, proof that she no longer held to her confession of August 10-11. The people of Essex County were coming back to their senses. Historical records suggest that Betty may have done well in her later years, successfully selling lands in 1709 and 1716 that she had inherited from her father and likely living until the age of 77. By that time – the 1740s – Puritanism itself was well on its way toward softening its spiritual message by moving in two directions, on the one hand with the rise of evangelical piety and on the other hand with the emergence of the Enlightenment’s rational faith that would soon become Unitarianism.