The Salem Trials Challenge Us to Resist Moral Panic and Suspicion

Anna Danziger Halperin, PhD is Associate Director of the Center for Women’s History at the New-York Historical Society Museum & Library, and the  NYHS coordinator for The Salem Witch Trials: Reckoning and Reclaiming, an exhibition originally curated for the Peabody Essex Museum (Salem, MA) by Dan Lipcan, Paula Richter and Lydia Gordon. NYHS will feature the exhibition through January 22, 2023. 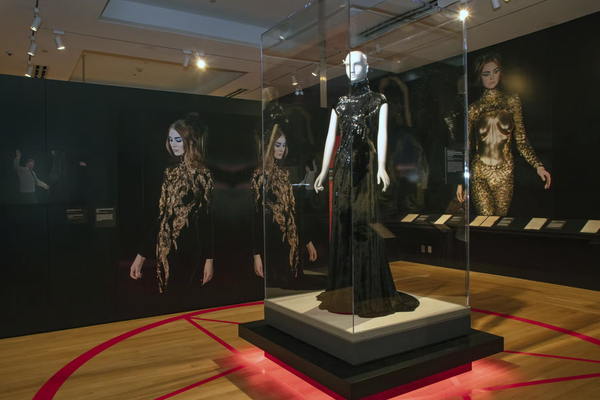 A gown from designer Alexander McQueen's 2007 collection "In Memory of Elizabeth How, 1692." The collection honors McQueen's ancestor Elizabeth Howe, hanged for witchcraft in 1692. Photo New-York Historical Society Museum and Library

In the winter of 1692, young girls in Salem, MA began to experience afflictions that seemed inexplicable: shortness of breath, convulsions, fainting spells, rigid limbs. Rumors spread that there must be a witch in their midst, colluding with the devil to send invisible, malevolent “specters” to harm the girls. And thus began the chaos that would become a defining example of intolerance and injustice in American history: the Salem witch trials. Twenty-five innocent women, men, and children lost their lives and over a hundred others suffered damaging legal accusations as neighbors, friends, and even family members turned against one another in stunning acts of betrayal.

Just in time for Halloween, the New-York Historical Society’s Center for Women’s History is opening a new exhibition, The Salem Witch Trials: Reckoning and Reclaiming that reexamines the crisis. Originally organized by the Peabody Essex Museum in Salem, MA, the exhibition features both original objects from individuals impacted by the witch trials of 1692 and two responses by contemporary artists who are Salem descendants. As my colleagues, Valerie Paley (Sue Ann Weinberg Director of the Patricia D. Klingenstein Library) and Keren Ben-Horin (Curatorial Scholar in Women’s History) and I discussed as we adapted this exhibition, the juxtaposition prompts us to challenge our assumptions about the familiar story and look for new lessons. For the past 330 years, the story has been told and retold, generation after generation–in part because the ways that the community turned against itself is both so mundane and yet so shocking. The court documents are rife with these moments of betrayal, and examining them in closer detail continues to reveal resonance and warnings for our own moment.

Take the story of two of the original “afflicted” girls, for example. Cousins Betty Parris and Abigail Williams lived together in the Salem Village parsonage, along with Betty’s parents and an enslaved Indigenous woman named Tituba. Girls in Salem had been experimenting with folk traditions of fortune-seeing, dropping eggs onto mirrors, when Betty and Abigail began exhibiting physical “fits,'' perhaps brought on by their own fears about the repercussions of these allegedly demonic practices forbidden by their Puritan religion and especially forbidden by Betty’s father, Reverend Samuel Parris. There is no evidence that Tituba was involved in these rituals until a neighbor asked her to perform counter-magic intended to discern the identity of the witch harming the children. Tituba combined rye meal and the girls’ urine, baked the mixture, and fed the resulting “witch-cake” to a dog. Afterwards, and perhaps due to the power of suggestion from watching this procedure, the scared girls identified Tituba as their tormentor. What noxious mix of fear and assumptions about their own superiority or Tituba’s Indigeneity and race led the girls to turn on this woman whom they lived with and who took care of them–literally the hand that fed them every day?

The court record detailing Elizabeth How’s case reveals how her own brother-in-law turned against her. The mother of six lived on a farm in nearby Ipswich when she was accused of witchcraft by vengeful neighbors who had held a grudge against her for over a decade. How asked her brother-in-law to accompany her to Salem Village to comply with the warrant for her apprehension, and yet he refused, stating that “if she had been sent for upon almost any account but witchcraft, I would have gone with her.” He also testified against her with a story blaming her for the death of a pig.

There are numerous other examples: Rebecca Nurse was bedridden with an illness when her neighbors, the powerful Putnam family, used the fact that she had not visited their afflicted daughter as evidence that Nurse must be the witch harming her. George Jacobs Sr., a farmer suffering from arthritis, used two canes to walk, but one of the afflicted testified that she had been beaten by an invisible spirit wielding the arthritic farmer’s mobility aid; that spectral evidence led to his execution. The stories go on.

And yet, there were other community members who sought to reign in the spiraling chaos as accusations spun out of control. The Reverend Francis Dane Sr. was one of the courageous individuals who signed a petition in October 1692 pleading with the governor of the colony to halt the trials. The court was disbanded shortly after, and in early 1693, Dane reflected, “Our sin of ignorance, wherein we thought we did well, will not excuse us when we know we did amiss.”

What can we take from these moments of betrayal, centuries later?  The story of Salem has inspired countless artistic and pop culture responses, each version telling the story anew for its own moment. The Center for Women’s History wants our visitors to walk away asking themselves: ​​when confronted with moments of injustice in our own lives, what role will we play? What are our responsibilities to our communities in the face of damaging, life-ruining accusations? Will we be bystanders or advocates? Accused or accusers? How can we take care of our own communities to prevent or repair harm? How can we stand for truth and justice? We want to believe that we'll protect those we love and stand up for our communities, especially those most vulnerable in our midst. Will we?