The Clash of Civilizations: A Novelist's Perspective

Ms. Yarbro, a novelist, is the author of the new non-fiction book, Confrontation at Lepanto : Christendom vs. Islam. The book was published under the name of T.C.F. Hopkins.

The naval Battle of Lepanto took place on 7 October1571 when a galley fleet of the Holy League, a sometimes-flimsy coalition of the Papacy (under Pope Pius V), Spain, Venice, Genoa, Savoy, the Knights of Malta and others, defeated a force of Ottoman galleys. The 5-hour battle was fought at the northern edge of the Gulf of Patras, off western Greece, where the Ottoman forces sailing westwards from their naval station in Lepanto met the Holy League forces, which had come from Messina, in the morning of Sunday 7 October[1]. It was the final major naval battle in world history solely between rowing vessels.--Wikipedia

The challenge when writing historical fiction is to show the reader not what the people of the time in question did – that is known and readily accessible – but what they thought they were doing. Non-fiction may have a similar goal in mind, but it conveys its understanding of historical events by telling the reader about them. It may seem like a small difference, but it is not. As a novelist who has written a great deal of historical fiction, I am often caught up in trying to find ways to make a period’s view of itself comprehensible to the reader without resorting to the dreaded and boring expository lump. It is also an element I tend to search out early when I start putting a book together, for the matter of an era’s self-perception and context means the difference between solid historical fiction and costume drama. 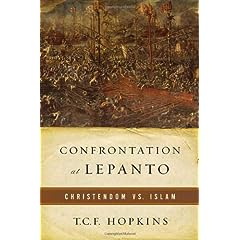 So what does this have to do with my popular history book, Confrontation at Lepanto by one of my alter-egos, T. C. F. Hopkins? It came about as a kind of detour. I had written a portion-and-outline of a novel about the events leading up to Lepanto from the point of view of a number of different characters, and showing how the social climate in Europe and the Middle East were affected by the battle. My agent submitted it, and it went nowhere, not because it wasn’t exciting, but because almost none of the editors who saw the portion-and-outline knew anything about the battle and therefore assumed it was unimportant. The editor who did actually know about it suggested that I might do a nonfiction book for the general (as compared to academic) reader, focusing on how the battle came about and what happened after it, much the way the novel was structured. Since I had done a good portion of the research, this change in direction was not as overwhelming as it might have been had I been starting from scratch; the editor and I had a number of discussions about it and decided on an approach that we both felt would have an appeal to a recreational reader.

He and I are both history buffs; he often laments the lack of readable popular history. I thought about it, did a proposal for a book on Lepanto and sent it to him, with a copy to my agent. The editor took the book to Tor, where I have been publishing for two decades, and asked Tom Doherty, who is also a history buff, if he might be interested. The book was contracted, and a second similar project was agreed upon, and I started to write.

Probably the hardest thing for a novelist writing non-fiction is the lack of dialogue. There are many written records of the second half of the 1500s, which are very useful in discovering what happened and how the people involved felt about it, but what secondary considerations were regarded as important. Ordinarily, such records would be used to inform dialogue and to develop characters, but in non-fiction, such records may be quoted but not presented as spoken, unless the source material is taken from actual speech. This means that delineating personalities and their purpose is of necessity externalized, which is very unlike what fiction does.

Fiction and non-fiction have two very different postures in relation to subject matter: fiction drags the reader into the story and does everything possible to keep him/her there; non-fiction is at a deliberate remove from the events for the purpose of analysis rather than involvement. But as the book was aimed at the recreational reader, someone more used to the conventions of fiction than non-fiction, an effort to draw him/her into the events was necessary, and the editor and I both agreed that a slightly more embroiling tone would appeal to the audience.

While developing the style of the book, I inquired of many recreational readers what they disliked most about non-fiction. Far and away the thing they liked least was footnotes. Of the forty persons I asked about non-fiction, only two had something they disliked more than footnotes – quotations given in the language of origin without a translation, and “snobbery.” I pledged to have no footnotes, and there are none in the book, although there is an index.

There are books galore out there on the strategy and tactics of Lepanto and so I decided I would leave most of that to those texts and would emphasize how the battle happened and its aftermath; I read seven accounts of the progress of the battle itself, and boiled that down to a survey of major events from the beginning to the end of the battle. But the bulk of my research went into finding those factors that led to the battle and what it changed in the two cultures as a result of the clash.

I freely admit I have a novelistic perspective on the battle, and on the project. I tend to develop opinions about the people involved, especially since I had already delved into them fictionally in the portion-and-outline of the novel about the battle. I dislike Felipe II and Pope Pius V; I like Alvise Mocenigo and Mahomet Sokolli, and it shows. I still can’t make up my mind about Don Juan of Austria, even though I know his character is in many ways the key to the progress of the campaign and its disappointing military consequences. I feel sorry for and disgusted by Selim the Sot, yet I abhor his actions and I’m appalled by his incompetence. Lala Mustapha offends me. All of those responses leak onto the page, which is where the novelist in me impacts the book, and which, I hope, will engage the recreational reader in what is, to me, a fascinating and decisive moment in history.

I've never asked my students--and thinking about it I should--but I suspect that one problem people have with footnotes is that they don't like to read them but are not sure that they can ignore them. The result is discomfort and distraction.

I (and I assume most historians) know when I can blow footnotes off, and when I can I often do not see them. In fact, in a history I have read for pleasure, I may not even remember if footnotes or endnotes are used.

PS Like Jerry I do like those occasional humorous gems that some authors slip into their notes.

"While developing the style of the book, I inquired of many recreational readers what they disliked most about non-fiction. Far and away the thing they liked least was footnotes. Of the forty persons I asked about non-fiction, only two had something they disliked more than footnotes – quotations given in the language of origin without a translation, and “snobbery.” I pledged to have no footnotes, and there are none in the book, although there is an index."

I enjoy Yarbro's vampire novels. They are a new take on the vampire legend and they are always historically informed. So I am not taking issue with Yarbro because I am an intellectual aesthete who looks down upon her as a non-historian. In fact I am in favor of the kind of independent scholarly work which her writing represents.

Often I will pick up a book I am browsing and read the footnotes, the bibliography and index. I believe, this scholarly apparatus, gives you more information about the author in a shorter time than any other way of evaluating a book

Also footnotes and endnotes can be fun and playful. The author who doesn't attempt to make footnotes fun and playful, at times, (even the most scholarly author) has missed an opportunity. Playfulness is part of learning and footnotes often provide a field for play.

That should read...Sulieman the Magnificent...

What a shame that you couldn't find a publisher for your original manuscript. I adore well-researched and well-written history, whether it is fiction or non-fiction. I would have to say that after reading a fictional account of an historical incident it has led me to further examine the non-fiction aspects of such.

Because of reading a novel of the attack on Malta by Sulieman the Great I will be visiting Malta, hopefully, in early 2008.

Also, thank you for giving us an insight into the genesis of publishing a novel. I will certainly be asking my local library to purchase a copy of your book.