The Kids These Days: A Bright Future for Economic Literacy?

Mr. Caplan is an Associate Professor of Economics at George Mason University, and the author of The Myth of the Rational Voter: Why Democracies Choose Bad Policies (Princeton University Press, 2007)

The Nation's Report Card, a national test of high school achievement, came back last month. One of its most trumpeted results is that American high school students are doing pretty well in economics. 37% of high school seniors performed at the Basic level, 39% performed at the Proficient level, and 3% at the Advanced level. For economists, these are surprising results. Why? Because economics, more than any other academic discipline, has a long tradition of complaining that laymen "just don't get it."

On closer examination, though, there is less to the Nation's Report Card on economics than meets the eye. Like almost all tests, the Nation's Report Card is ultimately graded on a curve. If we raised the threshold for success, or just asked harder questions, measured performance would plummet. Furthermore, since this is the first time the economics test was administered, it shows nothing about whether students' knowledge of economics is improving.

Though the Nation's Report Card sheds little light on this question, the truth is out there. In my book, The Myth of the Rational Voter, I show that a wide range of public opinion data confirm economists' concerns about the economic literacy of the man in the street. Most importantly, the data show that, contrary to popular arguments about "the wisdom of crowds," the public's economic errors do not harmlessly cancel each other out. Not only do laymen tend to be wrong; they tend to be wrong in the same way. 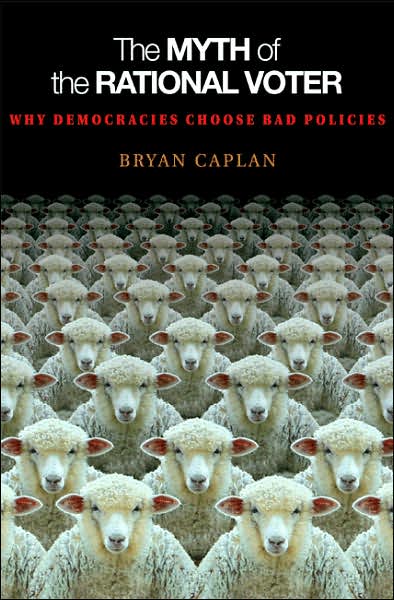 For example, economists overwhelmingly conclude that free trade with other countries is better for our economy than protection. Few members of the public are familiar with the arguments that undermine economists' consensus, but that's hardly surprising. Believers in "the wisdom of crowds" will tell us not to worry. Why not? Though most people are unfamiliar with the arguments for free trade, some will be more optimistic than the economists, others will be less optimistic, and the two groups will cancel out.

Or so the "wisdom of crowds" story goes. Unfortunately, public opinion about economics doesn't work this way. In the real world, the less people know about economics, the more likely they are to confidently embrace the protectionist position. You might think that people would be open-minded – even agnostic – about fields they haven't studied. But when issues hit emotional nerves, people don't like to suspend judgment. Foreigners selling us cheap products is one of those nerves. Our natural reaction is fear and anger, even though dispassionate economic reasoning shows that – since free trade between countries makes both sides richer - there is little to fear and less to be angry about.

The first is anti-market bias, the public's tendency to underestimate the social benefits of the market mechanism. Non-economists tend to distrust markets because they rely on greedy, selfish motives. Bad intentions lead to bad results, right? No; economists have spent centuries explaining that greedy, selfish intentions normally lead to good results. If you get ahead in business by making your customers happy, then greed drives you to serve your fellow men. Economists add that if markets aren't working well, tweaking incentives usually makes more sense than shutting the market down. If carbon emissions are the problem, for example, taxing emissions is one of the cheapest ways to cut back.

The second is anti-foreign bias, the public's tendency to underestimate the social benefits of economic interaction with foreigners. The public's protectionism is one example; popular outrage against immigration is another. In both cases, the public worries that foreigners are somehow taking advantage of us. Economists, in contrast, emphasize the mutual benefits of trade, including trade in labor. What about the side effects – from declining wages for low-skilled Americans to burdens on the budget? Economists are more than willing to discuss them, but usually conclude that they are, at best, greatly exaggerated. Furthermore, even if these problems were more serious, the pragmatic response would not be to keep out new immigrants and deport old ones. If immigrants are hurting low-skilled Americans, you could impose a compensatory tax on immigrants; if immigrants are a burden on the welfare state, you could make them ineligible for benefits.

Next, there is make-work bias, the public's tendency to judge economic performance by employment rather than production. To most people, "saving jobs" just feels right. The problem is that the history of economic progress largely consists in learning how to get more output with fewer workers. That is why almost none of us are farmers anymore: We figured out how a handful of workers could feed the whole country, freeing up the rest of the workforce to create the modern world.

Finally, laymen suffer from pessimistic bias, a tendency to see a world going from bad to worse. Every piece of bad news, every crisis, confirms their sense of decline. Economists, in contrast, look at the big picture. By historical standards, the world is richer than ever, and rapidly improving. In fact, there has never been a better time to be alive.

It is the strength of these biases that make economic education so challenging. In most subjects, students know what they don't know. In economics, in contrast, students arrive with strong prejudices. A well-designed economics course has to face this problem head on. It has to emphasize the contrast between the popular view and the expert view. It has to make some difficult arguments accessible to the students. And it has to do so without putting the classroom to sleep. We'll know we are making progress when high school seniors start critiquing the anti-market, anti-foreign, make-work, and pessimistic biases of their elders.

In other words, we should look forward to the day when parents have to ask themselves: "What are the schools teaching these kids, anyway?"

The wisdom of crowds? You have this upside down. The worthwhile and classic book which belongs in every library is "Extraordinary Popular Delusions and the Madness of Crowds," by Charles MacKay, 1841.

"The first is anti-market bias, the public's tendency to underestimate the social benefits of the market mechanism."

Maybe that's because their houses are being foreclosed in record numbers, can't afford a hospital stay and have to pay over $3 per gallon of gas when record profits are being made at Exxon. Of course, economists like yourself play the role of Pangloss and tell them that this is perfect working out of supply and demand.