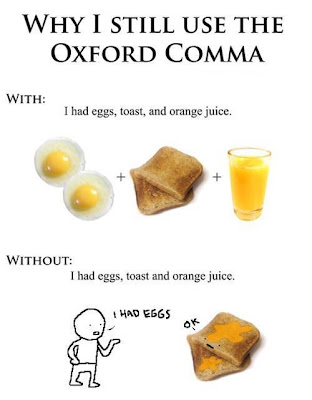 I just got involved in an internet freeforall on this issue, which I've wondered about over the years. Do you say "eggs, toast, and orange juice" or "eggs, toast and orange juice"? I have always put in the "extra" comma, as did Robert Nozick, author of Anarchy, State,[sic] and Utopia.

One commenter spoke of being surprised when the last comma "came into use." Actually, I'm pretty sure The Oxford comma was the original system, gradually it has been disappearing. Take a look at any eighteenth century author, such as David Hume or Dr. Johnson. It's commas all the way down! Over the years, language tends to become simpler. People are "economical." When the process goes too far, we say "lazy. In this case, I think its laziness.

I see two reasons for the Oxford comma: 1) consistency - why should the last two elements of a series be different from the others? 2) the breath rule - commas represent pauses.
Some see the comma itself as inconsistent. Why is there no comma after "eggs" in "I had eggs and toast." The second comment above explains why. Just say "I had eggs and toast" aloud. See? No pause after "eggs."
Some say that the "and" at the end of the series does exactly what the comma does, making the comma redundant. Not so, if only because "and" is sometimes part of the name of one thing, and not part of a series at all. Like every other word, it is ambiguous. Consider how a "no extra comma" person will have to write this sentence: ""His eclectic CD collection included pop, heavy metal, and rhythm and blues." To my eye, the two "ands" become somewhat confusing. (HT to Bella Shortt for picture.)