Four days ago was the 70th anniversary of President Roosevelt’s signing of Executive Order 9066, which resulted in the internment in "War Relocation Camps" (aka concentration camps) of some 110,000 Japanese Americans and Japanese who lived along the Pacific coast. 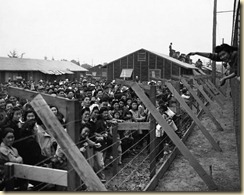 Any resemblance to the National Defense Authorization Act’s provision for indefinite detention without due process, signed recently by President Obama, is strictly ominous.