Blogs > Jim Loewen > George Zimmerman, Harmony Stair, and the Elephant in the Room

George Zimmerman, Harmony Stair, and the Elephant in the Room 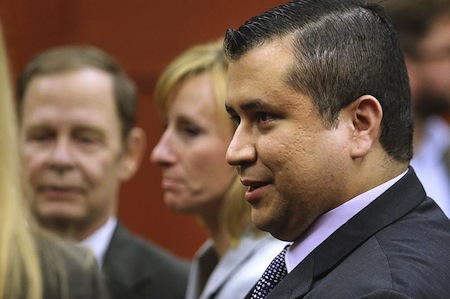 After the Florida jury found George Zimmerman not guilty of second-degree murder or manslaughter for killing Trayvon Martin, everyone had an opinion about the verdict. Many people sought my opinion, including a major radio station in Jamaica and Al Jazeera. I knew that my own knowledge about the killing was no more than that of most of my listeners or readers. Hence I could not add to their knowledge base. I could only give them my opinion about the matter. So it would be about me and my opinion. What's the point of that?

I had expected the jury to find Zimmerman guilty of involuntary manslaughter. In my mind, I had compared his action to the fairly notorious 2011 case of Harmony Stair, a 33-year-old woman from Blacksburg, Virginia who was 7½ months pregnant. Stair had been making jello shots for a party and sampled her product. (Jello shots are small servings of jello made with vodka or grain alcohol.) She then drove drunk, causing a crash that fatally injured her fetus. Like Zimmerman, she was charged with manslaughter for his (her child's) death. Unlike Zimmerman, she was not charged with second-degree murder.

Involuntary manslaughter is the proper charge when a person has been unlawfully killed, but the perpetrator had no intention to kill. Stair did not intend to harm her unborn child. (Since the fetus was old enough to survive outside the womb with standard medical procedures, I use "fetus" and "unborn child" interchangeably.) Whether Zimmerman had any intention to harm Trayvon Martin is not known. Certainly he suspected that Martin was a criminal.

Stair never went to trial. She pleaded guilty last April, will be sentenced this September, and is out on bail until then. As the world knows, Zimmerman is a free man, able to resume his neighborhood watch activities, should he so choose.

I suggest you try discussing these two outcomes with acquaintances of differing politics. Many on the right defend both Stair's conviction and Zimmerman's not-guilty verdict. About Zimmerman's verdict, for instance, right-wing rocker Ted Nugent called Martin "a troublemaker who brought about his own demise." He suggested Zimmerman should sue Martin's parents over the injuries that Martin caused him. Many on the left question both verdicts. Reverend Al Sharpton called Zimmerman's acquittal "an atrocity." Again, these reactions tell more about the persons reacting than about the cases under discussion.

In the Washington Post, columnist Richard Cohen faulted those politicians (and others) who wore hoodies as a sign of solidarity with the deceased. "Where is the politician who will own up to the painful complexity of the problem and acknowledge the widespread fear of crime committed by young black males?" Thus Cohen's answer to the question, "Would Zimmerman have followed a young white male?" is, "Of course not," but he hardly denounces such racial profiling. Instead, he goes on to defend Zimmerman and the practice as justified owing to black males' greater propensity to commit crimes.

Cohen complains that no one will talk honestly about black crime. It's the elephant in the room. So, let's examine the elephant.

Without a doubt, young black men commit crimes at a higher rate than young white men. According to Census Table 325, Arrests by Race in 2009, the difference is four to one. No doubt, some of this difference results from different treatment by race and class within the criminal justice system. No doubt, a white middle-class family with a lawyer is more likely to get their son back without an arrest record than a black single mother living in public housing. But even if we suppose that the black crime rate is four times the white crime rate, we still face a logical problem. The black crime rate is 0.46% of the black population, while the white crime rate is 0.12% of the white population. Of course, George Zimmerman and Richard Cohen would point out that they don't propose profiling all African Americans, just youngish black males. We can accommodate that point by assuming that all arrests of African Americans are of males (they aren't), and that all those arrested are between 15 and 44 years old (they aren't), we divide the number of African Americans arrested by the male population just in that age bracket. This result, 2.1 percent, obviously overstates the proportion of young black males who are arrested. Nevertheless, about 98 percent were not arrested.

So the George Zimmermans of the world, the Richard Cohens of the world, are wrong 98 percent of the time in their "justified" racial profiling. True, doing the same statistics on white males would show that only about 0.5 percent were arrested. The issue becomes, does 2.1 percent versus 0.5 percent justify profiling? Or should we treat the next young black man we see as a person deserving of respect unless he gives us reason to believe he is not?

For those still not convinced, let me add one more point: about three men get arrested for every woman arrested. Should we therefore profile men? (Yes, I am aware that Shulamith Firestone, Andrea Dworkin, and some others suggest exactly this. I hope most readers disagree.)