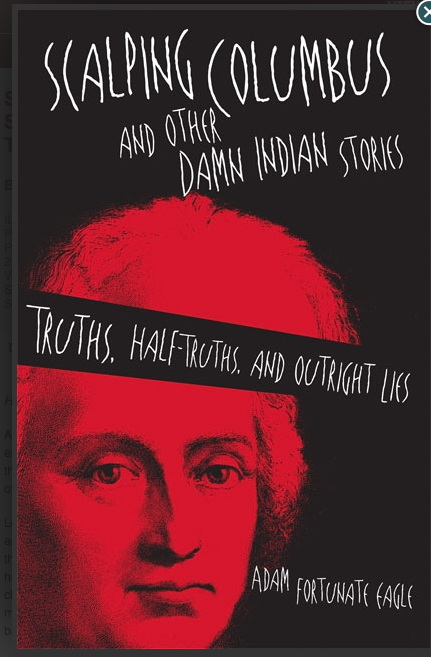 I just finished a new book by Adam Fortunate Eagle, formerly Adam Nordwall: Scalping Columbus and Other Damn Indian Stories: Truths, Half-Truths, and Outright Lies. Oklahoma University Press continues its tradition of publishing important books by and about Native Americans. But it's not like any other university press book, at least none I've ever read.

The problem — or perhaps the fun — of the book begins with its preface by Fortunate Eagle, an Ojibwa:

Some of these stories are so outrageous they appear to be pure exaggeration, when in actual fact they are true; only the author knows which are fact and which are fiction.

Other stories are based on facts, which begged for embellishment. I will stand by the facts until someone accuses me of fibbing. At such time, I reserve the right to accept or reject that challenge based on my assessment of the level of intelligence and knowledge of my accuser....

Some of my stories are total fabrications disguised as the truth. These tales test not only the literary creativity of the author but also the gullibility of the reader. Personally, I find it impossible to distinguish the difference between outright fabrications and bullshit. You, gentle reader, must decide. But don't you agree that bullshit is the fertilizer of the mind?

I consider the preface hilarious, but also thought-provoking. Certainly some American history textbook authors cannot tell the difference between outright fabrications and bullshit.

Surely bullshit is not the fertilizer of the mind, however, until that mind recognizes that it is bullshit, or at least might be. Then, Fortunate Eagle is surely right. Consider A History of the United States, a textbook aimed at high school students ostensibly written by Daniel Boorstin and Brooks Mather Kelley. It claims, inter alia, that the United States has sought peace around the world. Indeed, not only have we sought peace rather than dominance, we have also done so only reluctantly: "Still a superpower, the United States could not avoid some responsibility for keeping peace in the world." The eleventh-grade mind that believes this claim is not fertilized. As soon as the eleventh-grader questions the statement, however, then his/her curiosity may be fertilized by what the textbook left out. Eventually, s/he may go on to learn what we really did, and why.

The very first story in the book, "Moose on the Loose," prompted me to laugh so hard that I had to put the book down. Seems that Fortunate Eagle, back when he was Adam Nordwall and was only about ten, was out gathering wild rice on the rez in northern Minnesota. He spies a moose, eating some water lily stalks with his head under water. Trying to be a good provider, he fashions a noose from the rope on his boat and manages to lasso its antlers. The ensuing ride winds up in an upheaval that has to be read to be believed ... or perhaps disbelieved — the reader has already been warned. 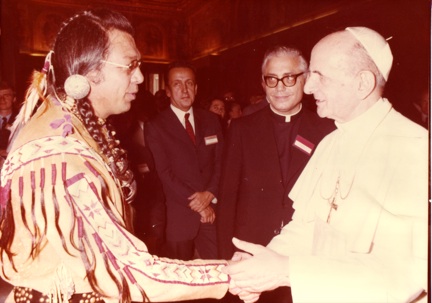 This photo shows Fortunate Eagle with the Pope shortly after his discovery.

Some other stories are not so funny, because Fortunate Eagle is an Unfortunate Punster. Others treat serious issues that faced (and still face) Native Americans in this nation of ours. Readers should know that this is the man who in 1973, flew Alitalia to Rome, planted a banner, and famously "discovered" Italy. He is also the leader, according to the FBI, of the American Indians who took over Alcatraz in 1969 on behalf of Native rights. Both of these stories are in the book, one factually, one as fable.

Scalping Columbus includes another novelty. Fortunate Eagle does not really leave "only the author" knowing which tales are fact, which fiction. Instead, he ends with an appendix that tells the curious reader the proportion of bullshit in each chapter. This innovation other authors, especially of U.S. history textbooks, might emulate.