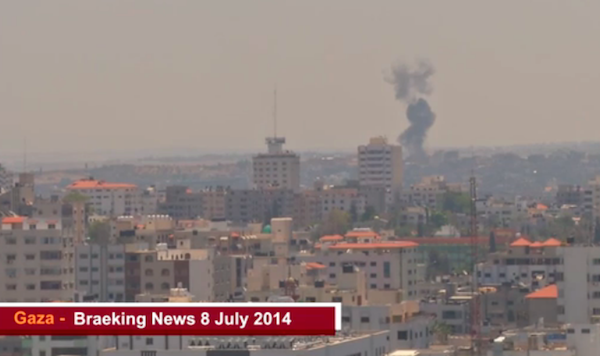 Bombs are falling and people are dying in Gaza. It's headline news in America's mass media. As usual, though, we get only today's events, with no historical context to explain what's really going on and why.

The crucial piece of history our mass media ignore is that one basic principle has always guided Israel's foreign policy: Keep the perceived enemies divided; never let them unite.

That's why Israel aided the creation of Hamas in the 1980s. The Israeli government feared the prospect of all Palestinians uniting under the flag of the Palestinian Liberation Organization, dominated by Yassir Arafat's Fatah party. Hamas seemed to offer a counterweight.

The recent reconciliation of Hamas and Fatah raises that specter again. Israeli leaders want to stop it at all costs, to drive a wedge into the uneasy peace between the rival Palestinian parties. Hence the onslaught against Hamas and Gaza.

Though he's in his 90s, the veteran Israeli politician and commentator Uri Avnery can see it all quite clearly. After three Israeli teenagers were kidnapped in the occupied West Bank, "the Netanyahu government immediately saw in the incident an auspicious opportunity. Without the least evidence (as far as we know) it accused Hamas. The next day," he wrote, the Israelis "started an attempt to eradicate Hamas in the West Bank," with massive arrests of Hamas leaders.

"The main aim," Avnery posits, "is to pressure Mahmoud Abbas to abandon the inter-Palestinian reconciliation and to destroy the new experts-only Palestinian government. Abbas resists. He is already widely denounced in Palestine, because of the ongoing close cooperation between his security forces and the Israeli ones, even while the Israeli operation is continuing."

Avnery wrote that before Israel began bombing Gaza, where Hamas rules. Surely he, and Israeli government strategists, knew that the crackdown on Hamas would provoke some ineffectual rocket fire by splinter groups in Gaza, giving Israel an excuse to blame Hamas for those rockets, too, and begin bombing Gaza.

Now that so many Palestinians have died, the pressure on Abbas to "get tough" is all the greater. So is the pressure on Hamas to fight back, to abandon the nonviolent policy that was so basic to the Fatah-Hamas unity government. The more rockets fly out of Gaza, the harder it will be to patch up the Fatah-Hamas split. And the easier it will be for Israel to go on making its disingenuous case: How can we negotiate a peace with "terrorists" who want to destroy us?

The Israeli government must have predicted all this when it first pinned blame on Hamas for the kidnappings, although it could present no evidence to support the charge. Anyone who has followed the conflict for very long could have predicted it. The logic of Israel's strategy, however deadly, is easy enough to see.

So why is that strategy so glaringly absent from U.S. press coverage of the current conflict? Are American journalists in Jerusalem just too ignorant to get it? That's possible, but it doesn't seem likely.

What's more likely is that their perceptions and the perceptions of their editors are in a sort of tunnel vision. They can only see what long-standing American myths allow them to see. Two myths have dominated the history of American perceptions of the Israel-Palestine -- or what's often called, more broadly and misleadingly, the "Israel-Arab" -- conflict.

From the time that the State of Israel was born in 1948 and immediately plunged into war with neighboring nations, the U.S. news media tended to treat it as a "tit for tat" struggle. It's a story that's been familiar to Americans since colonial times: In the Old World, there's just this inexplicable urge for nations to fight each other. "Inexplicable" means we don't have to try to understand the context, nor the motives of each side. They just hate each other and will go on fighting forever.

That's a widespread view, in this country, of the Israeli-Palestinian struggle. It's showing up once again in headline after headline that all boil down to "Israel and Hamas Trade Bomb Attacks" -- period, as if nothing more need be said.

In the aftermath of the Six-Day War of 1967 a second myth came to the fore in the U.S., one that saw Israel as a permanent victim of constant hatred and attack from its neighbors. It's familiar to Americans from endless hours of watching television: cowboys against Indians, cops against robbers, and any number of other variants on the "good guys against bad guys" myth -- with no doubt allowed, in this case, that Israel is the good guy. Maybe we should call it the "Israel can do no wrong" myth.

That's also a widespread view showing up now in headlines in this country, even in our most influential newspapers, like: "Rockets Hit Israeli Heartland as Offensive Begins." Though the story speaks of Israel's offensive against Gaza, the cursory reader (and aren't most readers cursory?) who sees only headlines would assume that it's Hamas on the offensive -- "as usual," the mythic voice adds subliminally. After all, that voice says, Hamas is a "terrorist organization," isn't it? Israel's just defending itself, isn't it?

Now these two myths are working together to put blinders on American journalism.

The "tit for tat" myth is probably dominant, for historical reasons. Beginning with Israel's 1982 invasion of Lebanon, when its army stood by knowingly while hundreds, perhaps thousands, of Palestinians were massacred in the Sabra and Shatilla refugee camps, American journalists began to back away from the "Israel can do no wrong" myth. Over the years, they've increasingly informed us that some blame must be ascribed to Israeli policies.

In U.S. coverage of the current situation, though, even the rare explicit critique of Israel usually reinforces the mythic perspective.

For example, the New York Times' Isabel Kershner briefly mentioned one criticism: "Israeli experts often describe Israel’s periodic campaigns in Gaza in terms of 'mowing the grass,' with the limited goals of curbing rocket fire, destroying as much of the militant groups’ infrastructure as possible and restoring deterrence. Critics say the use of such terminology is dehumanizing to Palestinians and tends to minimize the toll on civilians as well as militants."

But anyone reading Kershner's report, or viewing the Times' web video on "Mowing the Grass," is likely to conclude that, even if the terminology is dehumanizing, the practice makes perfect sense, because the war can be understood only as "tit for tat" or "good guys against bad guys." In such a war, the stronger nation would naturally want to "mow the grass" every so often.

There is no place in American mass media coverage for any other viewpoint -- and certainly not for the aim that so obviously motivates Israel's current attack on Hamas and Gaza: destroying the infant rapprochement between the two Palestinian parties and thus easing the international pressures on Israel to end the occupation of the West Bank and the isolation of Gaza. That just doesn't fit into the prevailing mythic framework.

Of course Israel's strategy is shaped by its own long-standing mythology. I've called it the myth of Israel's insecurity -- the story that says Jews will always be under attack from enemies who want to destroy their state simply out of anti-semitic hatred. Avnery calls it "the ghetto reflex, formed by centuries of persecution, for Jews to stand together against the evil goyim [gentiles]." This myth is now powerful enough among Israeli Jews to drive the political policies of their government.

Every political myth has some elements of fact wrapped up in its imaginary structure. Surely there is anti-semitism among some Palestinians. Surely Hamas is under pressure from other militaristic factions in Gaza and therefore uses its rockets to keep its political power. Surely there is now such a long history of animosity that it's a difficult cycle to break.

But in myth the imaginary overwhelms the factual, dictating that many facts -- often the most crucial facts -- be left out.

So the Israeli government, and the vast majority of Israeli Jews, ignored the obvious fact that whoever kidnapped and presumably killed those three Israeli teenagers did not act on behalf of Hamas, much less the Palestinian people as a whole. On the contrary, the kidnappers no doubt intended to break up the reconciliation of Fatah and Hamas. They were able to understand, as clearly as Avnery, that the Israelis would react with violence and thus undermine the reconciliation. Tragically, as so often, the extremists on both sides became partners in pushing toward a common goal.

More basically, the Israelis have ignored for years the Hamas offer of a long-term truce during which the two sides would negotiate a permanent peace, including a de facto recognition of Israel by Hamas.

Here in the U.S., the Hamas offer was beginning to get some notice a couple of years ago; there was a glimmer of possibility that a new myth, more true to the facts, was in the making.

But now it has disappeared. Hamas is routinely described as "committed to Israel's destruction." That, too, is once again part of the prevailing mythology, making it easier for U.S. media to restrict coverage of the current events to the "tit for tat" and "good guys against bad guys" myths.

The combination of these two myths dictates that Americans must be given the Israeli version of events: The kidnappers become not isolated individual criminals but merely "Palestinians," and the mythic tale of Hamas, or perhaps simply "the Palestinians," launching a deadly attack on an innocent Israel now passes for reality. Meanwhile, the obvious strategic purpose of Israel's response is ignored.

Yet the history of the U.S. mass media's reporting on Israel shows that mythic frameworks can change. Another change, bringing myth closer to reality, is always possible. And if not now, as a famous Jew once said, when?