Mark Byrnes is an associate professor of history at Wofford College in Spartanburg, SC.

Tolstoy gave expression to the latter idea in War and Peace: 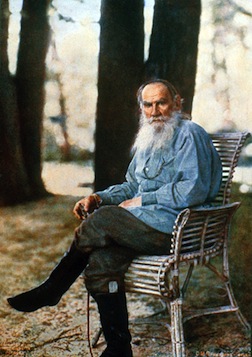 While the wide, long-term perspective employed by Tolstoy in this passage is familiar to historians, two articles in the popular press prompted by the anniversary of the beginning of World War I show the great appeal of focusing on the individual. Writing in the Wall Street Journal, Peggy Noonan details the toll taken by the war on the leaders of major states: Germany’s Kaiser Wilhelm II, England’s King George V, Russia’s Czar Nicholas II. In the Washington Post, Graham Allison examines how two of those three leaders (“Nicky and Willy”) tried to prevent the war.

Each article in its own way is trying to manage the enormity of the war by encapsulating it in the experience of individuals. For Noonan, “such destruction, such an ending of worlds” is too much grasp with mere statistics (such as perhaps 20 million or more killed and as many more wounded). So instead she gives her readers the pathos of Wilhelm becoming a “’broken man’—depressed, lethargic, ill”; George touring the front and having “aged overnight, his beard turning almost white”; Nicholas being reduced to "a perfectly incomprehensible state of helplessness."

Allison evokes the tragedy in the outbreak of war by reminding readers that “Nicky and Willy” went to war with each other despite being cousins “who vacationed together, hunted together and enjoyed dressing up in the uniforms of each other’s military officers when sailing on their yachts.” Allison notes that the Czar and the Kaiser were “were caught in what Henry Kissinger has called a ‘doomsday machine’: a network of interlocking alliances and military mobilization timetables that allowed the march of events to overcome their best efforts.”

Both articles try to make the complex accessible to the reader by humanizing history. But do they truly illuminate the history, or merely dramatize it?

Noonan, I argue, does mostly the latter. She is trying to grapple with the enormity of the impact of the war, but by focusing on its impact on the “great men,” she illuminates little. Suppose, for the sake of argument, that the leaders had not been particularly broken by the experience: would that in any way diminish the horror and devastation of the war, or alter its historical significance? Not at all. Whether she intends to or not, Noonan instead cheapens the costs and impact of the war by focusing so on these three men.

Allison, in contrast, has the historian’s purpose—to show what he calls the “perils of crisis management — and the wisdom of preventive diplomacy to resolve challenges like today’s territorial dispute in eastern Ukraine before they become crises that suck great powers into confrontations.” Despite that clear intent, by detailing the correspondence of the two royals (mostly to the exclusion of the other pressures and persons working toward the outbreak of war), Allison suggests that those two leaders might indeed have had the ability to thwart the decades of momentum leading to that moment: “Had the kaiser and the tsar started sooner and been better statesmen, they might have prevented a world war that in the end both of them would lose.”

His conclusion leaves open important questions: how much sooner need they have started? Days, or weeks, or months, or years? What precise form would better statesmanship have taken, and how would it have overcome the forces leading toward war? In such a small piece, Allison clearly did not have room to answer such big questions.

That is, of course, the dilemma when we try to make complex history accessible and useful to a wide audience. Allison is no doubt correct about the importance of preventive diplomacy. However, given his close attention to the last-minute attempts of these two individuals, readers might easily conclude that relatively small changes—diplomacy that began a little earlier, that was a little smarter—could have headed off something big.

The attraction of that notion is obvious: it evokes the exciting trope of the heroic figure swooping in at the last possible moment to save the day. But that is exactly what Allison is warning us against—the idea that we can count on crisis management to save us. It did not work in this case. His own earlier work on the Cuban missile crisis shows that leaders must tackle the difficult task of creating policy consensus within their own bureaucracies, for example, and shows the constraints limiting the choices of even the individual “rational” leader.

Removing the individuals from the story and looking at great forces, however, is also risky. Elsewhere in War and Peace, Tolstoy writes:

As in a clock the result of the complex movement of numberless wheels and pulleys is merely the slow and measured movement of the hands pointing to the time, so also the result of all the complex human movements of these hundred and sixty thousand Russians and French—all the passions, desires, regrets, humiliations, sufferings, bursts of pride, fear, rapture—was merely the loss of the battle of Austerlitz, the so-called battle of the three emperors, that is, a slow movement of the world-historical hand on the clockface of human history.

Lose the individual in history and we lose the “passions, desires, regrets, humiliations, sufferings, bursts of pride, fear, rapture,” the very things that make history so compelling. None of us wants to feel like one of those “numberless wheels” and none of wants to simply watch the “slow movement of the world-historical hand on the clockface of human history.”

Accessible history must incorporate individuals without indulging in the kind of sentimentalism offered by Noonan. Its “lessons,” to the extent that there are any, must also avoid too great a focus on short-term choices and remind us how the accumulation of many decisions over many years (or even decades, or centuries) can narrow the effective range of choices available even to the most powerful leaders.

There are forces in history that even good will and great power cannot overcome.