I Don’t Like It, So It Must Be Art

On vacation in Europe, my wife and I visited several art museums. The exhibits were interesting, sometimes beautiful, except when they paid allegiance to "conceptual art" and its associates — performance art, installation art, minimalism, and the like. These works merit quotation marks around "art" because often their point is to question sardonically the definition, meaning, and worth of art itself.

Colleges have for years educated students about such classics as Marcel Duchamp's 1917 work "Fountain" and Kasimir Malevich's 1918 painting "White on White." "Fountain" was merely a urinal signed and displayed as a sculpture. "White on White" is now on display in the Museum of Modern Art (MOMA) in New York City. It was not simply a piece of canvas, painted white and framed, but actually showed brush strokes; it portrays a tilted bluish-white square on a background of grayish white. Some time later, artists went Malevich a step further by hanging simple pieces of canvas, painted white or another color1 by rollers to eliminate brush strokes. Some have a straight line across them, dividing one color from a second. Others contain an entire square in that second color.

This is, of course, "minimalism."

In the last half century, millions of museum-goers have stood before such works and muttered, "I could do that!" Few ever do, partly because they mean the sentence as a disparagement, not a plan.

Museum Ludwig in Köln displays such a piece, "Water," by Rosemarie Trockel. In 2004, "Water" won the Wolfgang Hahn Prize of the Gesellschaft für Moderne Kunst (Society for Modern Art), allied with the Ludwig. This award carries a lot of prestige as well as "up to" 100,000 euros (about $134,000). 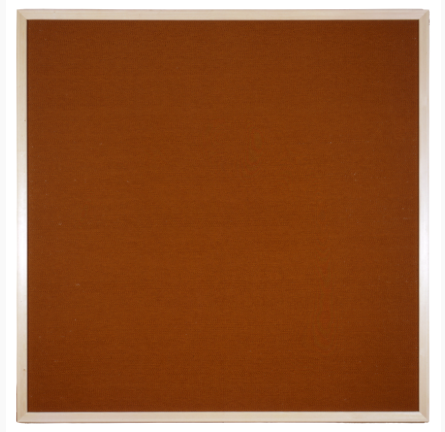 To the untrained eye, "Water" seems to be a large square of cloth, uniformly rust colored. However, as guest juror Dr. Silvia Eiblmayr tells, it's not as simple as that:

Rosemarie Trockel had a knitted image made, this time by hand, in which, so to speak, various handwritings can be detected. A monochrome, but not quite homogeneously structured image, because of the different 'knitting temperaments' (its title is Water), which is mounted on a canvas-covered frame and then enclosed once again by a light-colored frame. Produced with the very specific conception of a 'painting-machine,' the knitted image will find its multiple references to the icons of Museum Ludwig, but also, with aesthetic wit, to the stone floor whose colour it will absorb.

My untrained eye, incidentally, saw no handwork in the knitting, let alone "different temperaments." I think Eiblmayr probably got it right the second time: a machine knit the cloth. On its lower floors, Museum Ludwig does have some fine works of art. Most are flat, some are square, and a few incorporate a rusty brown color somewhere. Other than sharing those characteristics, "Water" does not refer to them.

John Cage pioneered minimalism in music with his notorious 1952 composition "4' 33." A pianist comes out, sits at the keyboard for four minutes and thirty three seconds, then stands to acknowledge the applause of the audience.

I realize that those of you in the intelligentsia, or at least those in that subset of the intelligentsia known as the cognoscenti, have already written me off as a barbarian if not a buffoon for the foregoing. "Merely a urinal" indeed! Maybe it was a urinal, but Duchamp's calling it art changed everything, you dolt! And yes, Loewen, while you could go home and paint a canvas white, you didn't, and even if you did, you didn't do it first. You could also sit at a piano for five whole minutes, but that doesn't count. That's not art.

Well! It happens that in 1967, when I was a graduate student in sociology at Harvard University, I bought some burlap cloth, also rust-colored. For some time, I kept it around. I was going to build a frame for it, stretch it over, then put thin black-painted slats around it as an outside frame, followed by shiny aluminum slats outside the black. The aluminum would form a "floating frame," adding some drama. I think I even finished the project, although I lost custody of it in divorce. But that does not matter. As the famed American artist Sol LeWitt put it, also in 1967, "In conceptual art the idea or concept is the most important aspect of the work." I had the concept first! As LeWitt himself notes, "the execution is a perfunctory affair."

The real problem is that no one has acknowledged that I am a great conceptual or minimalist artist who antedated Trockel by some 37 years. I do have an oeuvre, by the way. Three years after the burlap, I constructed a bas relief that I titled "I Saw the Figure Four in Pine." Made from children's blocks (by then we had two kids), it was wholly abstract, although some of the blocks that stood out seemed to form a "4." The title was a reference to "I Saw the Figure Five in Gold," a major work by Charles Demuth, but of course only the cognoscenti would get that. My friend Alice Walker, soon to become famous as poet and novelist, liked the work so much as to ask if I'd make one for her. I did, and in return she gave me a work of art illustrating a poem about Mississippi by Rosellen Brown.

Despite that body of work, no one has said of me what Eiblmayr said of Trockel:

Here, as in her entire oeuvre, Rosemarie Trockel`s great art is her comprehensive critical epistemological and poetic knowledge of things and their gestalt. She is very close to them in a fascinating form, but then assumes distance again by displacements, inversions and refractions.

"Comprehensive critical epistemological and poetic knowledge of things and their gestalt!" Holy poopy! To think that all I saw was a piece of rust-colored cloth!

The Ludwig devotes an entire floor to such pretense. One work consisted of nine large panes of glass, mounted at a slight angle to the vertical, each separated by about half an inch. The artist titled it, as I recall, "Nine Panes of Glass." I could not argue with that. Many other works were simply titled "Untitled." Again, I could not argue, since their subjects and meanings eluded me, too.

This October, the Ludwig will mount an entire exhibit, "Stains, 1969," by the American artist Ed Ruscha. Ludwig waxes about this attraction: "Instead of applying paint to the surface of a canvas he dripped fluids — a total of 75, from tap water and coffee to blood, nail polish, and sulfuric acid — on paper. They left behind the most diverse stains." 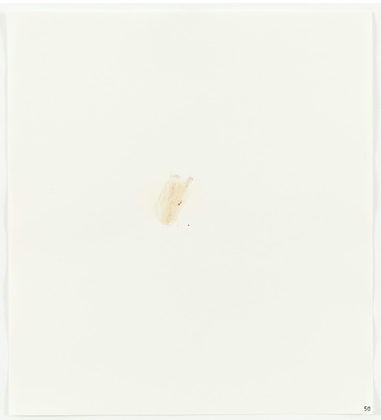 According to the Ludwig, this series was "pioneering for his oeuvre." I submit we all have done work like that! Had we just thought to save our collection of Bounty towel squares, such work might have been "pioneering for our oeuvre." Again, concept is key, along with some inflated commentary by an art critic.

In 2008, the science fiction writer John Scalzi displayed a related work of “art” and wrote a hilarious article about it, “I Don’t Know Art, But I Know What I Like.” The artwork is a roll of toilet paper shredded by his cat. Scalzi added the title, “I Will Be There At The End of All Things, or, The Shreddination.” His article provides some wonderfully ponderous explication, mocking the prose style of the Ludwig and other art museums. I would quote him, except part of my purpose in writing this article is to get you to visit his very brief web page yourself.

Unfortunately, galleries in lesser-known centers of art emulate rather than mock big-city institutions like the MOMA and the Ludwig. The Hafnarhú, part of the Reykjavik Art Museum,2 displays, inter alia, sheets of white paper that are not uniformly white. They contain faint smudges on one half. So it goes. Such art says nothing about Iceland, nothing about the artist's relationship to Iceland, indeed, nothing at all. Johannes Kjarval, featured in another building of the Reykjavik museum, famously said, “Art is too serious to be taken seriously.” Smudge artists ask us to take seriously stuff that they don’t really consider even to be art.

Of course, not all pictorial art need be local. Nor must it even be representational. Icelandic artists have as much right to participate in the currents of world art as do artists in New York City. The Icelandic smudges are merely visual versions of "4' 34," however. They don't "advance" art, if indeed art is progressive in the first place.3 They simply repeat a gesture. So do most of the examples of conceptual art in the Ludwig, Amsterdam's Stedelik Museum, etc.4 They don't try to engage the viewer. They don't show what the artist finds interesting about his/her subject. On the contrary, these works are "post-engaging" and "post-interesting" as well as "post-modern." The artists seem to be engaged only in pissing us off, the audience, and not even to be seriously absorbed in that arid task.

Or maybe I'm a barbarian if not a buffoon. Up to you!

1    Yes, I know that strictly speaking white is not a color.

2 Can you guess which airline we took home?

3    Remember Picasso's exclamation upon first seeing the Lascaux cave pictures: "We have discovered nothing!"

4    For the record, other floors of the Ludwig and Stedelik museums and other branches of the Reykjavik museum display much more interesting art, at least to me.