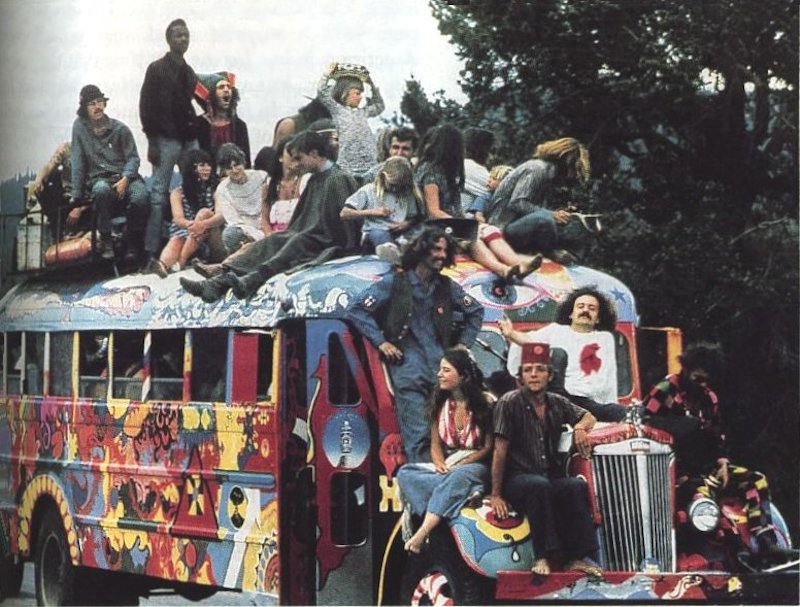 Hippies have a bad reputation, especially among conservatives. In 1967, the “National Review” said that hippies were self-indulgent and had a “horrified rejection of work and production”. Their thinking, “if indeed thinking it can be called, is more like orgiastic love-spluttering than coherent thought.” They might cause “outbreaks of polio and typhoid”.

The most popular speaker at the 2015 Conservative Political Action Conference, Duck Dynasty star Phil Robertson, received a huge applause for claiming that millions of cases of STD’s today are “the revenge of the hippies!”

Even less hysterical commentators still want to blame hippies for all of our ills: in 2010, David Brooks of the NY Times blamed the hippie “agenda” for the New York City crime wave of the 1970s.

Historians also saw hippies as scapegoats. In The Unraveling of America (1984, p. 277), Allen J. Matusow asserted that they did not believe in reason, progress, order, achievement, or social responsibility, probably because “Few hippies read much”. More recently, Micah Issitt said in Hippies: A Guide to an American Subculture (2009, p. 64-5) that hippies were personally irresponsible, poor parents, and unwilling to contribute to anything more than their own pleasure, and he blamed hippie advocacy of free love for climbing divorce rates.

These stereotypes of hippies were created by people who hated them and didn’t want to understand them.

Hippies utterly rejected the consumer life. They believed that watching the clock, dressing for success, and hoping for the next raise damaged the soul. Hippies put a lot of stress on stress. Unlike most people, they were willing to make big sacrifices to avoid stress. The anxieties of modern working life, the pressures of schedules, and the confrontations with authority were not worth the hassle. At a time when daily life was being compared to a rat race, hippies wanted to leave it all behind.

Hippies took spirituality seriously. They created lives far out of the mainstream in order to preserve and nurture their spirit. Traditional gods did not play a big role in hippie spirituality. Some remained with traditional religions, but tended to worship on their own. Many, perhaps most, hippies imagined their own spiritual worlds, blending the social gospel of Western faiths with the inward search of some Eastern beliefs. A love of nature often focused on the Earth as a living being and maternal symbol. In religion, as in every area of belief and behavior, hippies were independent spirits.

Hippies did not get in your face. They didn’t send out mailers or make phone calls or knock on doors or shout into microphones. They didn’t believe that their way was necessarily better for everyone. They wanted to do their own thing.

Hippies were peaceful. That attitude went far beyond signs and symbols, and was more profound than opposition to the Vietnam War. Hippies thought that peace is meant to rule our daily lives, from international relations to the family home. When they raised two fingers and said “Peace”, they converted a plea for cooperation into a daily greeting.

Hippies abhorred violence. For trying to escape or end the draft, they were labeled cowards, but they were not. They stood up to the entire straight world, including every familiar figure of authority, to say “No,” we don’t want that life. The hippie approach to violence has been forever symbolized in the 1967 photo of a protester putting a flower into a National Guardsman’s gun in front of the Pentagon.

Hippies got high. That didn’t distinguish them from normal folks. They used a different set of drugs – not depressants like alcohol or pills, but marijuana and psychedelics, including LSD, peyote and mushrooms. Their infrequent bad trips were only bad for themselves. They were less likely to drive drunk or get into brawls than the people who criticized them for using dope.

Hippies were ahead of their time. Their unconventional ideas about gender equality, their acceptance of a variety of sexualities, and their preference for organic products and vegetarian diets are now widely accepted. “Question authority” is now a bumper sticker, but few actually reject social authority as profoundly as did the hippies.

Hippies were less likely to cause trouble than most people. Hippie “crime” was typified by the illegal planting of flowers in People’s Park in Berkeley in 1969. But that didn’t stop people from causing trouble for them. They were called lazy, irresponsible and un-American. Hippie rejection of conventional American life made them pariahs in a country supposedly founded on individualism and freedom.

Conservative attitudes toward hippies demonstrate the shallowness of right-wing libertarianism. Rejection of authority only means rejection of government. Liberty means freedom from taxes. Politics is war.

Enough to make the real libertarians want to tune in, turn on, and drop out.

Published in the Jacksonville Journal-Courier, March 31, 2015